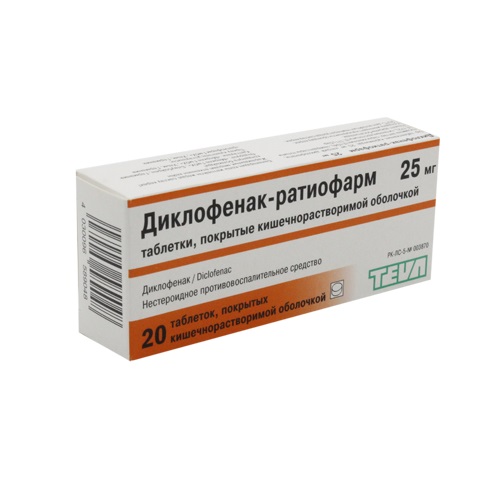 the Trade name
of the Диклофенак-ратиофарм® 25, 50 tablet, coated

Pharmacokinetics Later properties of intake the maximum concentration of diclofenac in blood is reached on average in 2.5-3 hours. Diclofenac contacts blood albumine for 99%. Gets into synovial fluid. It is metabolized in a liver. 60% of drug are removed by kidneys in the form of metabolites, less than 1% – in not changed look, the rest is removed in the form of metabolites with bile.
The pharmacodynamics
of the Диклофенак-ратиофарм® 25, 50 tablet, coated, belongs to non-steroidal anti-inflammatory drugs. Renders expressed the anti-inflammatory, anesthetizing and moderate febrifugal action.
The mechanism of effect of diclofenac is caused by suppression of activity of enzyme of cyclooxygenase therefore reactions of an arachidonic cascade are blocked and synthesis of PGE2, PGF2α prostaglandins, A2 thromboxane, prostacyclin, leukotrienes and emission of lizosomalny enzymes which play a major role in pathogenesis of inflammation, pain and fever is broken. Diclofenac suppresses aggregation of thrombocytes. In rheumatic diseases diclofenac reduces a joint pain at rest and at the movement, morning constraint, a swelling of joints, improves their functional capacity. At the inflammatory processes arising after operations and injuries quickly facilitates both spontaneous pain, and an oxycinesia, reduces inflammatory hypostasis on the place of a wound.

Indications
– acute arthritises of various genesis (including gout)
– chronic arthritises, including a pseudorheumatism, juvenile chronic polyarthritis
– an ankylosing spondylitis (Bekhterev’s disease) and other spondylarthrites
– arthroses and spondylarthroses (degenerative diseases of joints and a backbone)
– rheumatic defeats of soft tissues
– painful hypostasis and inflammations of soft tissues of the musculoskeletal system after injuries and surgeries
– not rheumatic inflammatory states which are followed by a pain syndrome.
The route of administration and doses
take the Drug inside, without chewing, with enough liquid directly to or at the beginning of meal. At hypersensitivity of a stomach the drug is taken in the end or after meal. In acute pains it is recommended to accept before meal since administration of drug after meal complicates intake of active ingredient in blood.
Dosages and duration of treatment are established by the attending physician depending on features of a course of the disease and weight of a state. In rheumatic diseases the drug treatment can be long.
The recommended dose for adults fluctuates within 50-150 mg the day divided into 1-3 receptions.

Side effects
Infrequently (0.1-1%)
– a headache, sleep disorders, feeling of fatigue, irritability, excitability, dizziness, dysmnesias, a disorientation, feeling of fear, a spasm, a tremor, depressions
– disturbances of taste, a visual disturbance (doubling in eyes or illegibility of perception), sonitus with a hearing disorder
– nausea, vomiting, a diarrhea, including, with blood impurity which in exceptional cases can lead to anemia
– lack of appetite, spasms in a stomach, feeling of overflow
– gastrointestinal tract diseases which can be followed by ulcerations mucous that in rare instances leads to emergence of blood in a chair or a hematemesis or to a diarrhea, the followed severe pains in epigastriums
– increase in level of transaminases in serum
– hepatitis with or without jaundice
– a renal failure, a proteinuria, a hamaturia or damage of kidneys (interstitial nephrite, a nephrotic syndrome, necrosis of nipples)
– an itching, rash
Seldom (0.01-0.1%)
– symptomatology of aseptic meningitis with tension of occipital muscles, headaches, nausea, vomiting, fervescence and disturbance of consciousness. Patients with autoimmune diseases (system lupus erythematosus, the mixed collagenoses)
– a pneumonitis
– stomatitis, inflammations of language, an ulcer of a gullet, the complaint to pains in the bottom of a stomach (the nonspecific bleeding inflammations of a large intestine, exacerbation of Crohn’s disease or ulcer colitis), constipations, inflammation of a pancreas (pancreatitis)
– reduction of volume of the emitted urine, hypostases, the general feeling of weakness, symptoms of a renal failure
– urticaria, a hair loss, hypersensitivity to light, eczemas, an erythema are predisposed to such reactions, dot hemorrhages in skin
– hemopoiesis disturbance (anemia, a leukopenia, an agranulocytosis, thrombocytopenia) is rare. Can be the first signs – fervescence, a sore throat, superficial wounds in a mouth, complaints to a grippopodobny state, bleedings from a nose and skin, prostration.
Very seldom (less than 0.001%, including separate cases)
– hemolytic anemia
– hepatitis with a lightning course without prodromal syndrome
– a syndrome Stephens-Johnson, a Lyell’s disease
Diclofenac slows down aggregation of thrombocytes that demands constant control of a hemostasis from patients with disturbances of blood clotting.
– reactions of supersensitivity to diclofenac in the form of face edemas, swelling of language, swelling of a throat with narrowing of air ways, breath difficulty, up to an attack of asthma and threat of shock
– deterioration in a course of the inflammatory processes caused by an infection (for example, development of a necrotizing fascitis). It is perhaps connected with the mechanism of effect of non-steroidal anti-inflammatory drugs. Therefore if at use of Diclofenac there are symptoms of an infection or deterioration in already available infectious disease, urgent medical inspection for the purpose of detection of indications is necessary for therapy by antibiotics.
– other side effects: peripheral hypostases, it is rare – heartbeat, stethalgias, increase in blood pressure, heart failure.

Contraindications
– hypersensitivity to diclofenac, or to other components of medicine
– disturbances of a picture of blood of not clear genesis
– an erosive canker of a stomach and/or intestines
– a full or incomplete combination of bronchial asthma, the nose recuring a polypose and near-nasal bosoms and intolerance of acetylsalicylic acid or other NPVP
– active gastrointestinal bleeding
– inflammatory bowel diseases
– the period after aortocoronary shunting
– the progressing diseases of kidneys, a heavy renal failure (KK less than 30 ml/min.)
– an active disease of a liver, heavy liver and heart failure
– the III trimester of pregnancy, the lactation period
– a proctitis, hemorrhoids
– children’s and teenage age up to 18 years

Medicinal interactions
At simultaneous use Диклофенак-ратиофарм® 25.50 tablets, coated, and:
– digoxin, Phenytoinum or drugs of lithium the level of content in plasma of these medicines can increase,
– diuretics and antihypertensives action of these means can be weakened,
– kaliysberegayushchy diuretics the hyperpotassemia can appear,
– other non-steroidal anti-inflammatory drugs or glucocorticoids the risk of emergence of by-effects from digestive tract increases,
– acetylsalicylic acid – decrease in level of diclofenac in blood serum is possible,
– selective serotonin reuptake inhibitors – risk of developing bleedings from digestive tract increases,
– a methotrexate can lead to increase in concentration of a methotrexate and to strengthening of its toxic action,
– cyclosporine, paracetamol toxic impact of the last on kidneys can increase,
– anticoagulants, antiagregant and thrombolytic medicines risk of developing bleedings increases,
– antidiabetic means can cause the necessity of increase in dosages of the last therefore at such combined treatment the control of level of sugar in blood is necessary,
– somnolent medicines – easing of effect of the last,
– a tsefamandola, a tsefaperazona, a tsefotetana, valproic acid, a plikamitsin – risk of developing a prothrombinopenia,
– a probenetsida, Sulfinpyrazonum – is possible diclofenac excretion delay,
– ethanol, colchicine, corticotropin, drugs of a St. John’s wort made a hole – raises risk of developing bleedings from digestive tract,
– medicines, causing a photosensitization – risk photosensitizing effect of diclofenac,
– medicines, blocking canalicular secretion – increase in level of diclofenac in blood serum,
– antibacterial medicines from group of a hinolon – risk of developing spasms is possible.

Special instructions
For reduction of risk of development of the undesirable phenomena from digestive tract it is necessary to use a minimal effective dose minimum possible short course.
When performing long therapy it is necessary to control function of a liver, a picture of peripheral blood, the analysis a calla on the occult blood. In case of increase in activity of hepatic transaminases or at emergence of symptoms of hepatotoxicity (nausea, fatigue, drowsiness, diarrhea, a skin itching, jaundice) it is necessary to stop administration of drug. Diclofenac (as well as other NPVP) can cause a hyperpotassemia.
At the following states drug can be appointed after careful assessment of a ratio advantage/risk:
– the induced porphyria
– a system lupus erythematosus and the mixed diseases of connective tissue
– the I and II trimesters of pregnancy
– diseases of digestive tract and/or inflammatory and ulcer
diseases of digestive tract (ulcer colitis, Crohn’s disease) in the anamnesis
– the previous injuries of kidneys and/or heavy abnormal liver functions (in these cases the reduction of doses or lengthening of time between receptions is required)
– high arterial blood pressure and/or heart failure
– senile age
– directly right after heavy surgical intervention
– carefully to use drug at patients with bronchial asthma, allergic rhinitis, polyps mucous a nose and also in chronic obstructive respiratory diseases and persistent infections of airways in connection with danger of emergence of an attack of asthma, Quincke’s edema or urticaria. Similar precautions are necessary also at patients who had allergic reactions (skin reactions, an itching, urticaria) to analgetic and anti-inflammatory drugs.
It must be kept in mind that diclofenac reduces fertility at women.
Pregnancy and the period of a lactation
of the Диклофенак-ратиофарм® 25, 50 tablet, coated, have to be applied in the first and second trimester of pregnancy only if it is considered necessary absolutely
Features of influence of medicine on ability to run the vehicle or potentially dangerous mechanisms
during treatment reduction of speed of mental and motor reactions is possible therefore it is necessary to refrain from control of transport and other potentially dangerous mechanisms.

Overdose
Symptoms: a headache, dizziness, hyperexcitability, the hyperventilation phenomena with the increased convulsive readiness, abdominal pain, nausea, vomiting, bleedings in digestive tract and/or abnormal liver functions and/or kidneys, children have myoclonic spasms.
Treatment: Specific antidote does not exist. In case of overdose it is necessary to cause vomiting, to appoint antacids and activated carbon. Symptomatic drug treatment.

A form of release and packing
On 10 tablets in blister strip packaging from a film of polyvinylchloride and printing aluminum foil. On 2 or 5 planimetric packs together with the instruction for medical use in the state and Russian languages put in a box of cardboard.

To Store storage conditions at a temperature not above 25C.
To store out of children’s reach!

Not to apply an expiration date of 5 years after expiry date!