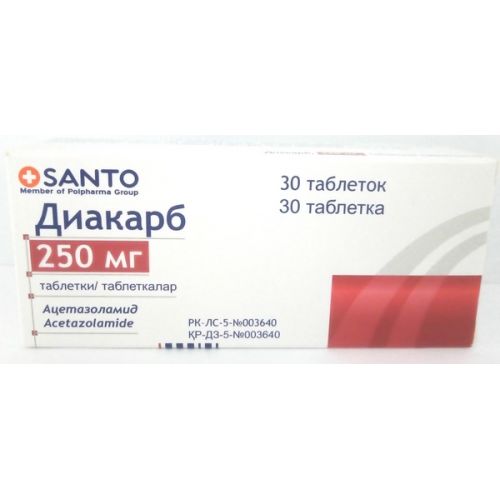 Description
of the Tablet of white color, round, biconvex.

Pharmacokinetics Acetazoleamide properties is well soaked up from digestive tract. After intake in a dose of 500 mg the maximum concentration (12-27 mkg/ml) is reached in 1-3 hours. In the minimum concentration keeps in blood within 24 hours from the moment of introduction. Acetazoleamide gets through a placental barrier, in a small amount gets to breast milk. Does not kumulirut in fabrics and it is not metabolized in an organism. It is removed by kidneys in not changed look. After consuming about 90% of the accepted dose are allocated with urine within 24 hours.
The pharmacodynamics
Acetazoleamide is powerful inhibitor of a karboangidraza with weak diuretic activity. The mechanism of action is connected with oppression of release of ions of Na + and H+ in a molecule of carbonic acid. The inhibition of activity of a karboangidraza acetazoleamide suppresses synthesis of carbonic acid in a proximal tubule of nephron. The lack of carbonic acid which is a source of the ions of H+ necessary for replacement by Na ions + increases excretion by kidneys of sodium and water. As a result of discharge of large amounts of sodium in a distal part of the nephron caused by acetazoleamide the substitution of ions of Na + increases by K+ ions that leads to big losses of potassium and development of a hypopotassemia. Acetazoleamide increases excretion of bicarbonates that can lead ment of a metabolic acidosis. Acetazoleamide causes removal with urine of phosphates, magnesium, calcium that can also lead to metabolic disorders.
In 3 days from the beginning of use acetazoleamide loses the diuretic properties. After a break in treatment for several days again appointed acetazoleamide resumes diuretic action because of recovery of normal activity of a karboangidraza.
Extrarenal effect of acetazoleamide is used for treatment of glaucoma. Oppression of a karboangidraza of a ciliate body reduces secretion of watery moisture of an anterior chamber of an eye that lowers intraocular pressure.
Drug is used as supportive application at treatment of epilepsy. The karboangidraza inhibition in neurons of a brain brakes pathological excitability.
Acetazoleamide is used for treatment of liquorodynamic disturbances and intracranial hypertensia. Drug suppresses activity of a karboangidraza in a brain, in particular, in textures of ventricles with decrease in products of cerebrospinal fluid.
Acetazoleamide changes an acid-base state towards a metabolic acidosis that is used for treatment of respiratory disorders, including sleep apnoea syndrome of the central genesis.

Indications
– an edematous syndrome, including heart failure, swell, caused by drugs and (weak and moderate expressiveness, in combination with an alkalosis)
– a chronic open angle glaucoma, secondary glaucoma, closed-angle glaucoma (for decrease in intraocular pressure at short-term preoperative treatment and before the ophthalmologic procedures capable to provoke a bad attack of closed-angle glaucoma)
– epilepsy (in a combination with other anticonvulsants) in small attacks (petit mal) at children and big (grand mal) at adults, at the mixed forms
– increase in intracranial pressure (benign intracranial hypertensia, intracranial hypertensia after shunting of ventricles).

The route of administration and doses
take the Drug inside. In case of the admission of administration of drug, at the next reception not to increase a dose.
An edematous syndrome
the Initial dose of drug makes 250 – 375 mg (1 – 1½ tablets) 1 time a day in the morning. If after an initial dose at the patient the edematous syndrome does not decrease, it is not recommended to increase a dose.
The maximum diuretic effect is reached at administration of drug every other day or two days running, then – a one-day break.
At treatment of heart failure Diacarbum is appointed against the background of the standard therapy (for example, prescribing of cardiac glycosides, drugs of potassium, a diet with the reduced content of sodium).
Glaucoma
the Dose of drug should be defined individually according to the size of intraocular pressure.
Open angle glaucoma: 250 mg (1 tablet) of 1 – 4 time a day.
Doses higher than 1000 mg (4 tablets) do not increase therapeutic effect.
Secondary glaucoma: 250 mg (1 tablet) each 4 hours.
At some patients the therapeutic effect is shown after a dose of 250 mg (1 tablet) 2 times a day (at short-term therapy).

Dosage epilepsy for adults:
250 – 500 mg/days in one step within 3 days, for the 4th day a break.
At simultaneous use of acetazoleamide with other anticonvulsant drugs in an initiation of treatment apply 250 mg (1 tablet) of 1 times a day, gradually increasing a dose in case of need.
Dosages at children:
2 – 3 years: 50 – 125 mg/days in 1 – 2 reception,
4 – 18 years: 125 – 250 mg once in the morning.
At children it is not necessary to apply doses above, than 750 mg a day.
Intracranial hypertensia
Is recommended use of Diacarbum in a dose of 250 mg (1 tablet) in day or 125 – 250 mg (1/2 – 1 tablet) each 8 – 12 hours.
The maximum therapeutic effect is reached at reception of a dose of 750 mg (3 tablets) in day in equal doses.
At inefficiency of repeated lumbar punctures the use of drug in a dosage of 500 mg 3 times a day is possible.
Side effects
– paresthesias, hearing disorder or sonitus, drowsiness and a disorientation, sluggish paralysis, a photophobia
– loss of appetite, nausea, vomiting, a diarrhea, disturbance of taste, thirst, diarrhea, a polyuria, a melena
– a metabolic acidosis and disturbances of electrolytic balance
– temporary short-sightedness
– urticaria, an anaphylaxis, an acute anaphylaxis
– hepatic colic, hepatitis, cholestatic jaundice, a liver failure up to lightning necrosis of a liver
– renal colic, a liver and renal failure
– a crystalluria, a nephrolithiasis, an urolithiasis, a hamaturia, a glucosuria
– the increased temperature
– a headache, dizziness, fatigue, irritability, a depression, decrease a libido, drowsiness
– a hearing disorder and a ring in ears
– a hamaturia, a glucosuria, an agranulocytosis, thrombocytopenia, a leukopenia and aplastic anemia, a platelet purpura, insufficiency of marrow, a pancytopenia, rash in the form of a polymorphic erythema
– Stephens-Johnson’s syndrome, a Lyell’s disease.

Acidosis therefore it has to be applied with care at patients with a pulmonary embolism and emphysema of lungs can cause the special instructions Drug. Drug alkalizirut urine.
Acetazoleamide should be applied carefully at patients with diabetes in connection with the increased risk of a hyperglycemia.
Increase in a dose does not lead to increase in a diuresis, but can increase cases of drowsiness and/or paresthesia.
When planning long therapy, acetazoleamide recommends special precautionary measures. The patient needs to be warned about need of the address to the doctor at appearance of any unusual enanthesis.
Control of a picture of blood and thrombocytes in an initiation of treatment is recommended and it is regular during treatment and also to regularly control indicators of water and electrolytic and acid-base balance.
At sharp decrease in quantity of uniform elements of blood cells or emergence of toxic skin manifestations it is necessary to stop immediately therapy by acetazoleamide.
It is necessary to control behavior of the patients accepting acetazoleamide because of a possibility of emergence of depressive episodes with suicide thoughts.
It is necessary to be careful at elderly patients in connection with risk of emergence of obstruction of urinary tract.
Features of influence of medicine on ability to control of vehicles and to service of moving mechanisms
during administration of drug patients should not run motor transport and work with the mechanisms demanding the increased concentration of attention and speed of psychomotor reactions.

Overdose
Symptoms: strengthening of symptoms of side effects.
Treatment: symptomatic. In case of acidosis, bicarbonates are applied. The hemodialysis removes acetazoleamide from an organism.

To Store storage conditions in the dry, protected from light place, at a temperature not above 25 °C.
To store out of children’s reach.

the Owner of the registration certificate
of JSC Khimfarm, Kazakhstan

the e-mail address of infomed@santo.kz