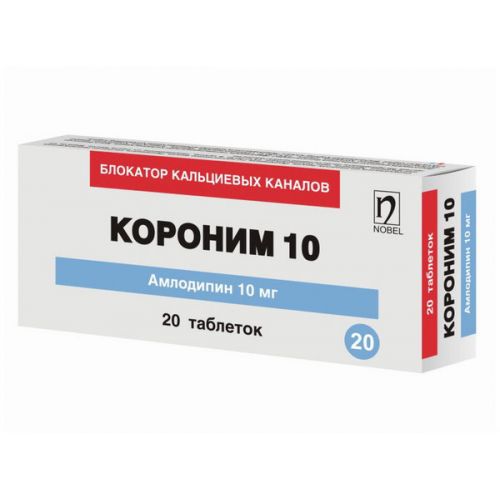 name Amlodipin Lekarstvennaya a form
of the Tablet of 5 mg, 10 mg

Pharmacokinetics Absolute Bioavailability properties of the drug KORONIM® makes 64-80%. The maximum concentration in blood plasma is observed in 6-12 hours. Amlodipin for 97.5% contacts proteins of blood plasma. Meal does not affect bioavailability of an amlodipin, gets through a blood-brain barrier.
Elimination from a system blood-groove is carried out in two stages, elimination half-life makes about 35-50 hours. This time does not increase in a renal failure. Stable equilibrium concentration in blood plasma is reached in 7-8 days of constant reception. Amlodipin is metabolized in a liver with formation of inactive metabolites out of which 60% are brought with urine, and 10% are removed in not changed look.
The pharmacodynamics
Amlodipin – active agent of the drug Koronim® is derivative dihydropyridine. Contacting dihydropyridinic receptors, blocks ‘slow’ calcium channels, inhibits transmembrane transition of calcium in cells of an unstriated muscle of heart and vessels (more – in smooth muscle cells of vessels, than in cardiomyocytes).
Renders hypotensive and anti-anginal effect. The mechanism of hypotensive effect of the drug Koronim® is caused by the direct weakening impact on unstriated muscles of vessels. Anti-anginal action is caused by expansion coronary and peripheral an artery and arterioles. In stenocardia reduces severity of ischemia of a myocardium. Expanding peripheral arterioles, reduces the general peripheric resistance of vessels, reduces the need of a myocardium for oxygen. Expanding the main coronary arteries and arterioles in invariable and ischemic zones of a myocardium, increases intake of oxygen in a myocardium (especially in vasospastic stenocardia). Prevents development of a konstriktion of coronary arteries (century of t. h caused by smoking).
At patients with arterial hypertension the single daily dose of Koronim provides a lowering of arterial pressure for 24 hours as in situation ‘lying’, and ‘standing’. Thanks to the slow beginning of action amlodipin does not cause a sharp lowering of arterial pressure.
At patients with stenocardia the single daily dose of drug increases tolerance to physical activity, delays development of an attack of stenocardia and depression of a segment of ST (on 1 mm) against the background of physical activity, reduces the frequency of attacks of stenocardia and consumption of nitroglycerine.
At the patients with cardiovascular diseases (including coronary atherosclerosis with defeat of one vessel and to a stenosis of the 3rd and more arteries and atherosclerosis of carotids) who had a myocardial infarction, transdermal transluminal angioplasty of coronary arteries (TLP) or having stenocardia, Koronim’s use prevents development of a thickening erotic-medii of carotids. Also Koronim’s use considerably reduces lethality from the cardiovascular reasons, a myocardial infarction, stroke, TLP, aortocoronary shunting, leads to decrease in number of hospitalization concerning unstable stenocardia and progressing of the chronic heart failure (CHF), reduces the frequency of the interventions directed to restoration of a coronary blood-groove.

the Route of administration and doses
Drug is appointed orally washing down with enough water (100 ml). Meal has no effect on absorption of drug from digestive tract.
The recommended initial dose makes 2.5 – 5 mg once a day. In arterial hypertension and stenocardia – 5 mg a day. Depending on individual reaction of the patient, the dose can be increased to maximum daily – 10 mg a day. Duration of treatment is determined by the attending physician.
Use for elderly people. It is recommended to apply in usual doses, change of a dose of drug is not required.
Use in a renal failure. It is recommended to apply in usual doses, however it is necessary to consider possible insignificant increase in T1/2.
Change of the mode of dosing of Koronim at simultaneous use of thiazide diuretics, beta blockers or inhibitors of the angiotensin-converting enzyme (ACE) is not required.

Side effects
– a headache, dizziness, drowsiness, fatigue
– tachycardia
– hyperaemia of the person
– nausea, an abdominal pain
– hypostases, including peripheral hypostases
Seldom
– disturbances of a heart rhythm (ventricular tachycardia,
an atrial flutter), bradycardia, thorax pain
– allergic reactions, including an itching, rash, a Quincke’s disease,
an exudative multiformny erythema
– arterial hypotension
– a leukopenia, thrombocytopenia
– a hyperglycemia
– changes of mood
– peripheral neuropathy, a tremor, a hypesthesia, paresthesias
– a syncope
– a perversion of flavoring feelings
– disorders of vision
– sonitus
– a vasculitis
– short wind, cough, rhinitis
– dispeptic disorders, dryness in a mouth, change of a chair,
a hyperplasia of gums, increase/decrease in body weight
– pancreatitis
– a hyperhidrosis
– an alopecia, discoloration of skin
– arthralgias, myalgias, muscular spasms, dorsodynias
– a pollakiuria, a dysuria, a nocturia
– decrease in potency, a gynecomastia
– the increased fatigue, an asthenia
Very seldom
– gastritis, hepatitis, jaundice, increase in level of hepatic transaminases
(generally with a cholestasia)
– a small tortoiseshell

of the Contraindication
– hypersensitivity to an amlodipin, other derivatives
of dihydropyridinic group or to the excipients
which are a part of drug.
– arterial hypotension (systolic arterial blood pressure
less than 90 ml rt St)
– collapse
– pregnancy and the period of a lactation
– vascular and cardiogenic shock
– children’s and teenage age up to 18 years (the efficiency and
safety are not established)
With care at:
– an abnormal liver function
– a sick sinus syndrome (profound bradycardia,
tachycardia)
– in a decompensation stage
– a mitral and aortal stenosis
– an acute myocardial infarction (and within 1 month after)

Special instructions
In rare instances at the initial stage of treatment inhibitors of calcium channels or at increase in a dose at patients with an obturation of coronary arteries aggravate stenocardia of heavy degree.
At sharply developed hypotension, patients need to be careful at use of other vasodilators with the profound stenosis of an aorta.
At use of the drug Koronim® for patients with chronic heart failure of III and IV functional class on classification of NUHA the edematization of lungs is possible.
The minimum initial doses are recommended to elderly patients.
To patients with heavy degree of a liver failure to appoint with care as amlodipin it is metabolized in a liver and elimination half-life increases.
Pregnancy and the period of a lactation
Safety of use of Koronim® during pregnancy and feeding by a breast is not established therefore use during pregnancy is possible only in case the advantage for mother exceeds risk for a fruit and the newborn.
Features of influence of medicine on ability to run the vehicle or potentially dangerous mechanisms
With care to apply in operating time to drivers of vehicles and people whose profession is connected with the increased concentration of attention (in an initiation of treatment the dizziness and drowsiness are possible)

Overdose
Symptoms: the excessive peripheral vazodilatation with a considerable lowering of arterial pressure, is possible reflex tachycardia.
Treatment: gastric lavage, prescribing of activated carbon, maintenance of function of a cardiovascular system, control of indicators of function of heart and lungs, giving to the patient of horizontal position with the raised legs, control of volume of the circulating blood and a diuresis. For restoration of a tone of vessels and the ABP if there are no contraindications, use of vasoconstrictive drugs (dopamine, noradrenaline) is possible. Use intravenous administration of a gluconate of calcium which can help with counteraction to blockade of calcium channels. The hemodialysis is inefficient.

A form of release and packing
On 10 or 14 tablets in blister strip packaging from a film of polyvinylchloride and printing aluminum foil. On 2 planimetric packs together with the instruction for medical use in the state and Russian languages place in a pack cardboard with the hologram of manufacturing firm

Storage conditions
At a temperature not higher than 25 ºС, in the dry, protected from light place.
To store out of children’s reach!