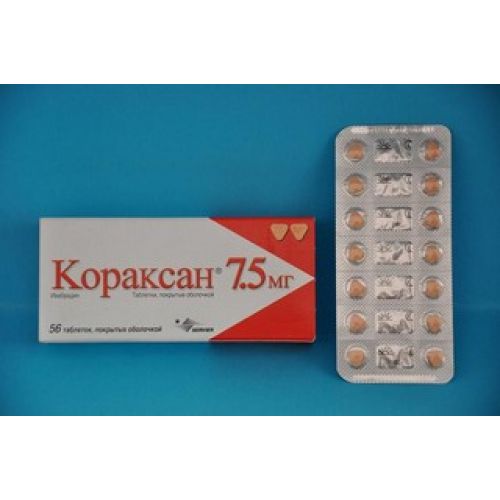 the Trade name
of Koraksan

Indications
– treatment of chronic stable stenocardia at the patients having a coronary artery disease with a normal sinoatrial rate and with ChSS rhythm ≥ 70 beats/min:
– at intolerance or contraindications to beta-blockers
– in a combination with beta-blockers at patients, at inadequate (insufficient) control of a state an optimum dose of beta-blockers, treatment of chronic heart failure of the II-IV degree on classification of NYHA (New York cardiological association) with systolic dysfunction, at patients with a sinoatrial rate, with clinical symptoms of chronic heart failure and ChSS ≥ 75 beats/min, in combination with standard therapy, including beta-blockers and also at intolerance or a contraindication of beta-blockers

the Contraindication sick sinus syndrome
– hypersensitivity to active agent or to one of excipients
– ChSS at rest prior to treatment is lower than 70 beats/min
– cardiogenic shock
– an acute myocardial infarction
– heavy hypotension (& lt, 90/50 mm Hg)
– a heavy liver failure
– a sick sinus syndrome
– sinuatrial blockade, unstable or
an acute heart failure
– existence of an electrocardiostimulator (if ChSS depends only on an electrocardiostimulator)
– unstable stenocardia
– atrioventricular block ІІІ of degree
– combination therapy with strong inhibitors of P450 3A4 cytochrome: azolny antifungal drugs (ketokonazol, itrakonazol), makrolidny antibiotics (klaritromitsin, erythromycin orally, dzhozamitsin, telitromitsin), by HIV protease inhibitors (nelfinavir, ritonavir) and nefazodony
– combination therapy with verapamil or diltiazem which are the moderate CYP3A4 inhibitors reducing ChSS
– pregnancy and the period of a lactation, the woman of childbearing age not applying contraceptive means
– the children’s and teenage age up to 18 years

Medicinal interactions
is not recommended the combined reception of an ivabradin with the drugs extending QT interval such as:
– cardiovascular drugs: quinidine, Disopyramidum, bepridit, sotalol, ibutilid, Amiodaronum
– the drugs which are not intended for treatment of diseases of a cardiovascular system (Pimozidum, ziprazidon, sertindol, meflokin, galofantrit, pentamidine, sizaprid, erythromycin for intravenous administration)
Kaliysberegayushchy diuretics (thiazide and loopback diuretics): the hypopotassemia can lead to increase in risk of developing of arrhythmia. As ivabradin can cause bradycardia, the received combination of a hypopotassemia and bradycardia is the contributing factor for manifestation of heavy arrhythmia, especially at patients with a syndrome of a long QT interval, regardless inborn or caused by drugs.
In need of purpose of such combinations it is necessary to carry out careful monitoring of cardiac performance.
Use of an ivabradin together with strong inhibitors of CYP3A4 enzyme (azolny antifungal drugs (ketokonazol, itrakonazol), makrolidny antibiotics (klaritromitsin, erythromycin orally, dzhozamitsin, telitromitsin), HIV protease inhibitors is contraindicated (nelfinavir, ritonavir), nefazodon).
Powerful inhibitors of an isoenzyme CYP3A4 – ketokonazol (once a day) and dzhozamitsin (1 g two times a day) – led 200 mg to increase in average exposure of an ivabradin in plasma by 7-8 times.
Combined use of drug with moderate CYP3A4 inhibitors is not recommended (diltiazem, verapamil, flukonazol). Joint reception is possible at an initial dose of 2.5 mg 2 times a day provided that ChSS at rest makes more than 70 beats/min, with carrying out monitoring of ChSS.
The inductors CYP3A4 (rifampicin, barbiturates, Phenytoinum, drugs of a St. John’s wort of made a hole (Hypericum perforatum)) lead to decrease in concentration in plasma and to reduction of activity of an ivabradin. The concomitant use can demand to dose adjustment of an ivabradin or reduction of doses of the above-mentioned inductors CYP3A4. During treatment ivabradiny administration of drugs of the St. John’s wort which is made a hole needs to be reduced.
The concomitant use of grapefruit juice increases exposure of an ivabradin twice in this connection during treatment ivabradiny it is necessary to reduce consumption of grapefruit juice.
Inhibitors of the protonew pump (omeprazolum, lansoprazol), sildenafit, inhibitors A-reductase hydroxymethylglutaryl coenzyme (simvastatin), blockers of calcium channels of group of hydropyridines (amlodipin, latsidipin), digoxin and warfarin do not render clinically significant interaction on pharmacokinetic and pharmakodinamichesky parameters of an ivabradin.
There are no restrictions for joint intake of inhibitors of angiotensin-converting enzyme, antagonists of receptors of angiotensin ІІ, diuretics, nitrates of the short and prolonged action, fibrat, oral antidiabetic drugs, aspirin and other antiagregantny means.

The special
instructions Koraksan it is appointed only for symptomatic treatment of chronic, stable stenocardia as it does not make positive impact on cardiovascular results.
That ChSS can change significantly eventually prior to therapy ivabradiny, when determining ChSS at rest results of serial measurements of a warm rhythm, the ECG or out-patient 24-hour monitoring and also in case of patients which are already accepting ivabradin, but who need to carry out a dose titration have to be considered. It concerns also patients with low heart rate, especially, when ChSS is lower than 50 beats/min or after a dose decline.
Koraksan it is inefficient for treatment and prevention of arrhythmias. There is a high probability of the fact that it loses the efficiency in case of development of a tachyarrhythmia (for example, a supraventricular or ventricular Bouveret’s disease). Therefore prescribing of drug is not recommended to patients with fibrillation of auricles or other types of the arrhythmias leading to depression of function of a sinus node.
At the patients receiving treatment ivabradiny the risk of development of fibrillation of auricles is increased. Fibrillation of auricles meets at patients more often, is combined taking Amiodaronum or the powerful antiarrhytmic drugs of class I.
It is regularly recommended to carry out monitoring of the patients accepting Koraksan regarding identification of fibrillation of auricles (constant or paroxysmal), in the presence of clinical indications the monitoring has to include the ECG.
It is necessary to warn patients about signs and symptoms of an atrial fibrillation and to advise to see a doctor in case of their emergence.
If the atrial fibrillation comes during treatment, it is necessary to weigh carefully a ratio of advantage and risk of continuation of treatment ivabradiny.
Patients with chronic heart failure with disturbances of intra ventricular conductivity (blockade of a ventriculonector at the left, blockade of a ventriculonector on the right) and a ventricular dissinkhroniya have to be observed adequately.
Prescribing of drug to patients with atrioventikulyarny blockade ІІ is not recommended to degree.
Reception of Koraksana right after the had stroke is not recommended.
Koraksan with care appoint to patients with slight or moderate arterial hypotension.
At patients with fibrillation of auricles or other types of arrhythmias, in view of insufficient amount of data on risk of developing excessive bradycardia, within 24 hours after reception of the last dose of Koraksana it is necessary to consider the possibility of carrying out in not urgent order of cardioversion by direct current.
Chronic heart failure
before therapy ivabradiny heart failure has to be stable. Ivabradin has to be applied with care patients with heart failure of the IV degree on classification of NYHA (New York cardiological association) in view of limited amount of data on this category of patients.
Ivabradin influences function of a retina and today there are no proofs of toxic influence on a retina, but the effect of an ivabradin at long reception (more than one year) is unknown. When prescribing drug the patients should be careful with a pigmentary retinitis (retinitis pigmentosa).
It is necessary to be careful when assigning Koraksana to patients with slight or moderate hypotension, in connection with insufficiency of data.
Patients with a congenital syndrome of QT or to the patients taking the drugs extending QT interval should carry out careful monitoring of cardiac performance.
The decrease in heart rate caused ivabradiny can cause additional lengthening of an interval of QT that can lead to heavy arrhythmia, including bidirectional tachycardia.
Drug contains lactose in this connection its reception should be avoided to patients with a hereditary lactose intolerance, deficiency of Lappa lactase or disturbance of absorption of glucose and a galactose.
Use in pediatrics
Prescribing of drug at children’s and teenage age up to 18 years is not recommended.
Features of influence of medicine on ability to run motor transport and potentially dangerous mechanisms
during drug treatment manifestation of temporary light feelings, generally in the form of phosphene in this connection it is necessary to be careful during the driving of motor transport or control of mechanisms in situations when there can be sudden changes of illumination, especially at night is possible.

The form of release and packing
On 14 tablets place in blister strip packaging from a film of polyvinylchloride and aluminum foil.
On 2 or 4 planimetric packs together with the instruction for medical use in the state and Russian languages put in a pack from cardboard.

the Owner of the registration certificate
of Les Laboratoires Servier (Le Laboratoir of Servye), France