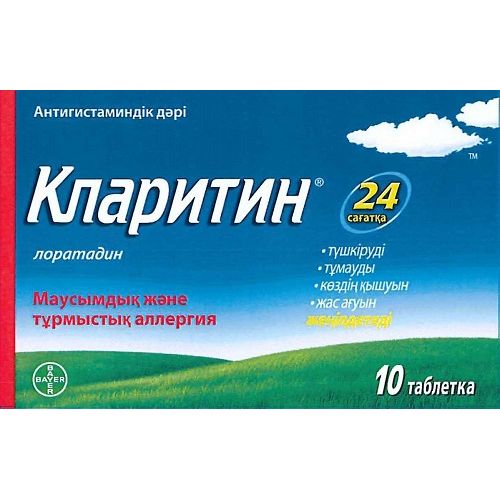 Oval tablets from white till almost white color, with risky for a break and an engraving in the form of a symbol a flask in a bowl and figure 10 on one party of a tablet and smooth on the other hand, free from visible foreign inclusions

Pharmacokinetics Loratadin properties is quickly soaked up and metabolized in

digestive tract. Semi-removal time in blood plasma of a loratadin is 1 hour, and its active metabolite 2 hours. Elimination half-life of a loratadin averages 8.4 hours (varies from 3 to 20 hours), and a dezloratadina of 28 hours (varies from 8.8 to 92 hours). Impact on the area under a curve concentration time (AUC) of metabolites is higher in comparison with influence of the loratadin.

Loratadin has higher affinity to blood plasma proteins (97% of 99%), in comparison with its active metabolites (73% of 76%).

It is removed with urine (about 40%) and a stake (about 42%) within 10 days, generally in the form of the conjugated metabolites.

Clinical trial revealed that the pharmacokinetic profile of a loratadin and its metabolites is comparable between young and elderly volunteers.

At chronic alcoholic damage of a liver of Cmax and AUC value of a loratadin increased twice though in general the pharmacokinetic profile at these patients not considerably differed from a profile at healthy patients. Elimination half-life at a loratadin and its metabolites makes 24 hours and 37 hours respectively and increases in a liver failure.

At most of patients of Klaritin does not show anticholinergic and sedative action, when using in the recommended doses.

At long-term treatment clinically significant changes of key indicators of the vital functions, indicators of laboratory tests, external examination or the ECG were not observed.

Loratadin has no significant activity concerning H2 receptors. Drug does not inhibit absorption of Norepinephrinum and practically does not influence the cardiovascular system or activity of a pacemaker of heart.

The antiallergic effect develops within the first 1-3 hours after administration of drug, reaches a maximum within 8-12 hours and 24 hours last. Development of resistance to effect of drug after 28 days of use of a loratadin was not noted.

Patients with a liver failure should appoint drug in lower initial dose as decrease in clearance of a loratadin is possible. For adults and children with body weight more than 30 kg the recommended initial dose makes 10 mg every other day.

Disturbance from the immune system is very rare: an anaphylaxis, including a Quincke’s disease

of Disorder from nervous system: dizziness,

Gepatobilliarny disorders: disturbance of functions of a liver

of Disturbance from skin and hypodermic cellulose: rash, alopecia

– the children’s age up to 6 years

At joint appointment with Klaritin alcohol does not influence the speed of psychomotor reactions.

Increase in level of a loratadin is noted that can be followed by increase in frequency of emergence of side reactions at joint appointment with CYP3A4 or CYP2D6 inhibitors. Though at joint reception with ketokonazoly, erythromycin and Cimetidinum noted increase in concentration of a loratadin in blood plasma, but this increase was not shown clinically in any way, including according to the ECG.

Patients with heavy disturbances of functions of a liver should appoint Klaritin with care.

Klaritin contains lactose. Therefore he should not be appointed to the patients having the rare hereditary diseases connected with intolerance of fructose, deficiency of Lapp-lactases enzyme, glucose galactose malabsorption.

Administration of drug Klaritin should be stopped in 48 hours prior to carrying out skin diagnostic allergoprob for prevention of false results.

Purpose of the tablets Klaritin during pregnancy is justified only if the potential advantage for the woman exceeds potential risk for a fruit. Drug gets into breast milk therefore it is necessary to make a choice between the termination of administration of drug or the termination of breastfeeding.

In the recommended doses Klaritin does not affect ability to run vehicles or difficult technical devices. However patients have to be notified on potential risk

in connection with development of symptoms of dizziness which can affect ability to run vehicles or difficult mechanisms.

Treatment: symptomatic and maintenance therapy during the necessary span. Gastric lavage, the crushed activated carbon with water. Loratadin is not brought by a hemodialysis. After rendering emergency aid the patient has to remain under medical observation.

On 10 tablets place in blister strip packaging from a film of polyvinylchloride and aluminum foil.

to Store at a temperature not higher than 25 wasps.

not to apply after an expiration date 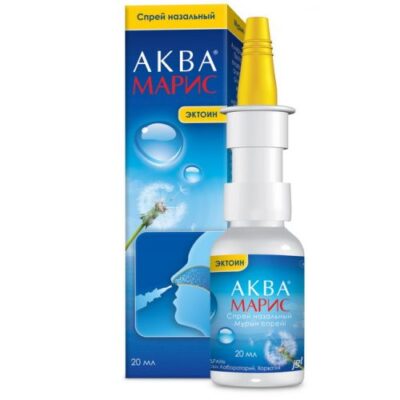 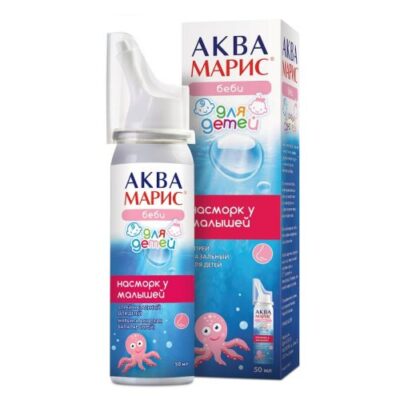