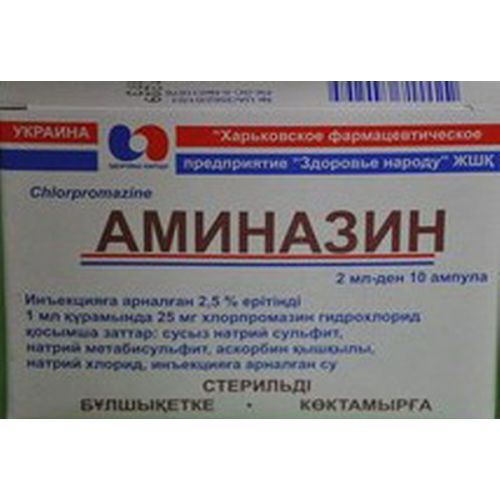 Pharmacokinetics Chlorpromazinum properties is found in blood in insignificant quantities in 15 min. after introduction of a therapeutic dose and circulates during 2 h. Possesses high linking with proteins of blood plasma (95-98%), it is widely distributed in an organism, gets through a blood-brain barrier, at the same time its concentration in a brain is higher, than in blood plasma. Elimination half-life of Chlorpromazin makes about 30 h. It is intensively metabolized in a liver with formation of a number of active and inactive metabolites. It is removed with urine, a stake, bile.
A pharmacodynamics
the Neuroleptic from group of derivatives of a fenotiazin. Renders the significant antipsychotic, sedative, antiemetic action. Weakens or completely eliminates nonsense and hallucinations, stops psychomotor excitement, reduces affective reactions, alarm, concern, lowers physical activity. The mechanism of antipsychotic action is connected with blockade of postsynaptic dopaminergic receptors in mesolimbic structures of a brain. Has also blocking effect on alpha adrenoceptors and suppresses release of hormones of a hypophysis and a hypothalamus. However, blockade of dopamine receptors increases secretion by prolactin hypophysis. Antiemetic action is caused by oppression or blockade dopamine D2 receptors in a hemoretseptorny trigger zone of a cerebellum, peripheral – blockade of vagus nerve in digestive tract. Sedative action is caused by blockade of the central adrenoceptors. Has moderate or weak effect on extrapyramidal structures.

Indications
– a chronic paranoid and hallucinatory paranoid state
– a condition of psychomotor excitement at patients with schizophrenia (hallucinatory and crazy, hebephrenic, catatonic syndromes)
– alcoholic psychosis
– maniacal excitement at patients with manic-depressive psychosis
– a mental disorder at patients with epilepsy
– the agitated depression at patients with presenile, maniacally depressive psychosis
– the neurotic diseases which are followed by increase in a muscle tone
– persistent pains, including, kauzalgiya (in combination with analgetics)
– a sleep disorder of resistant character (in combination with hypnotic drugs and tranquilizers)
– Menyer’s disease
– vomiting of pregnant women
– treatment and prevention of vomiting at treatment by antineoplastic means and radiation therapy
– a pruritic dermatosis
– as a part of ‘lytic mixes’ in anesthesiology.

Side effects
– an antipsychotic syndrome
– parkinsonism
– an akathisia
– indifference and other changes of mentality
– illegibility of sight
– arterial hypotension (especially at intravenous administration)
– tachycardia
– disturbance of a menstrual cycle
– impotence
– a gynecomastia
– increase in body weight
– skin rash
– an itching
– at prolonged use adjournment of Chlorpromazinum in front structures of an eye that can accelerate processes of normal aging of a crystalline lens
Seldom
– dystonic extrapyramidal reactions
– late dyskinesia
– thermal control disturbance
– a malignant antipsychotic syndrome
– cholestatic jaundice
– a leukopenia
– an agranulocytosis
– urination difficulty
– exfoliative dermatitis
– a multiformny erythema
– xanthopathy
– a photosensitization
– irritation of fabrics, at hit of solutions on mucous membranes, on skin and under skin
– quite often painful infiltrates after intramuscular introduction
Is very rare
– spasms
– the subsequent depression.

Medicinal interactions
In the neurotic diseases which are followed by increase in a muscle tone, persistent pains, including, kauzalgiya, Aminazine it is possible to combine with analgetics, in persistent insomnia – with hypnotic drugs and tranquilizers. At simultaneous use of Aminazine with anticonvulsant drugs the action of the last amplifies, with other drugs having the oppressing impact on the central nervous system and also with alcohol and alkogolsoderzhashchy drugs strengthening of a depression of the central nervous system and also respiratory depression, with tricyclic antidepressants, monoaminooxidase inhibitors – increase in risk of development of a malignant antipsychotic syndrome is possible, with drugs for treatment of a hyperthyroidism – risk of developing an agranulocytosis, with other drugs causing extrapyramidal reactions increases, – increase in frequency and weight of extrapyramidal disturbances, with the drugs causing arterial hypotension is possible, – the profound orthostatic hypotension is possible, with ephedrine – easing of vasoconstrictive effect of ephedrine is possible.
Barbiturates strengthen Aminazine metabolism, inducing microsomal enzymes of a liver and reducing that its concentration in blood plasma and, therefore, therapeutic effect.
Drug can suppress effect of amphetamines, a clonidine, guanetidin, adrenaline.
The concomitant use of Aminazine with a levodopa and salts of lithium is not recommended.

Special instructions
With extra care, under careful control, use drug at patients with pathological changes of a picture of blood, in gallstone and urolithic diseases, an acute pyelitis, rheumatism, a rheumatic carditis, alkogolny intoxication, a syndrome to Reja in the anamnesis (increase in risk of development of hepatotoxicity at children and teenagers) and also in a breast cancer, dekompensirovanny heart diseases, the expressed AG, the thrombembolia expressed to a myocardial dystrophy, predisposition ment of glaucoma, Parkinson’s disease, chronic diseases of respiratory organs (especially at children), epileptic seizures, diabetes.
It is necessary to apply with care at patients of advanced age (increase in risk of excessive sedative and hypotensive action), at the exhausted and weakened patients.
In case of a hyperthermia which is one of symptoms of a malignant antipsychotic syndrome, Aminazine should be cancelled immediately.
At children, especially with acute diseases, at use of drug the development of extrapyramidal symptoms is more probable.
At prolonged use of drug the control of a picture of blood, the index of a prothrombin, function of a liver and kidneys is necessary. After a drug injection the patients need to be during 1 – 1.5 h in a prone position.
During treatment not to allow alcohol intake.
Pregnancy and the period of a lactation
In need of use of Aminazine at pregnancy, it is necessary to limit treatment terms, and at the end of pregnancy, whenever possible to reduce a dose. It must be kept in mind that Aminazin prolongs childbirth.
At use of Aminazine in high doses at pregnancy, at newborns the digestion disturbances connected with atropinopodobny action, an extrapyramidal syndrome were in certain cases noted.
In need of use of drug in the period of a lactation, breastfeeding should be stopped. Aminazine and its metabolites get through a placental barrier, are emitted with breast milk.
Features of influence of medicine on ability to run the vehicle or potentially dangerous mechanisms
Should be applied with care at the patients who are engaged in potentially dangerous types of activity demanding the high speed of psychomotor reactions.

The overdose
is not revealed. For prevention of overdose it is necessary to adhere to strictly recommended drug doses.

A form of release and packing
On 2 ml in an ampoule, on 10 ampoules in a cardboard pack, together with the instruction for use.

Be the first to review “Chlorpromazine 2.5% / 2 ml 10s solution for injection in ampoules” Cancel reply