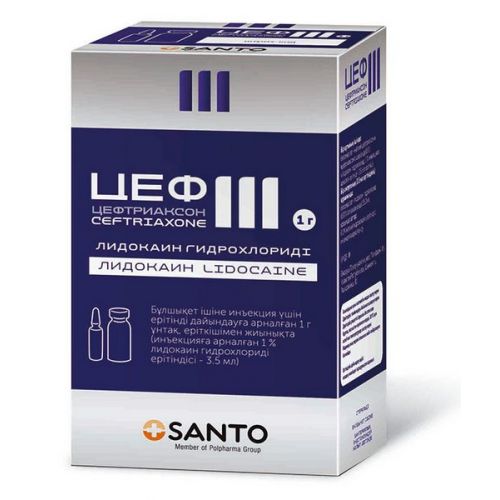 Cef III 1g of sol. 3.5 ml of a 1% solution of lidocaine 1’s powder for injection intravenously and intramuscularly

the Trade name
Tsef of III®

The description
Crystal powder from almost white till yellowish or yellowish-orange color, is slightly hygroscopic.

the Route of administration and doses
the Recommended doses
For adults and children are more senior than 12 years a standard therapeutic dose Tsef of III® makes 1 g once a day.
In heavy infections: 2-4 g once a day.
Duration of treatment depends on a course of the disease. Administration of drug should be continued the patient within at least 48-72 hours after normalization of temperature and confirmation of an eradikation of the activator.
For newborns (to two-week age) the dose makes 20-50 mg/kg/days.
For children from 15 days of life to 12 years the daily dose makes 20-50 mg/kg once a day. In heavy infections – up to 80 mg/kg/days.
Children with body weight have 50 kg and appoint doses for adults more.
Patients of advanced age
dose adjustment of drug at satisfactory function of kidneys and a liver is not required.
The renal and liver failure
with disturbance of renal function is not required From patients dose adjustment.
Only in case of a heavy renal failure (clearance of creatinine less than 10 ml/min.) the daily dose Tsef should not exceed III® 2 g.
Dose adjustment on condition of absence of renal failures is not required from patients with an abnormal liver function.
In the profound abnormal liver functions and kidneys and also at the patients who are on a hemodialysis it is necessary to watch concentration of a tseftriakson in blood plasma as the speed of its removal at these patients can decrease.
Gonorrhea
the Single dose makes 250 mg, once intramusculary.
Prevention of postoperative infections
Depending on degree of infectious risk, is entered by 1-2 g of a tseftriakson once in 30–90 min. prior to operation.
In colorectal surgery the simultaneous introduction Tsef is recommended to III® in a dose of 2 g intramusculary in combination with antianaerobic antibacterial drugs.
Meningitis
In bacterial meningitis at babies and children of younger age treatment begin with a dose 100 mg/kg (but no more than 4 g) once a day. After identification of the activator and determination of its sensitivity the dose can be reduced respectively.
Introduction
Solutions of drug have to be used at once after preparation.
For intramuscular introduction of 1 g of drug dissolve 1% of solution of lidocaine in 3.5 ml and enter deeply into a gluteus. It is recommended to enter no more than 1 g into the same muscle.
The solution containing lidocaine cannot be entered intravenously!
Solutions of the drug Tsef III® cannot be mixed or added to the solutions containing other antimicrobial drugs or solvents because of possible incompatibility.

Side effects
Often (≥ 1%, & lt, 10%)
– diarrhea, nausea, vomiting
Infrequently (≥ 0.1%, & lt, 1%)
– allergic skin reactions, such as spotty and papular rash,
a dieback, a small tortoiseshell, dermatitis, an itching, hypostasis
Seldom (≥ 0.01%, & lt, 0.1%)
– stomatitis, a glossitis (are usually mild and disappear after
the treatment termination)
– increase in creatinine in blood serum, an oliguria, a glucosuria,
a hamaturia
– mycoses of a genital tract
– the superinfections caused by mushrooms and other resistant microorganisms
– a headache, dizziness
– a neutropenia, a leukopenia, an eosinophilia, thrombocytopenia, anemia (including
hemolytic anemia), insignificant lengthening of a prothrombin
time
– fibrillation disturbance, an agranulocytosis (& lt, 500m3), in the main ambassador of 10 days of treatment at the general dose of 20 g and more
– anaphylactic reactions (bronchospasm), acute anaphylaxis
– increase in hepatic enzymes (ALT, nuclear heating plant, alkaline phosphatase) in
blood serum
– morbidity in the injection site, a fever, temperature increase
it is Very rare (& lt, 0.01%)
– positive test of Koombs, an agranulocytosis
– pseudomembranous colitis, pancreatitis
– a multiformny erythema, Stephens-Johnson’s syndrome, a Lyell’s disease,
a toxic epidermal necrolysis
– precipitation of calcic salt of a tseftriakson in a gall bladder
– formation of concrements in kidneys, mainly, at children is more senior than 3 years which were receiving or high daily doses of drug (more than 80 mkg/kg a day), or cumulative doses more than 10 g and also having accessory factors of risk (liquid consumption restriction, a bed rest, etc.). Formation of concrements in kidneys can lead to an anury and a renal failure. This undesirable phenomenon has reversible character and disappears after the therapy termination by drug.
Contraindications
– hypersensitivity to a tseftriakson, beta laktamnym to antibiotics,
penicillin or other components of drug
– hypersensitivity to solvent to lidocaine
– a hyperbilirubinemia at newborn and premature newborns
– premature newborns up to 41 weeks (week of pregnancy + weeks of life), the full-term newborns to 28-day age:
· with jaundice, a hypoalbuminemia and acidosis, as it diseases in which insufficiency of binding of bilirubin is probable
· which appoints or supposes intravenous treatment kaltsiysoderzhashchy solutions because of risk of formation of precipitated calcium superphosphates of calcic salts of a tseftriakson.

Overdose
Symptoms: nausea, vomiting, diarrhea.
Treatment: symptomatic. There is no specific antidote. The hemodialysis and peritoneal dialysis are inefficient.

A form of release and packing
On 1.0 g of active agent in bottles from a tube glass, hermetically corked by rubber bungs, pressed out by caps the aluminum or import combined caps of FLIPP OFF.
On each bottle paste the label from paper label or writing, or the label self-adhesive import production.
On 3.5 ml of solvent in ampoules with a capacity of 5 ml from neutral glass.
On 1 bottle of drug together with 1 ampoule of solvent place in a pack from cardboard with a partition from the same cardboard for a retail container or chrome ersatz.
Put the approved instructions for medical use in a pack in the state and Russian languages and the scarificator ampoule. When packing ampoules of lidocaine of a hydrochloride of 1% with notches, rings and points the scarificators do not invest.
It is allowed to apply the text of the approved instruction for medical use in the state and Russian languages on a pack.

A period of storage
3 years
After an expiration date not to use drug.

the Owner of the registration certificate
of JSC Khimfarm, the Republic of Kazakhstan

the Address of the organization accepting in the territory of the Republic of Kazakhstan claims from consumers on quality of products (goods)
of JSC Khimfarm,

to Develop the E-mail address of infomed@santo.kz

Be the first to review “Cef III 1g of sol. 3.5 ml of a 1% solution of lidocaine 1’s powder for injection intravenously and intramuscularly” Cancel reply