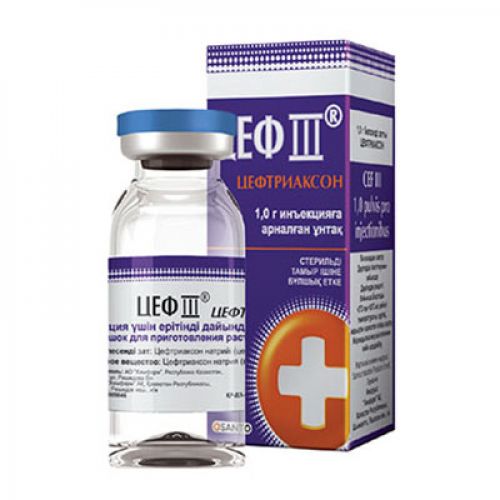 the Trade name
Tsef of III®

name Tseftriakson Lekarstvennaya a form
Powder for preparation of solution for injections of 250 mg, 500 mg and 1.0 g

the Description
Crystal powder from almost white till yellowish or yellowish orange color, is slightly hygroscopic.

Pharmacokinetics Pharmacokinetics properties of a tseftriakson has nonlinear character. All key pharmacokinetic parameters based on the general concentration of drug except for elimination half-life, depend on a dose.
Absorption
the Maximum concentration in blood plasma after single intramuscular introduction of 1 g of drug makes about 81 mg/l and is reached within 2-3 hours after introduction. The areas under a curve concentration in plasma – time after intravenous and intramuscular administration are identical. It means that the bioavailability of a tseftriakson after intramuscular introduction is 100%.
Distribution
the Volume of distribution of a tseftriakson equals 7-12 l. After introduction in a dose of 1-2 g tseftriakson well gets into fabrics and liquids of an organism. Within more than 24 hours of its concentration much more exceed the minimum overwhelming concentration for the majority of causative agents of infections (including in lungs, heart, bilious ways, a liver, tonsils, a middle ear and mucous a nose, bones and also spinal, pleural and synovial liquids and a secret of a prostate).
Tseftriakson quickly diffuses in interstitial liquid where maintains bactericidal action concerning microorganisms, sensitive to it, within 24 hours. Tseftriakson reversibly contacts albumine, and extent of binding decreases with concentration growth, decreasing, for example, from 95% at concentration in plasma less than 100 mg/l to 85% at concentration of 300 mg/l. Thanks to smaller concentration of albumine in an intercellular lymph, the share of a free tseftriakson in it is higher, than in plasma.
Penetration into separate
Tseftriakson fabrics gets through the inflamed meninx. In 24 hours after intravenous administration of a tseftriakson in doses of 50-100 mg/kg of body weight (to newborns and babies, respectively) concentration of a tseftriakson in cerebrospinal fluid exceed 1.4 mg/l. The maximum concentration in cerebrospinal fluid is reached approximately in 4 hours after intravenous administration and makes, on average, 18 mg/l. In bacterial meningitis the average concentration of a tseftriakson in cerebrospinal fluid makes 17% of concentration in plasma, in aseptic meningitis – 4%. At adult patients with meningitis in 2-24 hours, after introduction of a dose of 50 mg/kg of body weight, concentration of a tseftriakson in cerebrospinal fluid many times over exceed the minimum overwhelming concentration for the most widespread causative agents of meningitis.
Tseftriakson passes through a placental barrier and in small concentration gets to breast milk.
Metabolism
Tseftriakson is not exposed to system metabolism, and turns into inactive metabolites under the influence of indestinal flora.
Removal
the General plasma clearance of a tseftriakson makes 10-22 ml/min. The renal clearance equals 5-12 ml/min. of 50-60% of a tseftriakson 40-50% are removed in not changed view with urine, and – in not changed view with bile. Elimination half-life of a tseftriakson makes about 8 hours at adults.
The pharmacokinetics in special clinical cases
At newborn children through kidneys is removed about 70% of a dose. Babies in the first 8 days have lives and also at persons 75 years elimination half-life, on average, in two or three times more, than at adults of young age are more senior.
At patients with a renal failure or a liver the pharmacokinetics of a tseftriakson changes slightly, only small increase in elimination half-life is noted. If only function of kidneys is broken, removal with bile increases if only function of a liver is broken, removal through kidneys increases.
A pharmacodynamics
Tsef III® – a parenteral tsefalosporinovy antibiotic of the III generation with the prolonged action. The bactericidal activity of a tseftriakson is caused by suppression of synthesis of cellular membranes. Tsef III® possesses a broad spectrum of activity concerning gram-negative and gram-positive microorganisms. It vysokoustoychiv to the majority of b-laktamaz (as penicillinases, and tsefalosporinaz) developed by gram-positive and gram-negative bacteria. Tseftriakson is usually active concerning the following microorganisms:
Gram-positive aerobes
of Staphylococcus aureus (metitsillinochuvstvitelny), koagulazo-negative staphylococcus, Streptococcus pyogenes (b-hemolytic, groups A), Streptococcus agalactiae (b-hemolytic, groups B), b-gemoliticheskiye streptococci (groups And, C), Streptococcus viridans, Streptococcus pneumoniae.
Note. Metitsillinoustoychivye Staphylococcus spp. rezistentna to cephalosporins, including to a tseftriakson. As a rule, Enterococcus faecalis, Enterococcus faecium and Listeria monocytogenes are also steady.
Gram-negative aerobes
of Acinetobacter lwoffii, Acinetobacter anitratus (mainly, A. baumannii), Aeromonas hydrophila, Alcaligenes faecalis, Alcaligenes odorans, alkaligenopodobny bacteria, Borrelia burgdorferi, Capnocytophaga spp., Citrobacter diversus (including S. amalonaticus), Citrobacter freundii, Escherichia coli, Enterobacter aerogenes *, Enterobacter cloacae *, Enterobacter spp. (other), Haemophilus ducreyi, Haemophilus influenzae, Haemophilus parainfluenzae, Hafnia alvei, Klebsiella oxytoca, Klebsiella pneumoniae, Moraxella catarrhalis (which was earlier called by Branhamella catarrhalis), Moraxella osloensis, Moraxella spp. (other), Morganella morganii, Neisseria gonorrhoeae, Neisseria meningitidis, Pasteurella multocida, Plesiomonas shigelloides, Proteus mirabilis, Proteus penneri, Proteus vulgaris, Pseudomonas fluorescens, Pseudomonas spp. (other), Providencia rettgeri, Providencia spp. (other), Salmonella typhi, Salmonella spp. (netifoidny), Serratia marcescens, Serratia spp. (other) *, Shigella spp., Vibrio spp., Yersinia enterocolitica, Yersinia spp. Other.
Anaerobe bacterias
of Bacteroides spp. (zhelchechuvstvitelny), Clostridium spp. (except C. difficile), Fusobacterium nucleatum, Fusobacterium spp. (other), Gaffkya anaerobica (which was earlier called by Peptococcus), Peptostreptococcus spp.

Tsef III® enter the Route of administration and doses intramusculary and intravenously struyno or by drop infusion.
The recommended doses
For adults and children are more senior than 12 years an average daily dose Tsef of III® 1 times a day makes 1.0-2.0 g or to 0.5-1 g there are each 12 hours.
In hard cases or in cases of the infections caused by moderately sensitive pathogenic microorganisms, the daily dose can be increased up to 4 g.
For newborns (to two-week age) the dose makes 20-50 mg/kg/days.
For babies (from 15 days) and up to 12 years the daily dose makes 20-80 mg/kg.
Children with body weight have 50 kg and apply an adult dosage more.
For treatment of gonorrhea the dose makes 250 mg, once intramusculary.
Prevention of postoperative infections – depending on degree of infectious risk, is entered by 1-2 g Tsef III® once in 30–90 min. prior to operation.
In a renal failure (clearance of creatinine less than 10 ml/min.) the daily dose Tsef should not exceed III® 2.0 g.
In bacterial meningitis to newborns and children drug appoint in an initial dose 100 mg/kg of body weight once a day. The maximum daily dose – 4 g. After identification of the activator, the dose can be reduced.
To children with infections of skin and soft tissues – in a daily dose of 50-75 mg/kg of 1 times a day or to 25-37.5 mg/kg there are each 12 hours, no more than 2 g/days. In heavy infections of other localization – to 25-37.5 mg/kg there are each 12 hours, no more than 2 g/days.

In the profound abnormal liver functions and kidneys and also at the patients who are on a hemodialysis it is necessary to watch concentration of a tseftriakson in blood plasma since at them the speed of its discharge can decrease.
Rules of administration of drug
Solutions of drug have to be used at once after preparation. The prepared solutions keep the physical and chemical
stability within 6 hours at the room temperature (or within 24 hours at a temperature of 2-8 of 0C).
However use of solutions right after preparation has to be the general rule.
Intramuscular vvedeniyedlya intramuscular introduction of 1 g of drug it is necessary to dissolve 1% of solution of lidocaine in 3.5 ml.
It is recommended to enter no more than 1 g of drug into one buttock. The received solution cannot be entered intravenously!
Lidocaine is not used as solvent in pediatric practice.
Intravenous vvedeniyedlya the intravenous injection of 0.5 g of drug needs to part in 5 ml, and 1 g – in 10 ml of water for injections. Enter intravenously slowly within 2-4 minutes.
The intravenous infuziyaprodolzhitelnost of intravenous infusion makes, at least, 30 minutes. For intravenous infusion of 2 g of powder it is necessary to part approximately in 40 ml of the solution free from calcium, for example, in 0.9% sodium chloride solution, in 5% glucose solution, in 10% glucose solution.
The solution containing lidocaine cannot be entered intravenously!

of the Contraindication
– hypersensitivity to a tseftriakson and other cephalosporins, penicillin, karbapenema
– the profound renal failures
– the profound abnormal liver functions
– the coloenteritis connected with use of antibacterial drugs in the anamnesis
– a hyperbilirubinemia at newborns, premature children
– pregnancy, the period of a lactation (breastfeeding)

Medicinal interactions
Tsef III® has synergism with aminoglycosides, antibiotics concerning gram-negative flora.
At combined use with antiagregant, anticoagulants the likelihood of developing bleedings raises.
At simultaneous use with loopback diuretics (in high doses) the probability of nephrotoxic effect of drug increases.
Tsef solutions III® pharmaceutical are incompatible with the solutions containing other antibiotics and also with the solutions containing calcium ions.

Special instructions
In rare instances at treatment Tsef can be noted by III® at patients false positive results of test of Koombs. As well as other antibiotics, Tsef of III® can yield false positive result of test on a galactosemia. False positive results can be received also when determining glucose in urine therefore during therapy Tsef III® if necessary needs to determine a glucosuria only by a fermental method.
At elderly people and the weakened patients during use Tsef of III® can be required additional prescribing of vitamin K.
At simultaneous alcohol intake the development of disulfiramopodobny effects is possible (face reddening, a spastic abdominal pain and in a stomach, nausea, vomiting, a headache, hypotonia, tachycardia, short wind).
In a renal and liver failure
the dose adjustment and monitoring of concentration of drug in plasma is required From the patients who are on a hemodialysis.
In arterial hypertension and disturbance of water and electrolytic balance it is necessary to monitorirovat sodium level in plasma. In case of long-term treatment it is regularly necessary to control a pattern of peripheral blood, indicators of a functional condition of a liver and kidneys.

Overdose
Symptoms – strengthening of side effects is possible.
Treatment is symptomatic. The hemodialysis and peritoneal dialysis are inefficient.

The owner of the registration certificate
of JSC Khimfarm, the Republic of Kazakhstan, Shymkent

To develop the E-mail address of standart@santo.kz