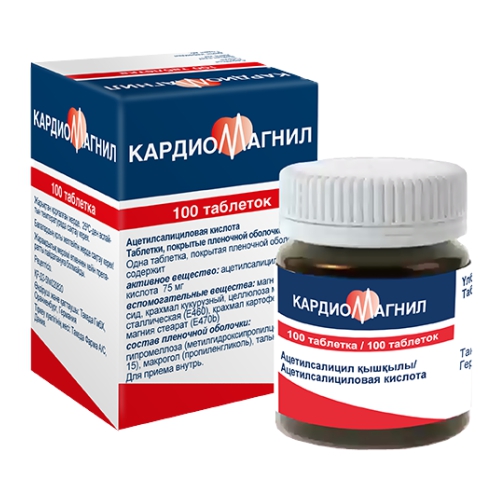 of the Tablet, film coated 75 mg

of the Tablet of white color in the form of the stylized heart, film coated (for a dosage of 75 mg)

Tablets of white color of an oval form, film coated with risky for a break (for a dosage of 150 mg)

Pharmacokinetics Absorption Acetylsalicylic Acid (ASK) properties is quickly soaked up from digestive tract. The bioavailability of ASK is about 70%, but this size is characterized by considerable individual variability because of presistemny hydrolysis in mucous membranes of a GIT and in a liver with education under the influence of esterases of salicylic acid. The bioavailability of salicylic acid is 80-100%.

Distribution
of 80% – 90% of ASK contacts proteins of plasma. Distribution volume at adults reaches 170 ml/kg of body weight. When concentration in blood plasma increases, there is a saturated linking with proteins that leads to increase in volume of distribution. Salicylates widely communicate proteins of plasma and are quickly distributed in an organism. Also salicylates are found in breast milk and can get through a placental barrier.

Metabolism
of ASK is hydrolyzed in an active metabolite of salicylate in an intestines wall. After absorption, ASK quickly turns into salicylic acid, but the first 20 minutes after intake ASK is a prepotent form.
Removal
Salicylate mainly is eliminated by means of hepatic metabolism. Therefore concentration of salicylate in plasma increases disproportionately together with a dose. At a dose of ASK of 325 mg a half-life period in plasma for salicylate 2-3 hours. At high doses of ASK, the half-life period increases till 15-30 o’clock. Salicylate is also removed with urine in not changed look. The removed quantity depends on a dose and from rn urine. About 30% of a dose are removed with alkalinuria and 2% with aciduria.

of ASK is analgetic, anti-inflammatory and febrifuge which also prevents aggregation of thrombocytes. It increases a bleeding time.

The pharmacological effect of ASK consists in inhibition of products of prostaglandins and thromboxanes.

The anti-inflammatory effect is connected with perfusion of blood and caused by E2 prostaglandin synthesis inhibition.

ASK is irreversible acetylates and G/H-prostaglandin synthase inhibits enzyme and therefore impact on thrombocytes is longer, than presence of ASK at an organism. The effect of ASK on biosynthesis of thromboxane in thrombocytes and for a bleeding time remains during many days even after treatment stopped. The effect ceases to work only when in plasma new thrombocytes are found.

Besides, salicylate (active metabolite), possesses anti-inflammatory action, effect of influence on breath, on acid-base balance and on a stomach. Salicylates stimulate breath mainly by direct impact on a medulla. They make indirect impact on a mucous membrane of a stomach owing to their inhibition of vasodilating and cytoprotective prostaglandins and, besides cause predisposition to ulcers.

– primary prevention of cardiovascular diseases, such as thrombosis and sharp coronary syndrome at people are more senior than 50 years with one or more of the following signs which can be risk factors of developing cardiovascular diseases: a hypertension, a hypercholesterolemia, diabetes, obesity (ИМТ&gt, 30) and the family anamnesis of a myocardial infarction aged to 55, at least at one of parents, the brother or the sister

– prevention of a repeated myocardial infarction and thrombosis of blood vessels

At intake of a tablet can be chewed or suspenzirovat in water for ensuring fast absorption.

of 150 mg as initial dose, and then 75 mg daily.
An acute heart attack of a myocardium / unstable stenocardia

of 150 – 450 mg as soon as possible after emergence of the first symptoms.

Patients are more senior than 50 years

It is very frequent:

– inhibition of aggregation of thrombocytes

– bronkhospastichesky effect at patients with asthma

– increase in values of transaminases and alkaline phosphatase

– gastrointestinal bleedings of heavy degree in an upper part of digestive tract, perforation

– a prothrombinopenia (at high doses), thrombocytopenia, a neutropenia, an eosinophilia, an agranulocytosis, aplastic anemia

– stomatitis, an esophagitis, formation of ulcers in the lower part of digestive tract, a stenosis, colitis, exacerbations of inflammatory bowel diseases

– the dose-dependent reversible toxic hepatitis connected with various viral diseases (flu A and B, chicken pox).

– the known or suspected hypersensitivity to salicylates, to non-steroidal anti-inflammatory drugs (NPVP) or to any of excipients

– a peptic ulcer in an active stage

– children aged up to 16 years

Should avoid simultaneous use of the following following drugs:

Possible mechanism: the reduced clearance of a methotrexate.

Possible mechanism: the increased concentration of acetazoleamide can

lead to diffusion of salicylates from blood plasma in okruzhashchy fabrics.

acidosis) and the toxicity caused by salicylates (vomiting, tachycardia,

a hyperpnea, confusion of consciousness).

Simultaneous use of the following drugs

Possible mechanism: reduce products of thrombin that leads to indirect decrease of the activity of thrombocytes (antagonist of vitamin K).
Effect: the increased risk of bleeding.

Heparin
Possible mechanism: reduces products of thrombin that leads to indirect decrease of the activity of thrombocytes.

Effect: the increased risk of bleeding.

If two or more of the above-stated means are applied together with ASK, it can result in synergistic effect with increase in inhibition of activity of thrombocytes and as a result the risk of hemorrhagic diathesis increases.
NPVP and TsOG-2 inhibitors (tselekoksib)

Possible mechanism: additive gastrointestinal irritation.
Effect: increase in risk of gastrointestinal bleeding.
The ibuprofen
At the same time use of an ibuprofen inhibits the irreversible aggregation of thrombocytes caused by ASK. Treatment by an ibuprofen at patients with the increased risk of cardiovascular diseases can limit cardiotyre-tread action of ASK.

The patients accepting ASK once a day for prevention of cardiovascular diseases and those who accept an ibuprofen from time to time have to accept ASK, at least, in 2 hours prior to reception of an ibuprofen.

The combination can demand correction of a dose of Valproatum.
Corticosteroids
Possible mechanism: additive irritation of digestive tract and increase in renal clearance or metabolism of salicylates.
Effect: increase in risk of gastrointestinal ulcers and subtherapeutic concentration of salicylate in plasma.

Effect: decrease in effect of ASK.

Mechanism: it is unknown.

Effect: the increased risk of development of a syndrome to Reja.

Possible mechanism: gingko the biloba interferes with aggregation of thrombocytes.
Effect: the increased risk of bleeding.

It is necessary to avoid long use of Cardiomagnyl in combination with other NPVP in connection with the increased risk of development of undesirable effects (see the section Medicinal interactions).

Magnesium the hydroxide which is a part of drug is an antacid which neutralizes hydrochloric acid, has the enveloping property, connects the lysolecithin and bile acids making an adverse effect on mucous a stomach.

It is necessary to avoid prolonged use at elderly patients in pain, inflammation, fever and a rheumatic disease because of risk of gastrointestinal bleeding. It is necessary to apply with care low doses of ASK at patients of advanced age to treatment of acute or chronic coronary heart disease and a stroke and also to prevention of a stroke and coronary heart disease in connection with risk of gastrointestinal bleeding.

ASK can cause a bronchospasm and cause attacks of asthma or other allergic reactions.

Drug should be used with care at the following states:

– existence in the anamnesis ulcer damage of a GIT, including a chronic and recurrent peptic ulcer or gastrointestinal bleedings

– at patients with renal failures or blood circulations

– in an abnormal liver function

– at patients of ASK suffering from a severe form of insufficiency of the glucose 6 dehydrogenase phosphate (G6DP) can induce development of hemolysis or hemolytic anemia.

ASK can bring to the increased bleeding in time and after surgical interventions, for example extractions of teeth.

The fertility
Use of ASK can reduce fertility, in communication with what it should not be used at the women wishing to become pregnant. If treatment of ASK is necessary, treatment has to be the shortest and the dose has to be lower. Impact on fertility is reversible.

Clinical trials show that dosages up to 100 mg/days are safe for use in obstetrics demanding special observation.

the First and second trimester: Inhibitors of synthesis of prostaglandins can be applied, only if there are strict indications, and the dose has to be as it is possible low, and the term of treatment by shorter.

The third trimester: purpose of ASK over a dose of 100 mg a day can be caused in a fruit:

– renal dysfunction with consecutive development of a renal failure and reduction of amniotic liquid,

at mother and a fruit at the end of pregnancy:

– increase in a bleeding time, as a result of the possible lowered aggregation of thrombocytes

– suppression of sokratitelny uterine activity that can lead to late childbirth or increase in a duration of delivery.

Due to the above use of ASK over a dose more than 100 mg a day are contraindicated in the III trimester at pregnant women.

Due to the lack of experience of use during a lactation, before purpose of ASK during breastfeeding it is necessary to estimate potential advantage of therapy by drug of rather potential risk for children of chest age.

Features of influence of medicine on ability to run the vehicle or potentially dangerous mechanisms
Cardiomagnyl does not influence or affects slightly ability to driving or work with moving mechanisms.

the Dangerous dose for adults: 300 mg/kg.

Symptoms: as a rule, chronic poisoning with salicylates of easy degree occurs only after long reception of high doses and is shown: fever, tachypnea, sonitus, respiratory alkalosis, metabolic acidosis, slackness, moderate dehydration, nausea and vomiting.
Intoxication, as a rule, happens heavier at patients to chronic overdose or at those who abuse medicines and also at patients of advanced age or at children.

Treatment: gastric lavage if there is a suspicion that more than 120 mg/kg were accepted, intake of activated carbon is necessary. Serumal salicylate has to be measured, at least, each 2 hours after reception and until the level of salicylate does not begin to decrease constantly, and the acid-base balance will not improve.

If there is a suspicion of bleeding it is necessary to control a prothrombin time and/or the international normalized relation (INR).
The water and electrolytic balance shall be restored. The alkaline diuresis and a hemodialysis are effective ways of removal of salicylates from plasma. The hemodialysis has to be considered in case of heavy intoxication as it quickly increases clearance of salicylate and restores acid-base and water-salt balance.

On 30 or 100 tablets in the glass bottles of brown color corked by the screw-on cover of white color (from polyethylene) with the built-in removable capsule with the silica gel and a ring providing control of the first opening. The bottle together with the instruction for use in the state and Russian languages is put in a pack from cardboard.

To Store storage conditions in the place protected from light, at a temperature not above 25C.

not to use drug after expiry date

the Name and the country of the owner of the registration certificate Takeda of Pharm of A/S, Denmark