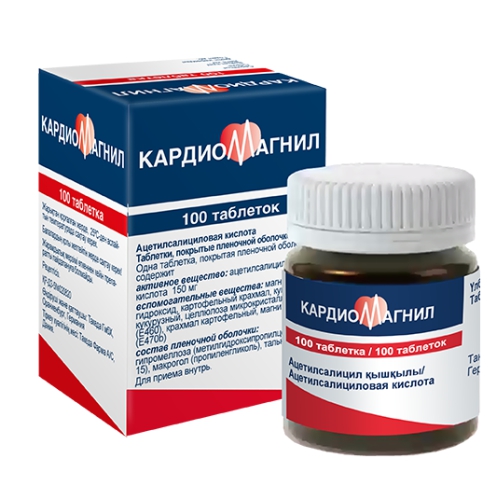 Acetylsalicylic acid (ASA) is rapidly absorbed from the gastrointestinal tract. The bioavailability of ASA is about 70%, but this value is characterized by significant individual variability due to presystemic hydrolysis in the mucous membranes of the gastrointestinal tract and in the liver with the formation of salicylic acid under the action of esterases. The bioavailability of salicylic acid is 80-100%.
After oral administration, non-ionized ASA is absorbed in the stomach and intestines. Absorption decreases with food intake and in patients suffering from migraine attacks. The rate of absorption is increased in patients suffering from achlorhydria or in patients taking polysorbates or antacids. The peak serum concentration of ASA is reached within half an hour, and for salicylic acid within 1-2 hours.

80% – 90% of ASA binds to plasma proteins. The volume of distribution in adults reaches 170 ml/kg of body weight. When plasma concentrations increase, saturated protein binding occurs, leading to an increase in the volume of distribution. Salicylates are extensively bound to plasma proteins and rapidly distributed throughout the body. Salicylates are also found in breast milk and can cross the placental barrier.

ASA is hydrolyzed to the active metabolite salicylate in the intestinal wall. After absorption, ASA is rapidly converted to salicylic acid, but in the first 20 minutes after ingestion, ASA is the dominant form.
breeding

Salicylate is mainly eliminated through hepatic metabolism. Therefore, plasma salicylate concentrations increase disproportionately with dose. At a dose of ASA 325 mg, the plasma half-life for salicylate is 2-3 hours. At high doses of ASA, the half-life increases to 15-30 hours. Salicylate is also excreted in the urine unchanged. The excreted amount depends on the dose and on the pH of the urine. Approximately 30% of the dose is excreted in alkaline urine and 2% in acidic urine.

ASA is an analgesic, anti-inflammatory and antipyretic agent that also prevents platelet aggregation. This increases bleeding time.
The pharmacological effect of ASA is to inhibit the production of prostaglandins and thromboxanes.
The analgesic effect is a peripheral effect caused by inhibition of the cyclooxygenase enzyme.
The anti-inflammatory effect is associated with blood perfusion and is due to inhibition of the synthesis of prostaglandin E2.
ASA irreversibly acetylates and inhibits the enzyme prostaglandin G / H synthase and therefore the effect on platelets is longer than the very presence of ASA in the body. The effect of ASA on thromboxane biosynthesis in platelets and on bleeding time persists for many days even after treatment has been discontinued. The effect ceases only when new platelets are found in the plasma.
In addition, salicylate (an active metabolite) has an anti-inflammatory effect, an effect on respiration, on acid-base balance and on the stomach. Salicylates stimulate respiration mainly by direct action on the medulla oblongata. They have an indirect effect on the gastric mucosa due to their inhibition of vasodilating and cytoprotective prostaglandins and furthermore cause a predisposition to ulcers.

Tablets 75 mg
– Acute and chronic ischemic heart disease
– Primary prevention of cardiovascular diseases such as thrombosis and acute coronary syndrome in people over 50 years of age with one or more of the following signs that may be risk factors for cardiovascular disease diseases: hypertension, hypercholesterolemia, diabetes mellitus, obesity (BMI> 30) and a family history of myocardial infarction before the age of 55, at least one parent, brother or sister
– prevention of recurrent myocardial infarction and blood vessel thrombosis

Tablets 150 mg
150 mg daily
Dosage adjustment may be necessary if liver or kidney function is impaired. The drug is not prescribed for severe violations of the liver or kidneys.

Long-term use of Cardiomagnyl in combination with other NSAIDs should be avoided due to an increased risk of adverse effects (see section Drug Interactions).
Magnesium hydroxide, which is part of the drug, is an antacid that neutralizes hydrochloric acid, has an enveloping property, binds lysolecithin and bile acids, which have an adverse effect on the gastric mucosa.
Long-term use should be avoided in elderly patients with pain, inflammation, fever and rheumatic disease due to the risk of gastrointestinal bleeding. Low doses of ASA should be used with caution in elderly patients for the treatment of acute or chronic ischemic heart disease and stroke, as well as for the prevention of stroke and coronary heart disease due to the risk of gastrointestinal bleeding.
ASA can cause bronchospasm and cause asthma attacks or other allergic reactions.
The drug should be used with caution in the following conditions:
– a history of ulcerative lesions of the gastrointestinal tract, including chronic and recurrent peptic ulcer or gastrointestinal bleeding
– in patients with impaired renal or circulatory function
– in case of impaired liver function
– in patients suffering from severe deficiency of glucose 6 phosphate dehydrogenase (G6PD), ASA can induce the development of hemolysis or hemolytic anemia.
ASA can lead to increased bleeding during and after surgical interventions such as tooth extractions.
Fertility
The use of ASA may reduce fertility and should therefore not be used in women who wish to become pregnant. If ASA treatment is necessary, treatment should be as short as possible and the dose should be as low as possible. The effect on fertility is reversible.
Pregnancy and lactation
Low doses (up to 100 mg/day)
Clinical studies show that dosages up to 100 mg/day are safe for use in obstetrics requiring special supervision.
High doses (more than 100 mg/day)
First and second trimester: Prostaglandin synthesis inhibitors should only be used if there is a strong indication and the dose should be as low as possible and the duration of treatment as short as possible.
Third trimester: administration of ASA over a dose of 100 mg per day can cause in the fetus:
– cardiopulmonary toxicity (with premature closure of the Batal duct and pulmonary hypertension)
– renal dysfunction with the subsequent development of renal failure and a decrease in amniotic fluid;
in mother and fetus at the end of pregnancy:
– an increase in bleeding time, as a result of a possible reduced platelet aggregation
– suppression of the contractile activity of the uterus, which can lead to late labor or an increase in the duration of labor.
In connection with the above, the use of ASA in excess of a dose of more than 100 mg per day is contraindicated in the III trimester in pregnant women.
Due to the lack of experience with use during lactation, before prescribing ASA during breastfeeding, the potential benefit of drug therapy should be assessed against the potential risk to infants.
Features of the influence of the drug on the ability to drive a vehicle or potentially dangerous mechanisms
Cardiomagnyl does not affect or slightly affects the ability to drive a vehicle or work with moving mechanisms.

Dangerous dose for adults: 300 mg/kg.
Symptoms: As a rule, chronic mild salicylate poisoning occurs only after long-term use of high doses and is manifested by: fever, tachypnea, tinnitus, respiratory alkalosis, metabolic acidosis, lethargy, mild dehydration, nausea and vomiting.
Intoxication tends to be more severe in patients with chronic overdose or those who abuse drugs, as well as in elderly patients or in children.
Treatment: gastric lavage, if more than 120 mg/kg is suspected, activated charcoal should be taken. Serum salicylate should be measured at least every 2 hours after ingestion and until salicylate levels begin to decline steadily and acid-base balance improves.
If bleeding is suspected, prothrombin time and/or international normalized ratio (INR) should be monitored.
The water-electrolyte balance must be restored. Alkaline diuresis and hemodialysis are effective ways to remove salicylates from plasma. Hemodialysis should be considered in cases of severe intoxication, as it rapidly increases clearance of salicylate and restores acid-base and water-salt balance.

Release form and packaging
30 or 100 tablets in brown glass bottles, sealed with a white screw cap (made of polyethylene) with a built-in removable capsule with silica gel and a ring that provides control of the first opening. The bottle, together with instructions for use in the state and Russian languages, is put into a pack of cardboard.

Store in a place protected from light, at a temperature not exceeding 25˚С.

4.00 average based on 1 ratings.
Add a review Cancel reply