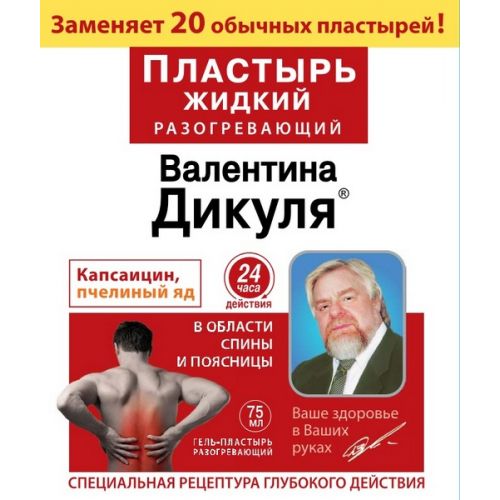 The INSTRUCTION FOR USE Muscular pains are rather widespread and frequent phenomenon in life. Usually pains in muscles of a back arise owing to long temporary stay in one, often inconvenient, a pose. In certain cases the overstrain of separate groups of muscles can lead to undesirable changes in them. In certain cases there is a big risk of transition of a problem to a chronic form. It is the traditional professional trouble accompanying drivers, office employees, health workers and many other professions. These people can ask most less often for medical care about it. The overstrain of muscles of a back can arise also suddenly in cases when insufficiently warmed muscles are exposed to considerable physical activities. Among other troubles there are problems with a back and a waist, especially during the autumn and winter period, hold a specific place. Both the inactive lifestyle, and physical overworks against the background of local overcoolings, stresses and disbolism are their basic reasons. Owing to a muscular spasm the rapprochement of intervertebral disks and narrowing of the articulate purposes (reduction of volume of an articulate cartilage) occurs. Salt outgrowths at the edges of vertebrae (osteophytes) squeeze the nervous roots going an otspinny brain, causing an acute pain. The raising of weights, the awkward movement and also cold and infections can become a push to aggravation. What should I do? First of all, it is necessary to eliminate a muscular spasm, to restore the broken local blood circulation and to remove swelled, then it is necessary to take measures to strengthening of a muscular corset, to activate cellular metabolism and removal of salt deposits, to increase the level of local links of immunity. The gel plaster warming Valentin Dikul with capsaicin and apitoxin – effective means for topical administration in a back and a waist, developed by the academician Valentin Ivanovich Dikul, the specialist in musculoskeletal system diseases, in numerous requests of patients. Action of natural components gel plaster is directed to activization of blood circulation and metabolism in problem area, relaxation of muscles and stimulation of local immunity. Ingredients: water, isopropyl alcohol, polyvinyl alcohol, glycerin, PEG-400, capsaicin, vanillilbutilovy ether, metilnikotinat, poison bee raw, DMDM hydantoin. Properties and efficiency gel plaster of the warming Valentin Dikul with capsaicin and apitoxin are caused by synergism of action of the components entering it. Apitoxin – a product of secretory activity of poisonous glands of honey bees, highly effective natural means. Has soothing and anti-inflammatory properties, stimulates a local blood stream, has the warming and resorptional effect. Capsaicin, extract of pepper of red (Capsicum) possesses the strong warming, distracting and resorptional action, activates exchange processes in muscle tissue, improves microcirculation in circumarticular fabrics and food of facet (intervertebral) joints. Reduces puffiness, removes a muscular spasm, blocks action of the chemical mediators provoking inflammation and transferring painful impulses in central nervous system, tormozitbolevy sensitivity. Is a conductor for other medical components. Megipnikotinat-kombinirovanny drug for external use – derivative RE vitamin Renders the local irritating, vasodilating and secondary analgetic action, a powerful muscular relaxant. Provides deep penetration of other components. Irreplaceable cure for sciatica with a pain syndrome, a lumbago, arthralgias and myalgias. Advantages of a liquid plaster of Valentin Dikul: – convenience of use (transparent, elastic, thin, nervuinayasya, the flavourless quick-drying film resistant to attrition imperceptible even under thin underwear), – fast effect and long action (the deep warming-up effect occurs in two minutes after drawing and deystvuyetdo 24 hours), – a possibility of the choice by the consumer of the size and a form of a plaster proceeding from a specific situation, – 100% of a guarantee of fixing on a body to the end of a procedure. Does not prevent to be engaged in daily affairs and sport, – unlike usual plasters not was it is revealed allergic reactions (temporary reddening after the procedure is normal), – the benefit – one tube of a liquid plaster is enough for production of at least twenty plasters of standard size 9khi2sm. Attention! To provoke sudden problems with a back and a waist the physical overstrain, sharp turn of a trunk, overcooling, intoksika-the tion including caused by alcohol and nicotine, an infection (flu, a SARS) and also impact of drafts, low temperatures, the increased humidity can. Route of administration: to apply gel film, without rubbing, a thin layer on problem area. To leave before full drying. After drawing carefully to wash up hands! To avoid hit on a slizistta, in case of hit in eyes immediately to wash out a large amount of water. After the end of use it is accurate to remove the formed film or to wash away it warm water. Only for external use. Contraindications: individual intolerance of components. Side effects are not revealed. In case of allergic reactions to stop use and to consult with the doctor. Made: 000’KorolyovPharm’, the 141074, Russian Federation, Moscow Region, from Queens, Pionerskaya St., 4 by request of 000 NPO ForaPharm, 129626, Russian Federation, Moscow, Kulakov Lane, 9, building 1 phone for consumers: (495)686-08.42 Corresponds to TP 7C 009/2011 Packaging: tuba of 75 ml. Storage conditions: to store at a temperature from + 5 up to +25 °C. Expiration date: 24 months. Date of production is specified on a tuba seam. The stated effect is confirmed with clinical trials. Is not medicine. The organization accepting claims (offer) in RK: Representative office of CJSC Exportpharm in the Republic of Kazakhstan: 110000, about Kostanay, Baymagambetov Street, 166a, ph. (7142) 54-08-42