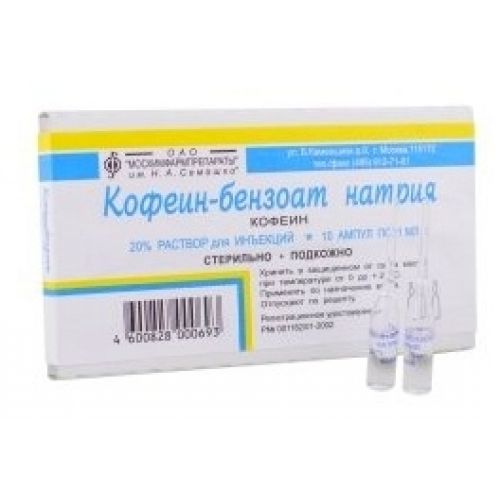 Solution for injections of 20%

The semi-elimination period (T&frac12) caffeine is 2.5-4.5 h, at newborns in connection with low enzymatic activity of microsomal enzymes the elimination of caffeine is slowed down, T&frac12, makes 80 & plusmn, 23 h, at the age of 3-5 months it decreases up to 14.4 h and in 5-6 months becomes to equal indicators of the adult. The general clearance of caffeine at the adult is 155 ml/kg/h, at the newborn child it is equal to 31 ml/kg/h.

Caffeine mainly with urine in the form of metabolites is emitted. 10% of the entered dose are allocated in not changed look.

Has psychogogic and analeptical properties.

The mechanism of action is connected with ability of caffeine to act as the competitive antagonist of purine A1 and A2A-receptors. As a result of blockade of receptors, processes of braking in central nervous system decrease, secretion of neurotransmitters (serotonin, noradrenaline and dopamine) in motor zones of a cerebral cortex, a hypothalamus and a medulla is facilitated and stabilized. In doses of relatives to toxic caffeine is capable to block activity of phosphodiesterases (mainly III, IV types) and to slow down disintegration of tsAMF and tsGMF that stimulates activity of neurons and accelerates a metabolism in a cell.

Caffeine has direct exciting impact on central nervous system: stimulates mental activity, increases intellectual and physical effeciency, shortens reaction time, activates positive conditioned reflexes. After administration of caffeine the cheerfulness appears, the exhaustion and drowsiness temporarily decrease or eliminated. At elderly people the influence on a dream is more significant: approach of a dream slows down, the general time of a dream decreases and the frequency of night awakenings increases.

Against the background of oppression of a respiratory center causes increase and deepening of breath. Influences a cardiovascular system: increases the frequency and force of warm reductions, in hypotension raises the ABP (does not influence the AD normal level). At premature children eliminates periodic breathing due to decrease in partial pressure of carbon dioxide in blood, increases ventilation volume, without influencing significantly function of a cardiovascular system.

Relaxes smooth muscles of bronchial tubes, bilious ways, causes dilatation of vessels of skeletal muscles, heart and kidneys, narrows vessels of abdominal organs (especially at their initial dilatation). Has weak diuretic effect due to expansion of renal vessels and braking of a reabsorption of electrolytes in renal tubules.

Reduces aggregation of thrombocytes. Stimulates secretion of glands of a stomach. Increases standard metabolism, strengthens a glycogenolysis, causing a hyperglycemia.

– the states connected with oppression of the central nervous system functions, respiratory and cardiovascular systems: poisonings with drugs, serious infectious diseases, states after use of the general anesthetics (anesthesia)

Intramuscular administration of solution of caffeine Natrium benzoicum is not recommended in connection with a possibility of development of painful spastic reduction of muscles in the place of an injection.

– at sudden phase-out is possible development reactive exhaustions, drowsiness and a depression.

– arterial hypertension of the III degree

– organic diseases of a cardiovascular system (including atherosclerosis)

At simultaneous use caffeine strengthens action of antiagregantny means.

Reduces effect of the sleeping, narcotic and other medicines oppressing central nervous system.

At simultaneous use increases bioavailability of acetylsalicylic acid, paracetamol and ergotamine enhancing that their effect.

At simultaneous use from b2-adrenomimetika in high doses (salmeterol, salbutamol, Fenoterolum) risk of development of a hypopotassemia increases.

At simultaneous use with drugs of methylxanthines (theophylline, Aminophyllinum) the increase in concentration of theophylline in blood plasma and increase of risk of its toxic action is observed.

When using caffeine-sodium benzoate at the smoking persons of its concentration in blood plasma below, than at non-smoking patients.

instructions Pregnancy and a lactation

As adequate and well controlled researches at women during pregnancy were not conducted and also considering slow elimination of caffeine from a fruit organism the use it during pregnancy is possible only after ratio assessment advantage/risk for mother and a fruit. Caffeine and its metabolites are excreted in mother’s milk in insignificant quantities. In need of its use in the period of a lactation it is necessary to estimate a ratio advantage/risk for mother and the child.

Use in a neonatology

Kofein can be applied in the period of a neonatality and also at premature children. At the same time it is necessary to monitorirovat concentration of caffeine in plasma and to support her within therapeutic borders (3-10 mkg/ml).

Use for persons in the anamnesis

Is required to be careful with a peptic ulcer of a stomach and duodenum when prescribing caffeine to these groups of patients, in connection with the increased risk of aggravation at them a peptic ulcer.

Influence on ability to performance of work, connected with need of concentration of attention

Symptoms of intoxication arise at the use of caffeine in a dose more than 300 mg/days (though use cases more than 1000 mg/days of caffeine are described). Emergence of alarm, concern, a tremor, a headache, confusion of consciousness, a tachyarrhythmia is possible. At newborn children at concentration in blood more than 50 mkg/ml of caffeine perhaps except the above picture pathological strengthening of reflexes, emergence of a convulsive syndrome.

Specific antidote does not exist. Measures of the help include the drug withdrawal supporting and the symptomatic therapy directed to elimination of the arisen disturbances, control of level of arterial blood pressure and stopping of a convulsive syndrome by administration of tranquilizers of a benzodiazepine row (diazepam).

of the Ampoule on 1 ml. On 10 ampoules with a knife for opening of ampoules in a box of cardboard.

In the place protected from light, at

Not to use an expiration date of 5 years after expiry date.