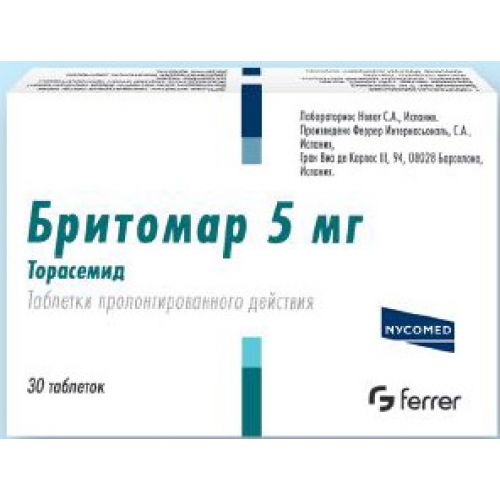 The description
Round biconvex tablets of white or almost white color with an engraving of SN on one party of a tablet.

Pharmacokinetics Prolonged properties the form of a torasemid provides gradual release of active agent, reducing fluctuations of concentration of drug in blood, in comparison with a usual form of a torasemid of immediate release.
Absorption
the Relative bioavailability of the prolonged form in comparison with usual is about 102% after reception of several doses of drug. Active agent is soaked up with limited effect of the first passing through a liver, its maximum concentration (Cmax) in plasma is reached during 1.5 h after intake. The concomitant use with food lowers Cmax by 21% and the general bioavailability for 11%. However, despite this decrease, influence of food on amount of the absorbed drug is considered insignificant. A renal or liver failure do not affect absorbability of drug.
Distribution
More than 99% of a torasemid contacts proteins of plasma. The volume of distribution of a torasemid from 12 to 15 liters at healthy individuals and at patients with a slight and moderate renal failure or stagnant heart failure. At patients with cirrhosis the distribution volume practically doubles.
Metabolism
the Main metabolite – derivative carboxylic acid, is biologically inactive substance. Two other metabolites which in a human body are formed in insignificant quantity have some diuretic activity, but their concentration are too small to have any significant clinical effect.
Removal
Elimination half-life (T1/2) of a torasemid at healthy people makes 4 hours. Torasemid leaves from blood circulation, being exposed to metabolism in a liver (about 80% of total), and is brought with urine (patients have about 20% of total with normal function of kidneys).
Considering the fact that more than 99% of a torasemid contact proteins of plasma, the amount of substance of the nephron getting into tubules by means of glomerular filtration is very small. The renal clearance of a torasemid is carried out, mostly, due to active secretion of connection in proximal tubules.
At patients with dekompensirovanny stagnant heart failure the hepatic and renal clearance of drug is reduced, it is probable at the expense of developments of stagnation in a liver and decrease in a renal blood-groove, respectively. At such patients, the general clearance of a torasemid is 50% less, than at healthy individuals, and elimination half-life and the area under a curve concentration time (AUC) are respectively higher. Because of reduced renal clearance, the smaller amount of the drug which got to a blood stream reaches the place of the action in a tubule gleam therefore, for this dose of drug, the natriuresis at patients with stagnant heart failure is lower, than at healthy individuals.
At patients with a renal failure, the renal clearance of a torasemid is considerably reduced, but it not strongly affects the general clearance of drug. The smaller amount of the drug which got to a blood stream reaches the place of the action in a tubule gleam therefore the natriuretic effect of diuretic is reduced. The diuretic effect in a renal failure nevertheless can be reached by purpose of high doses of drug. The general clearance of a torasemid and the period of its semi-removal remain normal in case of reduced function of kidneys, due to metabolism of substance in a liver.
Patients with cirrhosis have a distribution volume, elimination half-life and renal clearance of drug are raised, but the general clearance, still remains invariable.
The pharmacokinetic profile of a torasemid at elderly patients is similar to that at young people, behind that exception that decrease in renal clearance of drug because of characteristic decrease in renal function at elderly patients takes place. At the same time the general clearance and elimination half-life remain invariable.
The pharmacodynamics
the action Mechanism
Torasemid is loopback diuretic. Torasemid acts on an internal surface of a thick segment of the ascending Henle’s loop knee where he inhibits the transport system of Na+/K+/2Cl-.
Drug strengthens excretion of sodium, chlorine and water, without having noticeable impact on glomerular filtration rate, a renal blood stream or acid-base balance.
Clinical effects
Britomar is released is prolonged, thanks to it the diuresis begins approximately in an hour after administration of drug, reaching a maximum in 3-6 hours, the effect from 8 to 10 hours lasts. At the healthy people accepting a single dose of the drug Britomar, dependence of the answer on a dose in relation to sodium excretion, was linear at a dosage from 2.5 to 20 mg. Increase in excretion of potassium is negligible at a dose to 10 mg and slightly increases up to 5-10 milligram-equivalents (mg-ekv) at a dosage in 20 mg.
At patients with arterial hypertension Britomar snizht arterial blood pressure, at use in a dose of 5-10 mg once a day. After 4-6 weeks of treatment the antihypertensive effect practically reaches the maximum, but can continue to amplify within 12 weeks and more. As a result of administration of drug the systolic and diastolic pressure in a prone position decreases and standing. The significant orthostatic effect is absent. Comparison of clinical effects of a usual torasemid and form of drug with the prolonged release of medicinal substance, showed that the last rendered not smaller effect on decrease in diastolic pressure, and extent of decrease in systolic pressure at both drugs was also similar. Drug with the prolonged release of medicinal substance showed big efficiency at patients with controlled arterial blood pressure after three months of treatment in comparison with a usual form of a torasemid.
When Britomar is appointed for the first time, removal of sodium with urine amplifies, at least, within the first week of administration of drug. At constant reception, losses of sodium with urine are compared to its quantity arriving with food. At sharp drug withdrawal Britomar, within several days arterial blood pressure returns to the level at which it was prior to treatment, without exceeding it.

Indications
− an edematous syndrome owing to chronic heart failure, diseases of kidneys and a liver
− essential arterial hypertension as monotherapy or in a combination with other antihypertensive

Side effects
are listed below the observed side reactions with a frequency of their occurrence: very frequent (≥1/10), frequent (≥1/100, & lt, 1/10), infrequent (≥1/1000, & lt, 1/100), rare (≥1/10000, & lt, 1/1,000), very rare (& lt, 1/10,000), including separate messages.
Often
– dizziness, a headache, drowsiness
– diarrhea
– increase in frequency of urination, a polyuria, a nocturia
Infrequently
– a hypercholesterolemia, a lipidemia
– myotonia of the lower extremities
– premature ventricular contraction, tachycardia, heartbeat
– face reddening
– nasal bleedings
– a polydipsia, an abdominal pain, a meteorism
– desires to urination
– an asthenia, weakness, thirst, increased fatigue, hyperactivity, nervousness, confusion of consciousness
– increase in number of thrombocytes
– an erythropenia, a leukopenia, thrombocytopenia
Should be taken into account and other side effects to which nausea, vomiting, a hyperglycemia, a hyperuricemia, a hypopotassemia, a hypovolemia, arterial hypotension, impotence, shunt thrombosis, skin reactions and a faint belong.

Contraindications
– hypersensitivity to a torasemid, drugs of group of sulphonylurea or any of excipients
– an anury
– hereditary intolerance of a galactose, deficiency of Lapp-lactases enzyme (the disease observed among residents of Lapland), disturbances of absorption of glucose or a galactose
– a hepatic coma, a prekomatozny state
– a renal failure with the accruing azotemia
– arrhythmias
– a renal failure after intake of the medicines causing injury of kidneys
– pregnancy and the period of a lactation
– the children’s and teenage age up to 18 years

Medicinal interactions
Influence of a torasemid on other medicines
to Patients with essential arterial hypertension torasemid was appointed together with ß blockers, blockers of calcium channels and inhibitors of angiotensin-converting enzyme (iAPF). In stagnant heart failure torasemid it was appointed together with cardiac glycosides, APF inhibitors and nitrates. Any of these combinations did not lead to emergence of new or unexpected side effects.
Torasemid does not influence linking with proteins of blood plasma of glibenclamide or warfarin or anticoagulative effects of a fenprokumon (close derivative warfarin), does not change pharmacokinetics of digoxin and a karvedilol. At healthy volunteers the joint purpose of a torasemid with Spironolactonum led to considerable decrease in renal clearance of the last and respectively, to increase in AUC. Nevertheless, clinical experience showed that there is no need for change of doses any of these drugs.
Influence of medicines on torasemid
Salicylates: torasemid and salicylates compete for secretion in renal tubules therefore joint purpose of a torasemid to the patients accepting high doses of salicylates can bring in increase in concentration of drug to toxic. At the same time, though interaction of a torasemid with non-steroidal anti-inflammatory drugs (including acetylsalicylic acid) was not studied, joint prescribing of these medicines with other loopback diuretics (furosemide) sometimes caused a renal failure.
Indometacin: the natriuretic effect of a torasemid (as well as many other diuretics) is partially inhibited by joint prescribing of indometacin. This effect was observed when assigning a torasemid to patients who were on a diet with reduced consumption of salt (no more than 50 mg-ekv of sodium a day), but it was not observed at normal consumption of salt by patients (150 mg-ekv of sodium a day).
Cimetidinum and spironalokton: does not affect pharmacokinetic properties and diuretic activity of a torasemid.
Digoxin: there are data that joint appointment with digoxin increases AUC by 50%, nevertheless, it does not demand change of doses of the appointed drugs.
Holestiramin: reduces absorption of the torasemid accepted inside. If to one patient are appointed together torasemid and holestiramin, it is not recommended to accept them inside at the same time.
Probenetsid: combined use with probenetsidy reduces secretion of a torasemid in proximal tubules of nephron, thus, reducing diuretic activity of drug.
Lithium: it is known that diuretics reduce renal clearance of lithium that can lead to increase in its concentration to toxic. For this reason the combined use of lithium and diuretic if it is appointed, has to be carried out with extreme care. Combined use of lithium and a torasemid was not studied.
Aminoglycosides, cephalosporins and Acidum etacrynicum: there are data that torasemid in especially high doses can strengthen from – and nephrotoxicity of aminoglycosides, toxicity of derivatives of platinum and nephrotoxic effect of cephalosporins. Therefore the concomitant use of these drugs is not recommended.

Overdose
overdose Cases are not described by the drug Britomar, but it is possible to assume symptoms on the basis of pharmacological properties of drug.
Symptoms: dehydration, hypovolemia, arterial hypotension, hyponatremia, hypopotassemia, gipokhloremichesky alkalosis and pachemia.
Treatment: completion of the lost volume of liquid and electrolytes.
Today, given about physiological mechanisms (for example, change of pH of urine) which would promote the fastest removal of a torasemid and its metabolites from an organism, no. Torasemid does not give in to dialysis and, therefore, the hemodialysis will not accelerate its removal.

To Store storage conditions in the dry place at a temperature not above 30 °C.
To store out of children’s reach.

the Address of the organization accepting in the territory of the Republic of Kazakhstan claims from consumers on quality of products (goods): Representative office Takeda Osteuropa Holding GmbH (Austria) in Kazakhstaneg. Almaty, Shashkin St. 44 Phone number: +7 (727) 2444004 Fax: +7 (727) 2444005
To Develop the e-mail address of DSO-KZ@takeda.com