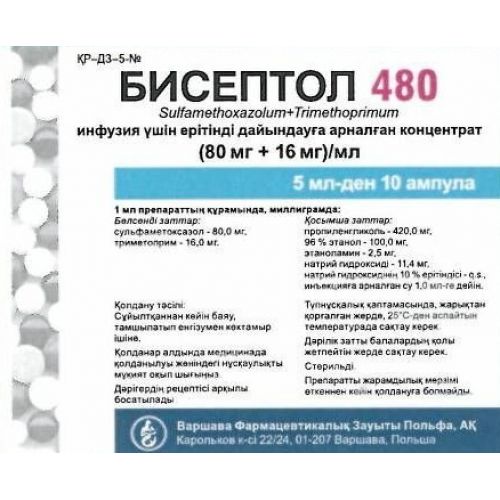 Pharmacotherapeutic group
Antibacterial drugs for system use. Streptocides and trimeto uses Streptocides in a combination with Trimethoprimum and its derivatives. Co-trimoxazole.
The ATX J01EE 01 code

of the Contraindication
– hypersensitivity to streptocides, Trimethoprimum, to –
to a trimoksazol or any auxiliary component of drug
– serious damage of a parenchyma of a liver
– a blood disease (aplastic anemia, B12-scarce anemia, an agranulocytosis, a leukopenia)
– it is not necessary to use drug at patients with heavy hematologic
disturbances
– a liver failure
– a heavy renal failure
– children’s age up to 3 years (except for treatment or prevention
of the pneumonia caused by Pneumocystis jiroveci)
– deficit glyukozo-6 fosfatdegidrogenaza
– pregnancy and the period of a lactation
– a hyperbilirubinemia at children

Medicinal interactions
It is necessary to inform the doctor on all drugs used recently as prescription and without prescription.
At patients of advanced age, use of Biseptolum 480 along with some diuretics, especially tiazidam, increases risk of decrease in quantity of thrombocytes. At patients, treated co-trimoxazole and preventively accepting Pyrimethaminum (antimalarial means) in doses of 25 mg a week, noted cases of development of megaloblastny anemia. Use of combination therapy of this kind is not recommended. Biseptolum 480 can exponentiate effect of the anticoagulants, Phenytoinum, hypoglycemic medicines derivative of sulphonylurea and a message to increase in concentration of digoxin in blood serum.
At patients, treated co-trimoxazole and cyclosporine (for example, after transplantation of kidneys) observed tranzitorny deterioration in function of kidneys.
At simultaneous use of a methotrexate and co-trimoxazole it is necessary to apply salts of folic acid.
Diuretics (tiazida and at elderly patients are more often) increase risk of developing megaloblastny anemia.
At simultaneous use with indometacin the increase in concentration of sulfamethoxazole in blood is possible.
The medicines oppressing a marrowy hemopoiesis increase risk of myelosuppression.
Biseptolum 480 can reduce efficiency of tricyclic antidepressants.
Biseptolum 480 can also influence procaineamide, amantadin and rifampicin. At simultaneous use of co-trimoxazole and rifampicin within a week there is a reduction of elimination half-life of Trimethoprimum. It has, however, no great clinical value. At simultaneous use of co-trimoxazole and procaineamide or an amantadin there can occur increase in concentration in blood serum of the listed medicines.
At simultaneous use of co-trimoxazole and a zidovudine the risk of development of hematologic disturbances and therefore it is necessary to conduct blood tests increases.
Drug contains ethanol and therefore simultaneous introduction with metronidazole can cause a syndrome of intolerance of alcohol.

It is only necessary to appoint the special instructions Biseptolum when advantages exceed risk.
It is necessary to be careful when prescribing Biseptolum to 480 patients with deficiency of folic acid (for example, to the faces dependent on alcohol, receiving treatment by anticonvulsants, with a sprue and to elderly people), to patients with asthma and a severe form of an allergy, to patients with diseases of the blood circulatory system and a respiratory system, a disease of a thyroid gland because after introduction of high doses, there can occur excessive hydration. During use of drug it is necessary to support an appropriate diuresis. At the exhausted patients the risk of emergence of crystals of streptocides in urine increases.
At therapy course duration more than 5 days and/or increase in a dose of drug it is necessary to control a pattern of peripheral blood, at emergence of pathological changes it is necessary to appoint folic acid in a dose of 5-10 mg/days or folinat calcium. At considerable decrease in number of any blood cells Biseptolum 480 should be cancelled. Patients with a serious hematologic illness can appoint Biseptolum 480 only as an exception.
It is recommended to carry out monitoring of potassium concentration in serum, considering emergence of risk of increase in its concentration (hyperpotassemia).
During intake of Biseptolum 480 (the same as during intake of other antibacterial agents) the pseudomembranous coloenteritis of different degree of manifestation from easy to life-threatening can develop therefore timely diagnosis of this disease at patients who during use of antibacterial medicine had a diarrhea is important.
It is necessary to avoid administration of the drug Biseptolum to 480 patients with the diagnosed porphyria or to patients who have a risk of development of a sharp porphyria because drug can strengthen symptoms of this disease.
It is not necessary to use the drug Biseptolum 480 in treatment of the pharyngitis caused by beta and hemolytic streptococci of group A.
In case of the first symptoms of skin rash it is necessary to stop drug use.
It was reported about development of life-threatening skin reactions: Stephen-Johnson’s syndrome and a toxic epidermal necrolysis at use Biseptolum 480.
Patients have to be informed on signs and symptoms and also to look round regularly regarding development of reactions from skin. The highest risk of development of a syndrome of Stephen-Johnson and a toxic epidermal necrolysis is noted within the first weeks of treatment. If symptoms and signs of a syndrome of Stephen-Johnson, a toxic epidermal necrolysis (for example the progressing skin rash, it is frequent with bubbles or erosion of mucous), treatment Biseptolum 480 are revealed it has to be stopped.
The best treatment outcome for a syndrome of Stephen-Johnson and toxic epidermal necrolysis can be reached at early identification and immediate cancellation of any drug causing suspicions.
If at the patient Stephen-Johnson’s syndrome or a toxic epidermal necrolysis against the background of use of the drug Biseptolum 480 developed, never this patient can appoint it repeatedly.
Use of the drug Biseptolum 480 for patients with a renal failure.
It is necessary to be careful during use of medicine for patsent with a renal failure.
Use of the drug Biseptolum 480 for patients of old age
For patients of advanced age increases risk of heavy side effects of Biseptolum 480, including injury of kidneys or a liver. Most often the described heavy side effects of Biseptolum at elderly patients are strong skin reactions, oppression of marrow and also thrombocytopenia with a purpura or without purpura. Joint intake of Biseptolum 480 and diuretic drugs increases risk of a purpura.
Influence on ability of control of vehicles and service of potentially dangerous devices
Influence of Biseptolum 480 on ability of control of vehicles and to service of moving mechanisms is not established.

Overdose
Symptoms: nausea, vomiting, dizzinesses, headache, confusion of consciousness. At a severe form of overdose of Trimethoprimum the marrow depression was noted.
Treatment: at emergence of side effects it is necessary to cancel drug immediately. To appoint gastric lavage, input of the fluid, correction of electrolytic disturbances, introduction in oil of 5-15 mg/days of calcium of the folinat (eliminates effect of Trimethoprimum on marrow). If necessary — a hemodialysis.

A form of release and packing
On 5 ml in ampoules of colourless glass. Over the place of a break of an ampoule there is a point of white or red color and a strip in the form of a ringlet of yellow color.
On 5 ampoules put in blister strip packaging from a film polyvinylchloride.
On the 2nd blister strip packagings together with the approved instruction for medical use in the state and Russian languages place in a pack from cardboard.

To Store storage conditions in original packing, in the place protected from light, at a temperature not above 25 °C. Not to freeze!
To store out of children’s reach!

Not to apply a period of storage of 2.5 years after an expiration date.

the Owner of the registration certificate
the Warsaw pharmaceutical plant “Polfa” of the joint-stock company, Poland

the Name and the country of the organization packer
the Warsaw pharmaceutical plant “Polfa” of the joint-stock company, Poland

the Address of the organization accepting in the territory of the Republic of Kazakhstan claims from consumers on quality of products (goods)
of JSC Khimfarm,

to Develop the E-mail address of infomed@santo.kz