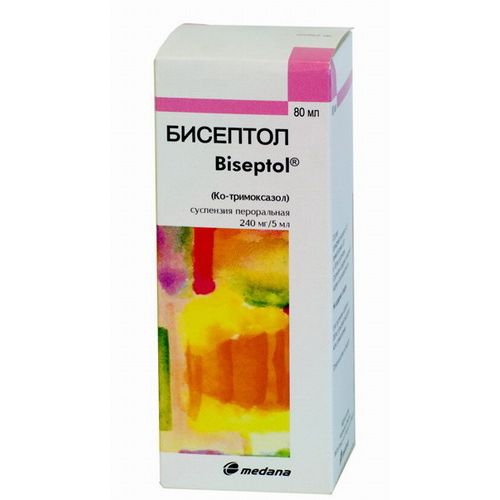 of 100 ml of suspension contain

Suspension of white or light-cream color with a strawberry smell.

Antimicrobial drugs for system use.

Pharmacokinetics Later properties of intake in a therapeutic dose active agents quickly and almost completely (90%) are soaked up in an upper piece of a small intestine and already 60 min. later reach therapeutic concentration in blood and fabrics which remains during the 12th hour. The maximum concentration of active agents in blood plasma are reached in 1-4 hours. Communication with proteins of plasma makes 66% at sulfamethoxazole and 45% at Trimethoprimum. Drug is well distributed in an organism.

Drug gets into milk of mother and through a placental barrier. Sulfamethoxazole and Trimethoprimum are metabolized in a liver.

Elimination half-life fluctuates from 10 to 12 hours.

– acute and persistent infections of an urinary system and a prostate (urethritis, cystitis, prostatitis)

– a brucellosis, osteomyelitis, a nocardiosis, actinomycosis, toxoplasmosis and

the South American zymonematosis (the combination to other

take the Drug inside in time or right after food with a large amount of liquid.

Before the use to shake up before receiving uniform suspension.

5 ml of suspension contain 200 mg of sulfamethoxazole and 40 mg of Trimethoprimum.

The measured cap with a scale is applied to packing.

At children 6 mg of Trimethoprimum and 30 mg of sulfamethoxazole on 1 kg of body weight a day are usually applied. In heavy infections of a dose it is possible to increase by 50%.

from the 3rd month

from the 7th month

Adults and children is more senior than 12 years usually of 20 ml, each 12 hours. The maximum dose (for use in especially hard cases) 30 ml of suspension each 12 hours.

In infections of the caused Pneumocystis carinii of 120 mg/kg/days, each 6 hours within 14-21 days.

A course of treatment in an infection of urinary tract and acute otitis of 10 days, shigelloses of 5 days.

Patients with a renal failure

Frequency is not known

– a leukopenia, a neutropenia, thrombocytopenia

– reactions of hypersensitivity which are shown in the form of fervescence, a Quincke’s disease, anaphylactoid reactions – pulmonary infiltrates as an eosinophilic, allergic alveolitis with cough or short wind

– a headache, dizziness, hallucinations, a sleep disorder, a depression

– neuropathy (including, peripheral neuritis and paresthesias)

– increase in activity of transaminases and concentration of bilirubin, hepatitis, a cholestasia, liver necrosis

in urea nitrogen of blood, serum creatinine, a crystalluria, increase in a diuresis, especially at patients with hypostases of warm origin

– an agranulocytosis, a pancytopenia, megaloblastichesky anemia, hemolytic is much more rare, the methemoglobinemia

to other components of drug

– a concomitant use with dofetilidy

– the profound abnormal liver functions or kidneys (the clearance of creatinine

– the megaloblastny anemia caused by deficiency of folic acid

– treatment of a streptococcal tonsillitis

– children’s age up to 3 months

Biseptolum applied along with diuretics, especially from group of tiazid raises a possibility of manifestation of thrombocytopenia with bleeding. Can extend a prothrombin time at the patients accepting anticoagulants (for example warfarin).

Slows down metabolism of Phenytoinum in a liver (raises its half-life period to 39%). Can also increase concentration of a free methotrexate in blood plasma (increases release of a methotrexate from its connections with proteins).

As well as effect of oral glucose-lowering drugs from group of sulphonylurea can exponentiate other streptocides, Biseptolum.

At Biseptolum co-administration by the patient which receive Pyrimethaminum for prevention of malaria in doses more than 25 mg a week at them megaloblastichesky anemia can develop.

At the patients receiving Biseptolum and cyclosporine after transplantation of a kidney the reversible deterioration in function of kidneys which is shown increase in level of creatinine can be observed.

At a concomitant use with Biseptolum it is necessary to lower an indometacin dose.

Increase in serumal concentration of digoxin, especially at elderly patients is possible, at a concomitant use with Biseptolum.

The efficiency of tricyclic antidepressants can decrease at reception with Biseptolum.

researches Biseptolum can affect results of definition of concentration of a methotrexate in serum by method of competitive linking with proteins when as a ligand the bacterial digidrofolatreduktaza is applied. When determining a methotrexate by a radio immune method of distortions does not arise.

Biseptolum can break reaction of definition of creatinine with use of the alkaline pikrinat of Jaffe (increases creatinine level approximately by 10%).

patients of advanced and senile age and also in associated diseases of a liver and kidneys or at the same time intake of other drugs have higher risk of development of heavy allergic reactions, such as Stephens-Johnson’s syndrome, Lyell’s disease and acute necrosis of a liver. For reduction of risk similar reactions treatment by Biseptolum has to be as much as possible short-term, especially at elderly.

At the first appearance of skin rash or any other heavy side reaction, drug should be cancelled. Patients with tendency to allergic reactions and with bronchial asthma should appoint Biseptolum with care.

At therapy course duration more than 14 days and/or increase in a dose of drug it is necessary to control a pattern of peripheral blood, at emergence of pathological changes it is necessary to take prescribing of folic acid into account.

Patients of advanced age and also at patients with deficiency of folic acid or a renal failure can have hematologic changes characteristic of a lack of folic acid.

When prescribing Biseptolum the patients who already receive anticoagulants should remember possible strengthening of anticoagulative effect. In such cases it is necessary to define a blood clotting time repeatedly.

Patients should not appoint drug with hereditary intolerance of fructose.

The patient, it is long Biseptolum receiving treatment (especially in a renal failure), it is regularly necessary to do the general analysis of urine and to control function of kidneys. During treatment it is necessary to provide sufficient intake of liquid in an organism an adequate diuresis for prevention of a crystalluria.

Because of a possibility of hemolysis by the patient with deficiency of glyukozo-6-phosphate-dehydrogenase Biseptolum is appointed only according to absolute indications and in the minimum doses.

Neobkhodimimo to be careful at patients with a porphyria or dysfunction of a thyroid gland.

At the patients accepting Biseptolum in high doses it is regularly necessary to control potassium content in serum. High doses of Biseptolum what are used at treatment of pneumocystic pneumonia can lead to progressing, but to reversible increase in content of potassium in serum at considerable number of patients. Even reception of the recommended Biseptolum doses can cause a hyperpotassemia if it is appointed against the background of disturbances of potassium exchange, a renal failure or a concomitant use of the drugs provoking a hyperpotassemia.

At treatment by high doses of Biseptolum it is necessary to consider a possibility of development of a hypoglycemia, usually in several days after an initiation of treatment. The risk of a hypoglycemia is higher at patients with renal failures, liver diseases, malnutrition.

Should be limited performance of work, mental and physical reactions and driving of the car demanding high speed, in case of such side effects as: headache, dizziness, drowsiness and hallucinations

Symptoms of chronic overdose: hemopoiesis oppression (thrombocytopenia, a leukopenia) and also other pathological changes of a picture of blood owing to insufficiency of folinovy acid.

Treatment (depending on symptomatology): prevention of further absorption of drug (for example, intake of activated carbon), strengthening of renal excretion by an artificial diuresis, a hemodialysis (peritoneal dialysis is inefficient). It is necessary to control a blood count and content of electrolytes. For elimination of gematotoksichesky effect it is possible to appoint folinat calcium in a dose 5-15 mg a day before restoration of a normal gematopoez.

On 80 ml of drug place in bottles from orange glass with a white polyethylene cover. On 1 bottle together with the instruction for medical use in the state Russian languages and a measured glass with a scale pack into a cardboard pack.

To Store storage conditions in original packing at a temperature not over 25C.

To store out of children’s reach.

After the first opening of packing – 8 months.

Not to apply after an expiration date.

of Medan of JSC Pharm

To develop the E-mail address of standart@santo.kz