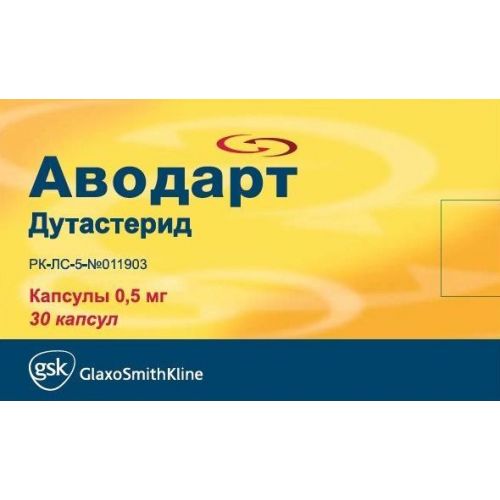 name Dutasterid Lekarstvennaya a form
of the Capsule of 0.5 mg

Indications
– treatment and prevention of a benign hyperplasia of the prostate caused by the increased formation of hormone of dihydrotestosterone (reduction of the sizes of a prostate, decrease in a pain syndrome, urination improvement, reduction of risk of emergence of a sharp ischuria and the need for surgical treatment) in monotherapy and in a combination with tamsuloziny

the Route of administration and doses
Adult men (including elderly)
At monotherapy is recommended to apply Awodart on one capsule (0.5 mg) once a day inside.
At combination therapy it is recommended to accept 0.5 mg of Awodart in a combination with tamsuloziny in a dose of 0.4 mg once a day.
The capsule should be accepted entirely, without chewing and without opening as the contact mucous with contents of the capsule can cause irritation of an oral cavity and throat.
Awodart accept regardless of meal.
Despite a possibility of quite fast improvement of a state, treatment it is necessary to continue not less than 6 months for objective assessment of effect of drug.
If you forgot to accept Awodart
Nie accept an additional dose for compensation which is missed. Just accept the following dose of drug in time, usual for you.
Patients with renal failures
At reception of 0.5 mg a day with urine less than 0.1% of a dose are allocated and therefore there is no need to reduce a dose at patients with renal failures.
Patients with abnormal liver functions
Awodart is exposed to intensive metabolism, and its elimination half-life makes 3–5 weeks and therefore it is necessary to be careful at treatment of patients with abnormal liver functions.
Destruction of drug
For environment protection do not throw out the treatments of the capsule which remained later in the sewerage and together with household garbage. Ask your druggist as it is correct to destroy drug.

Side effects
the Undesirable phenomena given below are listed depending on anatomo-physiological classification and frequency of occurrence. Frequency of occurrence is defined as follows: very often (≥1/10), it is frequent (≥1/100 and & lt, 1/10), infrequently (≥1/1,000 and & lt, 1/100), is rare (≥1/10,000 and & lt, 1/1,000), is very rare (& lt, 1/10,000, including separate cases), it is unknown (frequency cannot be determined on the basis of the available data).
Post-marketing data
Very seldom (≤ 10000)
– allergic reaction (rash, an itching, urticaria, the localized hypostases, a Quincke’s disease, collapse)
– pains in the field of testicles and testicular hypostasis
– depressive disorders
Sometimes (³ 1: 1000 and & lt, 1: 100)
– the alopecia (reduction of pilosis of integuments), a hypertrichosis
Is available interrelation between reception of a dutasterid (in the form of monotherapy or in a combination with tamsuloziny) and development of disorders on the sexual soil (impotence, change (decrease) of a libido, disturbance of an ejaculation, morbidity and increase in chest glands). These disorders can exist after the therapy termination.

Medicinal interactions
Avodart is metabolized by an isoenzyme of CYP3A4 of a fermental system of P450 cytochrome. In the presence of CYP3A4 inhibitors of concentration of Avodart can increase in blood.
At simultaneous use with CYP3A4 inhibitors verapamil and diltiazem note decrease in clearance (37% and 44% respectively). At the same time, amlodipin, other blocker of calcium channels, does not reduce Avodart’s clearance.
Reduction of clearance and the subsequent increase in its concentration in blood at simultaneous use of Avodart and CYP3A4 inhibitors is not significant owing to the wide range of safety limits and therefore there is no need to reduce its dose.
Avodart is not metabolized by the following isoenzymes of a system of P450 cytochrome of the person: CYP1A2, CYP2A6, CYP2E1, CYP2C8, CYP2C9, CYP2C19, CYP2B6 or CYP2D6.
Avodart does not inhibit the enzymes of a system of P450 cytochrome of the person participating in metabolism of medicines.
Avodart does not force out warfarin, atsenokumarol, fenprokumon, diazepam and Phenytoinum from sites of their linking with proteins of plasma, and these drugs, in turn, do not force out it. Also drugs tamsulozin, terazozin, warfarin, digoxin and holestiramin do not interact with Avodart.
At Avodart’s use along with hypolipidemic drugs, APF inhibitors, beta-blockers, blockers of calcium channels, corticosteroids, diuretics, non-steroidal anti-inflammatory drugs, phosphodiesterase inhibitors like V and hinolonovy antibiotics any significant medicinal interactions are not noted.

The special
instructions Avodart it is absorbed through skin and therefore women, children and teenagers have to avoid contact with the damaged capsules. In case of contact with the damaged capsules it is necessary to wash the respective site of skin with water with soap at once.
Influence of a liver failure on pharmacokinetics of a dutasterid was not studied, but in connection with his intensive metabolism and elimination half-life from 3 to 5 weeks, it is necessary to be careful at Avodart’s use for patients with liver diseases.
Combination therapy tamsuloziny a hydrochloride and development of heart failure
In two 4 years’ clinical trials the frequency of development of heart failure (the composite term of the celebrated events, generally heart failure and stagnant heart failure) was higher at the patients receiving a combination of a dutasterid and α1-блокатора, mainly, a tamsulozina of a hydrochloride than at the patients who were not receiving the combined treatment. In two 4 years’ clinical trials the frequency of development of heart failure remained low (≤ 1%) and varied between researches. But in general divergences of indicators of frequency of side effects from a cardiovascular system were not noted. Causal relationships between treatment dutasteridy (one or in a combination with α1-блокатором) and heart failure were not established.
Influence on identification of the prostates specific antigens (PSA) and
a prostate cancer
At patients with DGPZh it is necessary to conduct a manual rectal research and other methods of a research of a prostate prior to the Avodart drug treatment and to periodically repeat these researches in the course of treatment for an exception of development of a prostate cancer.
Definition of concentration of the DOG in serum is an important component of process of the screening directed to detection of a prostate cancer.
After 6-month therapy dutasterid reduces the PSA serumal levels at patients with a benign hyperplasia of a prostate approximately by 50%.
To the patients taking the drug Avodart the new basic level of the DOG after 6 months of therapy has to be defined.
Any stable increase in the DOG level concerning the smallest value at the Avodart drug treatment can demonstrate development of a prostate cancer (in particular, a prostate cancer with high degree of a differentiation on Gleason’s scale) or non-compliance with the mode of therapy by the drug Avodart and has to be exposed to careful assessment even if these DOG levels remain within normal values with the patients who are not accepting inhibitors 5α-reduktazy.
Level of the general DOG returns to a reference value within 6 months after cancellation of a dutasterid.
The ratio of content of a free DOG to the general remains to constants even against the background of therapy dutasteridy. At expression of this ratio in shares for detection of a prostate cancer from the men receiving dutasterid the correction of this size is not required.
Risk of developing a breast cancer
In clinical trials during treatment of DGPZh 2 cases of development of a breast cancer in the patients applying dutasterid were revealed. The first case developed in 10 weeks after the beginning of therapy, the second – in 11 months, 1 case of a breast cancer at the patient from group of placebo was also revealed. The attending physician has to instruct accurately the patient about need of the immediate notification in case of detection of any changes in area of chest gland, such as consolidation of fabrics and change of outward of nipples. The ratio between long-term reception of a dutasterid and risk of developing a breast cancer is unknown.
The prostate cancer
In clinical trial for 4 years at 1517 from more than 8000 men with preliminary negative takes of a biopsy and the level of DOG OF 2.5-10 ng/ml, was diagnosed a prostate cancer. Higher frequency of development of cancer in patients from group of a dutasterid (n=29, 0.9%) in comparison with the group receiving placebo was observed (n=19, 0.6%). It was not established interactions between reception of a dutasterid and degree of a prostate cancer. The men accepting dutasterid have to be examined regularly on risk of developing of a prostate cancer, including carrying out the DOG of the test.
The reproductive ability at the men accepting Avodart
Priyem preparata Avodart can be followed by reduction of quantity, volume and mobility of spermatozoa, however influence on ability to conceive remains not clear.
Pregnancy and the period of a lactation
Pregnant women and women with suspicion on pregnancy have to avoid contact with the damaged drug capsules. Dutasterid has ability to be absorbed through skin and to make negative impact on male normal fetation. The period in the first 16 weeks of pregnancy is especially dangerous.
Use of a dutasterid was not studied at women since preclinical data assume that suppression of the DGT level in circulation can break forming of external genitalias at male fruits if mother during pregnancy received dutasterid.
Use condom during sexual contact as dutasterid gets into sperm of the men accepting Avodart. If your partner is pregnant or there is a suspicion on pregnancy, it is necessary to protect it from contact with sperm as dutasterid a floor can influence normal fetation men’s.
Consult with your doctor if the pregnant woman contacted to Avodart capsule contents.
There are no data on discharge of a dutasterid with breast milk.
Features of influence of medicine on ability to run the vehicle or potentially dangerous mechanisms
Avodart’s Reception does not influence driving of the car and work with mechanisms.

Overdose
Symptoms: at overdose of side effects it was not noted.
Treatment: there is no specific antidote and therefore at suspicion on overdose it is necessary symptomatic and maintenance therapy.

4 years
not to use a period of storage after expiry date. 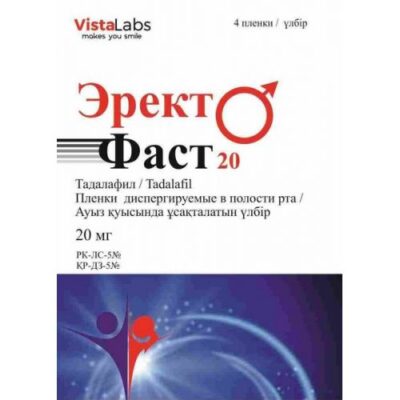 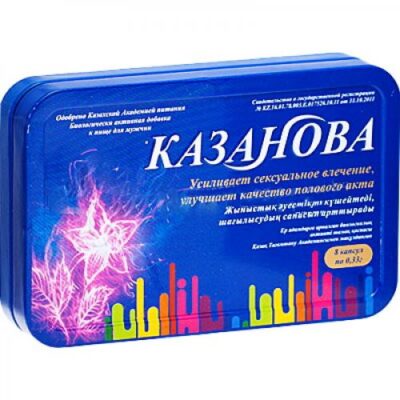 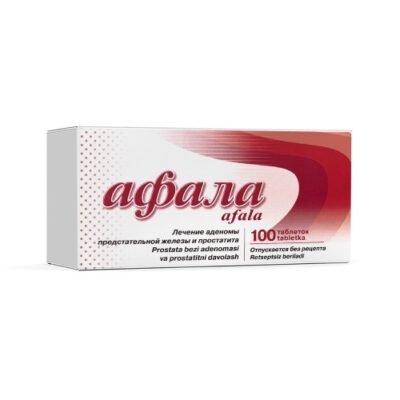 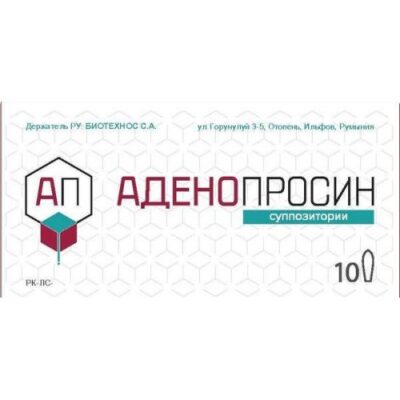