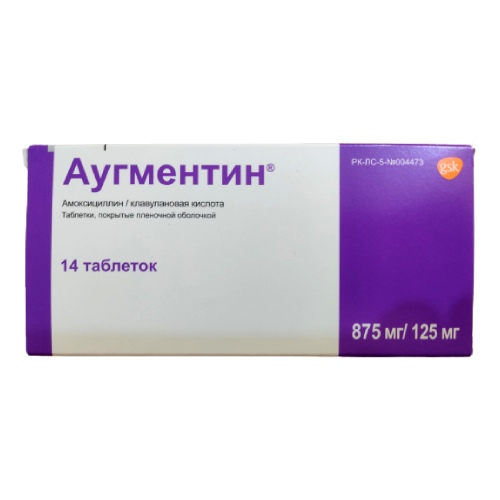 Amoxicillin is partially excreted in the urine as inactive penicillic acid in an amount equivalent to 10-25% of the dose taken. Clavulanic acid is extensively metabolized in the body and is excreted in urine and feces, as well as in the form of carbon dioxide through exhaled air.

Amoxicillin is excreted primarily by the kidneys, while clavulanic acid is eliminated via both renal and extrarenal mechanisms. After a single oral administration of one tablet of 250 mg / 125 mg or 500 mg / 125 mg, approximately 60-70% of amoxicillin and 40-65% of clavulanic acid are excreted unchanged in the urine during the first 6 hours.

Various studies have confirmed that urinary excretion is 50-85% for amoxicillin and 27-60% for clavulanic acid within 24 hours. With regard to clavulanic acid, the maximum amount is excreted within the first 2 hours after ingestion.

Augmentin® is a combination antibiotic containing amoxicillin and clavulanic acid, with a broad spectrum of bactericidal action, resistant to beta-lactamase.

Amoxicillin is a semi-synthetic antibiotic (beta-lactam), with a broad spectrum of action, active against many gram-positive and gram-negative microorganisms.

Amoxicillin is susceptible to degradation by beta-lactamase produced by resistant bacteria, and therefore the spectrum of activity of amoxicillin alone does not include microorganisms that produce these enzymes.

The presence of clavulanic acid in the composition of Augmentin® protects amoxicillin from the destructive action of beta-lactamases and expands its spectrum of antibacterial activity to include microorganisms that are usually resistant to other penicillins and cephalosporins. Clavulanic acid in the form of a single drug does not have a clinically significant antibacterial effect.

Mechanism of development of resistance

There are 2 mechanisms for the development of resistance to Augmentin®:

– inactivation by bacterial beta-lactamases that are insensitive to the effects of clavulanic acid, including classes B, C, D

– deformation of the penicillin-binding protein, which leads to a decrease in the affinity of the antibiotic in relation to the microorganism

The impermeability of the bacterial wall, as well as pumping mechanisms, can cause or contribute to the development of resistance, especially in gram-negative organisms.

Augmentin® has a bactericidal effect on the following microorganisms:

* Natural sensitivity in the absence of acquired resistance

– exacerbation of chronic bronchitis (with a confirmed diagnosis)

– infections of the skin and soft tissues (in particular, cellulitis, animal bites, acute abscesses and phlegmon of the maxillofacial region)

– infections of the bones and joints (particularly osteomyelitis)

Official recommendations on the appropriate use of antibacterial agents should be taken into account.

Sensitivity to Augmentin® may vary by geographic location and time. Before prescribing the drug, if possible, it is necessary to assess the sensitivity of strains in accordance with local data and determine the sensitivity by taking and analyzing samples from the individual patient, especially in case of severe infections.

The dosage regimen is set individually depending on age, body weight, kidney function, infectious agents, as well as the severity of the infection.

To reduce the potential risk of affecting the gastrointestinal tract, Augmentin® is recommended to be taken with food, at the beginning of a meal for maximum absorption. The duration of therapy depends on the patient’s response to the treatment. Some pathologies (particularly osteomyelitis) may require a longer course. Treatment should not be continued for more than 14 days without reassessment of the patient’s condition. If necessary, it is possible to carry out stepwise therapy (initially, intravenous administration of the drug, followed by the transition to oral administration).

This dosage form is not intended for children under 12 years of age or children weighing less than 40 kg. Such children are prescribed Augmentin® in the form of a suspension for oral administration.

Patients with impaired renal function
Dose adjustments are based on the maximum recommended dose of amoxicillin and creatinine clearance.

Dose adjustment is not required

Tablets with a dosage of 875 mg / 125 mg should only be used in patients with creatinine clearance > 30 ml / min.
Patients on hemodialysis
Dose adjustments are based on the maximum recommended dose of amoxicillin.

Tablets with a dosage of 875 mg / 125 mg should only be used in patients with creatinine clearance > 30 ml / min.
Patients with impaired liver function
Treatment is carried out with caution; regularly monitor liver function.

Side effects observed in clinical studies and in the post-marketing period are presented below and are listed depending on the anatomical and physiological classification and frequency of occurrence.

– candidiasis of the skin and mucous membranes

Nausea is more common with high doses of the drug. To reduce the degree of manifestation, it is recommended to take the suspension at the beginning of a meal.

– antibiotic-associated colitis (including pseudomembranous and hemorrhagic)

– a syndrome similar to serum sickness

– exfoliative bullous dermatitis, acute generalized exanthematous pustulosis. With the development of these symptoms, the drug should be discontinued.

– known hypersensitivity to penicillins or to any component of the drug

Augmentin® affects the intestinal flora and leads to a decrease in estrogen reabsorption and a decrease in the effectiveness of combined oral contraceptives.

Cases of an increase in prothrombin time (acenocoumarol and warfarin) have been identified with the simultaneous use of Augmentin® and anticoagulants, it is necessary to conduct appropriate monitoring with dose adjustment of Augmentin® if necessary.

Penicillins can reduce the excretion of methotrexate, which is a potential risk of increasing its toxicity.

In patients taking mycophenolate mofetil, when used together with Augmentin®, the concentration of the active metabolite of mycophenolic acid at the initial dose is reduced by approximately 50%. Changes in initial dose concentrations may not be consistent with changes in total mycophenolic acid exposure. However, clinical monitoring is recommended for patients taking mycophenolate mofetil simultaneously with Augmentin or immediately after taking the antibiotic.

Before starting treatment with Augmentin, it is necessary to collect a detailed history regarding previous hypersensitivity reactions to penicillins, cephalosporins or other beta-lactam antibiotics.

Serious and sometimes fatal hypersensitivity reactions (anaphylactic shock) to penicillins have been described, more often in patients with previous hypersensitivity to penicillins. In the event of an allergic reaction, it is necessary to stop treatment with Augmentin® and start alternative therapy. With the development of serious hypersensitivity reactions, adrenaline should be administered to the patient immediately. Oxygen therapy, intravenous steroids, and airway management, including intubation, may be required.

Augmentin® should not be prescribed if infectious mononucleosis is suspected, because in patients with this disease, amoxicillin can cause a skin rash, which makes it difficult to diagnose the disease.

Long-term treatment with Augmentin® may be accompanied by excessive growth of microorganisms insensitive to it.

Cases of pseudomembranous colitis have been identified with antibiotic use, the severity of which ranged from mild to severe, life-threatening patients. Thus, it is necessary to keep in mind the possibility of this pathology in patients with diarrhea while taking antibiotics or after the end of the course of therapy. In the event of the development of prolonged or significant diarrhea, in the presence of cramps in the abdomen, treatment with Augmentin® should be immediately discontinued and patients should be referred for further examination.

In general, Augmentin® is well tolerated and has a low toxicity characteristic of all penicillins. With prolonged treatment with Augmentin®, it is recommended to periodically evaluate the functions of the kidneys, liver, and hematopoietic organs.

In patients receiving Augmentin®, an increase in prothrombin time is occasionally observed, therefore, with the simultaneous use of Augmentin® and anticoagulants, appropriate monitoring should be carried out with a possible reduction in the dose of the anticoagulant, if necessary.

Augmentin® should be used with caution in patients with impaired liver function. Signs and symptoms of liver damage usually occur during or immediately after the start of treatment, but in some cases may not appear for several weeks after stopping therapy. As a rule, they are reversible. Hepatic impairment can be very serious, and death has been reported in extremely rare cases. They have almost always been reported in patients with a serious underlying disease or in those who were concomitantly taking drugs known to potentially affect the liver.

In patients with renal insufficiency, the dose of the drug should be adjusted according to the severity of the disease.

When prescribing the drug to patients with reduced renal function or when using high doses, seizures may develop.

Rarely, crystalluria may occur in patients with reduced diuresis. During the administration of high doses of amoxicillin, it is recommended to take a sufficient amount of fluid and maintain adequate diuresis to reduce the likelihood of amoxicillin crystal formation. Patients with a catheter need constant evaluation of their condition.

The combined use of allopurinol and amoxicillin increases the likelihood of skin allergic reactions.

During treatment with amoxicillin, enzymatic glucose oxidation methods should be used to determine the content of glucose in the urine, since non-enzymatic methods can lead to false positive results.

The presence of clavulanic acid in Augmentin® can cause non-specific binding of IgG and albumin to the erythrocyte membrane, which leads to a false positive Coombs reaction.

Augmentin® is not recommended for use during pregnancy, unless, in the opinion of a physician, it is necessary.

Augmentin® can be administered while breastfeeding. With the exception of the risk of sensitization due to trace amounts of the drug that passes into breast milk, no adverse effects have been identified in breast-fed children.

In women with preterm rupture of membranes and preterm birth, it was found that prophylactic treatment with a combination of amoxicillin and clavulanate was associated with an increased risk of developing necrotizing enterocolitis in newborns.

There is no data; however, due to the possibility of adverse reactions (dizziness, convulsions), care must be taken.

Symptoms: gastrointestinal disturbances and disturbances in water and electrolyte balance are possible. Amoxicillin crystalluria has been described, in some cases leading to the development of renal failure.

When prescribing the drug to patients with reduced renal function or when using high doses, seizures may develop.

Precipitation of amoxicillin on vesical catheters is possible, especially after administration of high doses by intravenous administration.

Treatment: symptomatic therapy, correction of water and electrolyte balance. Augmentin® is removed from the blood by hemodialysis.

Store at a temperature not exceeding 25 ºС.
Keep out of the reach of children.

Shelf life 3 years
Do not use after the expiration date.