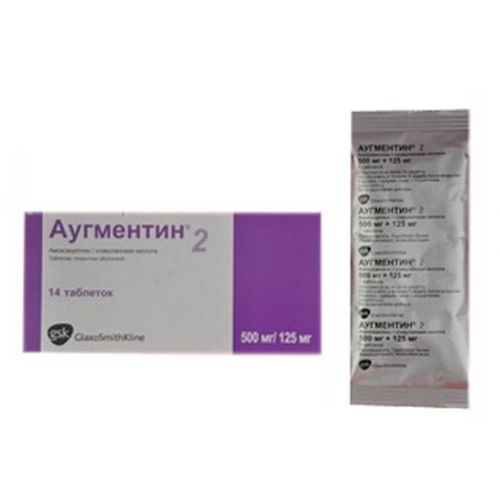 the Trade name
of Augmentin®

the Route of administration and doses
can vary Sensitivity to Augmentinu® from the geographic location and time. Before prescribing of drug it is whenever possible necessary to estimate sensitivity of strains according to local data and to define sensitivity by a fence and the analysis of samples at the specific patient, especially in case of heavy infections.
Аугментин® it can be applied to treatment of the infections caused amoxicillin – sensitive microorganisms, and the multi-infections caused amoxicillin – and clavulanate – the sensitive strains producing beta lactamazu.
The mode of dosing is set individually depending on age, body weight, function of kidneys, infectious agents and also from severity of an infection.
For decrease in potential risk of influence on digestive tract, Augmentin® is recommended to be accepted together with food, at the beginning of food for its maximum absorption. Time of the carried-out therapy depends on the response of the patient to the carried-out treatment. Some pathologies (in particular, osteomyelitis) can demand longer course. It is not necessary to continue treatment more than 14 days without repeated assessment of a condition of the patient. If necessary performing step therapy is possible (intravenous administration of drug with the subsequent transition to oral administration in the beginning).
Adults and children are more senior than 12 years or with body weight more than 40 kg

the Easy and medium-weight course of an infection (standard dose)

Heavy infections (a lower respiratory tract infection, an infection of an urinogenital path)

the Mode of dosing Augmentina®

Correction of a dose is not required

Side effects
Very often ≥ 1 of 10, is frequent ≥ 1 of 100 and & lt, 1 of 10, sometimes ≥ 1 of 1000 and & lt, 1 of 100, is rare ≥ 1 of 10000 and & lt, 1 of 1.000, also lt is very rare, 1 of 10000
is frequent
– candidiasis of skin and mucous covers
– nausea, vomiting, diarrhea
Nausea meets at use of high doses of drug more often. For decrease in extent of manifestation it is recommended to accept suspension at the beginning of meal.
Infrequently
– dizziness, a headache
– dyspepsia
– moderate increase in level of liver enzymes of ALT/nuclear heating plant
– skin rash, an itching, a small tortoiseshell
Seldom
– a reversible leukopenia (including a neutropenia), thrombocytopenia
– a multiformny erythema
Is unknown
– a reversible agranulocytosis and hemolytic anemia, increase in a bleeding time and the index of a prothrombin time
– a Quincke’s disease, an anaphylaxis, the syndrome similar to a serum disease, an allergic vasculitis
– reversible superactivity and spasms
– the antibtotiko-associated colitis (including pseudomembranous and hemorrhagic)
– black hairy language (chronic hyperplasia of threadlike nipples of language)
– hepatitis, cholestatic jaundice
– Stephens-Johnson’s syndrome, a toxic epidermal necrolysis, bullous exfoliative dermatitis, sharp generalized exanthematous pustulyoz. At development of these symptoms, drug has to be cancelled.
– interstitial nephrite,

the Contraindication crystalluria
– the known hypersensitivity to penicillin or to any component of drug
– the known hypersensitivity to others beta laktamnym to antibiotics (cephalosporins, karbapenema, monobaktama)
– the jaundice or an abnormal liver function which developed against the background of reception of a combination of amoxicillin/clavulanic acid
– children is younger than 12 years or children with body weight less than 40 kg

Medicinal interactions
are not recommended to apply Augmentin® along with probenitsidy. Probenitsid reduces canalicular secretion of amoxicillin and therefore simultaneous use of Augmentina® and probenitsid can lead to the isolated increase in amoxicillin level blood.
Simultaneous use of Allopyrinolum and Augmentina® can increase risk of emergence of allergic reactions. Data on simultaneous use of Allopyrinolum and Augmentina® are absent now.
Аугментин® influences indestinal flora and leads to reduction of the return absorption of estrogen and decrease in efficiency of the combined oral contraceptives.
Cases of increase in a prothrombin time were revealed (atsenokumarol and warfarin) at simultaneous use of Augmentina® and anticoagulants it is necessary to carry out the corresponding monitoring with correcting of a dose of Augmentina® if necessary.
Penicillin can reduce removal of a methotrexate that is potential risk of increase in its toxicity.
At the patients accepting mikofenolat mofetit, at combined use with Augmentinom® the concentration of an active metabolite of mikofenolovy acid when assigning an initial dose decreases approximately by 50%. Change of level of concentration of an initial dose can not correspond to changes of concentration of total exposure of mikofenolovy acid.

Special instructions
Before an initiation of treatment of Augmentinom® need to be collected the detailed anamnesis concerning the previous reactions of hypersensitivity to penicillin, cephalosporins or others beta laktamnye antibiotics.
Also fatal reactions of hypersensitivity (acute anaphylaxis) on penicillin which came to light at patients with the previous hypersensitivity on penicillin more often are described serious, and sometimes. In case of allergic reaction it is necessary to stop treatment of Augmentinom® and to begin alternative therapy. At development of serious reactions of hypersensitivity the patient should enter adrenaline immediately. Oxygenotherapy, the intravenous administration of steroids and ensuring passability of airways including an intubation can be required.
Аугментин® it is not necessary to appoint at suspicion of an infectious mononucleosis as with this disease amoxicillin can cause skin rash in patients that complicates diagnosis of a disease.
Long-term treatment of Augmentinom® can be followed by the overgrowth of microorganisms, insensitive to it.
Cases of development of pseudomembranous colitis against the background of use of antibiotics which weight varied from easy to heavy degree, life-threatening patients were revealed. Thus, it must be kept in mind possibility of this pathology at patients with diarrhea at reception of antibiotics or after the termination of a course of therapy. In case of development of long or considerable diarrhea, in the presence of spasms in a stomach, treatment of Augmentinom® has to be immediately stopped and patients have to be directed to further inspection.
In general, Augmentin® is transferred well and has hypotoxicity inherent to all penicillin. At long treatment of Augmentinom® it is recommended to estimate periodically functions of kidneys, a liver, bodies of a hemopoiesis.
At the patients receiving Augmentin® the increase in a prothrombin time therefore at simultaneous use of Augmentina® and anticoagulants it is necessary to carry out the corresponding monitoring with a possible dose decline of anticoagulant in case of need is occasionally observed.
With care it is necessary to apply Augmentin® at patients with an abnormal liver function. Signs and symptoms of damage of a liver usually arise in time or right after an initiation of treatment, but in certain cases can not be shown within several weeks after the therapy termination. As a rule, they are reversible. Hepatic violations can be very serious, and in extremely exceptional cases was reported about death. Almost always they were registered at patients with a serious basic disease or at those who at the same time took the drugs known as potentially influencing a liver.
At patients with a renal failure the dose of drug has to be adjusted according to disease severity.
When prescribing drug to patients with reduced function of kidneys or when using high doses the development of spasms is possible.
Patients with a reduced diuresis in rare instances can have a crystalluria. During introduction of high doses of amoxicillin it is recommended to accept enough liquid and to support an adequate diuresis for reduction of probability of formation of crystals of amoxicillin. At patients with a catheter constant assessment of their state is necessary.
Combined use of Allopyrinolum and amoxicillin increases a likelihood of development of skin allergic reactions.
During treatment by amoxicillin for determination of content of glucose in urine it is necessary to use methods of fermental oxidation of glucose as not fermental methods can lead to obtaining false positive results.
Presence of clavulanic acid at Augmentine® can be the cause of nonspecific binding of IgG and albumine with a membrane of erythrocytes that leads to false positive reaction of Koombs.
Pregnancy and the period of a lactation
of Augmentin® is not recommended to be applied during pregnancy unless, according to the doctor, it is necessary.
Аугментин® it can be appointed when breastfeeding. Except for risk of development of a sensitization in connection with trace amounts of the drug getting into breast milk, undesirable effects at the children who are on breastfeeding are not revealed.
At women at a premature rupture of fetal membranes and premature births it was revealed that preventive treatment by a combination of amoxicillin and clavulanate was associated with increase in risk of developing a necrotizing coloenteritis at newborns.

There Is no feature of influence of medicine on ability to run the vehicle or potentially dangerous mechanisms data, however, in connection with a possibility of development of side reactions (dizziness, spasms) it is necessary to be careful.

Overdose
Symptoms: gastrointestinal disorders and disturbances of water and electrolytic balance are possible. The amoksitsillinovy crystalluria in certain cases leading to development of a renal failure is described.
When prescribing drug to patients with reduced function of kidneys or when using high doses the development of spasms is possible.
Sedimentation of amoxicillin on vesical catheters, especially after purpose of high doses by intravenous administration is possible.
Treatment: performing symptomatic therapy, correction of water and electrolytic balance. Аугментин® it is brought out of blood by means of a hemodialysis.

To Store storage conditions at a temperature not over 25 ºС.
To store out of children’s reach.