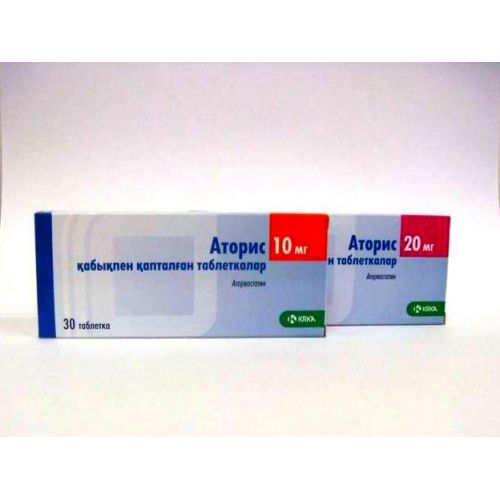 the Trade name
of Atoris®

Description
of the Tablet of round shape, slightly convex, film coated white color. On cross section the kernel of white color is visible.

Pharmacokinetics Absorption properties of an atorvastatin of high, about 80% is soaked up from digestive tract. Time of approach of the maximum concentration (Cmax), on average, 1-2 hours. At women With max is 20% higher, and AUC indicator – is 10% lower. At patients with alcoholic cirrhosis time of achievement of the maximum concentration is 16 times higher than norm. Owing to intensive metabolism at the first passing through a liver bioavailability of an atorvastatin low (12%). The average volume of distribution of an atorvastatin equals 381 l. More than 98% of an atorvastatin contact proteins of blood plasma. Atorvastatin does not get through a blood-brain barrier. It is metabolized mainly in a liver under the influence of P4503A4 cytochrome with formation pharmacological of active metabolites (orto- and parahydroxylated metabolites, beta oxidation products). These are active metabolites which cause about 70% of the inhibiting activity concerning GMG-KoA-reduktazy which remains the 20-30th.
Elimination half-life of an atorvastatin equals to 14 hours. It is removed generally with bile (is not exposed to the significant enterohepatic recirculation, it is not removed during a hemodialysis). About 46% of an atorvastatin are removed with excrements and less than 2% are allocated with urine.
A pharmacodynamics
of Atoris® – hypolipidemic means from group of statines. The main mechanism of action of an atorvastatin is the activity inhibition 3-hydroxy-3-methylglutaryl-coenzyme A – (GMG-KOA-) reductases, the enzyme catalyzing transformation GMG-KoA into mevalonovy acid. This transformation is one of early stages in a chain of synthesis of cholesterol in an organism. Suppression atorvastatiny synthesis of cholesterol results in hyperreactivity of receptors of LDL (lipoproteins of low density) in a liver and also in extrahepatic fabrics. These receptors connect particles of LDL and delete them from blood plasma that leads to decrease in level of LDL cholesterol in blood.
The anti-sclerous effect of Atorisa® is a consequence of impact of drug on walls of vessels and components of blood. Drug suppresses synthesis of the isoprenoids which are growth factors of cells of an internal cover of vessels. Under the influence of an atorvastatin the endothelium – dependent expansion of blood vessels improves. Аторис® reduces the content of cholesterol, lipoproteins of low density, apolipoprotein B, triglycerides. Causes increase in content of LPVP cholesterol (lipoproteins of high density) and apolipoprotein A.
As a rule, action of Atorisa® develops after two weeks of administration of drug, and the maximum effect is reached in four weeks.

the Route of administration and doses
Prior to treatment of the patient by Atoris has to be transferred to the diet providing decrease in maintenance of lipids in blood which needs to be observed during therapy by drug.
The drug is taken inside, on an empty stomach or after a meal.
The dose of drug varies from 10 mg to 80 mg of 1 times/days. The dose of drug is selected taking into account the LPNP initial level, by the purposes of therapy and individual therapeutic effect.
Atoris can be accepted once at any time, but at the same time every day. The essential therapeutic effect is noted after two weeks of treatment, and the maximum effect develops in four weeks. Therefore the dosage should not be changed earlier, than in four weeks after the beginning of administration of drug in the previous dose. Duration of administration of drug depends on indicators of a lipidic range of blood and degree of risk of complications of cardiovascular diseases.
Primary (heterozygous hereditary and polygenic) the hypercholesterolemia (type of Pa) and the mixed lipidemia (Pb type)
Treatment begins with the recommended initial dose which is increased after four weeks depending on reaction of the patient. The maximum daily dose makes 80 mg.
A homozygous hereditary hypercholesterolemia
the Range of doses same, as well as at other types of a lipidemia. The initial dose is selected individually depending on severity of a disease. At most of patients with a homozygous hereditary hypercholesterolemia the optimum effect was observed when using drug in a daily dose of 80 mg (once). Atoris is used as additional therapy to other methods of treatment (plasma exchange) or as the main treatment if therapy by means of other methods is impossible.
At elderly people and at patients with diseases of kidneys of a dose of Atoris it is not necessary to change.
At patients with abnormal liver functions the care in connection with delay of removal of drug from an organism is necessary. In a similar situation it is necessary to control carefully clinical and laboratory indicators and at identification of significant pathological changes the dose has to be reduced or treatment has to be stopped

Side effects
Often
– allergic reactions
– a headache, insomnia, dizziness, paresthesia
– a stethalgia
– intestinal impassability, a meteorism, indigestion, nausea,
diarrhea
– skin rash, an itching
– myalgia, an arthralgia, a back pain
– an asthenia
– increase in level of a creatine kinase in blood
Infrequently
– thrombocytopenia
– anorexia
– impotence
– amnesia
– peripheral neuropathy
– vomiting, pancreatitis
– urticaria
– a myopathy
– discomfort, increase in body weight
– muscle weakness
– increase in level of transaminases (ALT, nuclear heating plant) in blood serum
is rare:
– hepatitis, cholestatic jaundice
– miozita, a rhabdomyolysis
Very seldom
– anafalaktichesky reactions
– a Quincke’s disease, an alopecia, bullous rash (multiformny
erythema, Stephens-Johnson’s syndrome, a toxic epidermal
necrolysis)
– increase or lowering of the level of sugar in blood
For some side effects classified as is ‘very rare’, the causal relationship with drug is not proved.
Increase in level of transaminases of blood serum were dependent on a dose and are reversible for all patients.
Increase in level of a kreatininkinaza more than by 10 times from an allowable limit, is noted at 0.4% of patients, 0.1% of these patients had muscular pains, symptoms of a tendinitis or weakness.
There are single messages about the following side effects of some statines:
– sleep disorders, including insomnia and nightmares
– memory loss
– sexual difficulties
– a depression
– exceptional cases of an intermediate disease of lungs, especially at
long-term therapy

of the Contraindication
– hypersensitivity to any of drug components
– liver diseases in an active stage (including. active chronic
hepatitis, chronic alcoholic hepatitis), a liver failure,
cirrhosis of any etiology, increase in activity of hepatic
transaminases of not clear genesis
– deficiency of lactase, a galactosemia or a sprue of a galactose –
glucose
– a disease of skeletal muscles
– pregnancy and the period of a lactation
– children’s age up to 18 years (the efficiency and safety of use
is not established)

The special
instructions Therapy of Atorisom® does not cancel a standard gipokholesterinemichesky diet which he has to observe during the entire period of treatment.
Increase in activity of hepatic enzymes in blood serum can be observed during treatment of Atorisom®. This increase, as a rule, small has also no clinical value. However control of activity of hepatic enzymes in blood serum before treatment, in 6 weeks, 12 weeks is recommended and at increase in a dose of an atorvastatin. If it is noted triple, rather upper bounds of norm, increase in activity of aspartate aminotransferase (nuclear heating plant) and/or alaninaminotranspherase (ALT), treatment of Atorisom® has to be stopped. Аторис® can cause increase in activity of a kreatinfosfokinaza and aminotransferases.
At the women of reproductive age who are not using reliable contraception, use of Atorisa® is not recommended. If the patient plans pregnancy, it has to stop Atoris’s reception at least a month before the planned pregnancy.
Treatment of Atorisom® can cause a myopathy which sometimes is followed by the rhabdomyolysis leading to an acute renal failure. The risk of this complication increases at a concomitant use with Atorisom® of one or several of the following medicines: derivatives of fibroyevy acid, Niacinum, cyclosporine, nefazadon, some antibiotics, antifungal means from group of ‘azoles’, HIV inhibitors – proteases.
Patients who take essential amount of alcohol or having a case history of a liver have to take Atoris® with caution.
The feature of influence of medicine on ability to run the vehicle or potentially dangerous mechanisms
during treatment needs to be careful during the driving of motor transport and occupation other potentially dangerous types of activity demanding the increased concentration of attention and speed of psychomotor reactions.

Overdose
Symptoms: strengthening of manifestations of side effects of drug.
Treatment: monitoring and maintenance of vital signs and prevention of further absorption of drug (gastric lavage, intake of activated carbon or depletive).
At development of a myopathy with the subsequent rhabdomyolysis and an acute renal failure (rare, but heavy side effect) drug has to be immediately cancelled, and the patient needs to enter diuretic and solution of Natrii hydrocarbonas. If necessary it is necessary to carry out a hemodialysis. The rhabdomyolysis can lead to a hyperpotassemia which elimination requires intravenous administration of Calcii chloridum or calcium of a gluconate, infusion of glucose with insulin, use of exchangers of potassium ions or, in hard cases, carrying out a hemodialysis.

the Producer
of KRK, of. The place is new, Slovenia
Shmaryeshka 6, 8501 the place, Slovenia