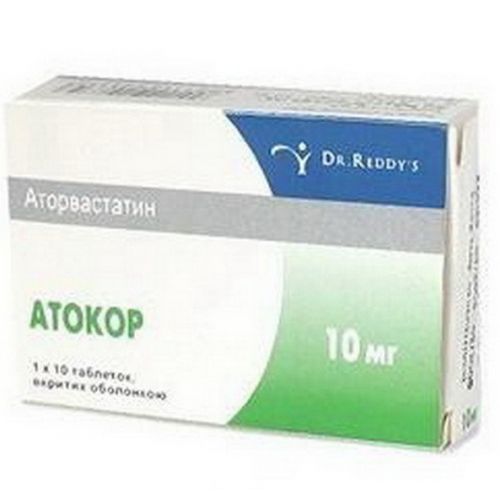 The instruction for use
of medicine for experts
ATOKOP
ATOCOR

The description
the White triangular biconvex tablets film coated with inscription A on one party and 10 or 20 on other party.

Pharmacokinetics Later properties of intake atorvastatin is quickly soaked up, with achievement of the maximum plasma concentration within 1-2 hours. Extent of absorption raises in proportion to increase in a dose of drug. The absolute bioavailability of an atorvastatin is 14%, and the system bioavailability of the inhibiting activity concerning HMG-CoA reductase is about 30%. Though at meal the speed and extent of absorption of drug decrease approximately by 25% and 9%, respectively, however cholesterol/LDL level at reception of an atorvastatin on an empty stomach and at meal time decreases to the same extent.
Atorvastatin for 98% contacts proteins of plasma. It is actively metabolized to orto- and parahydroxylated derivatives and various products of beta oxidation. The inhibiting activity concerning HMG-CoA reductase in plasma approximately for 70% is caused by active metabolites.
Atorvastatin and his metabolites are removed mainly with bile, after hepatic and extrahepatic metabolism, however atorvastatin, apparently, is not exposed to enterohepatic recirculation. Average elimination half-life of the atorvastatin makes about 14 hours, elimination half-life of active metabolites makes 20-30 hours. Less than 2% of the accepted oral dose of an atorvastatin are removed with urine.
A pharmacodynamics
Atorvastatin – a selection, competitive inhibitor of HMG-CoA reductase – the key enzyme turning 3-hydroxy-3-metilglyutarilkoenzim A into mevalonovy acid – the predecessor of sterols, including cholesterol.
Atorvastatin reduces the level of the general cholesterol, LDL-cholesterol and ap at patients with a homozygous and heterozygous family hypercholesterolemia with single forms of a hypercholesterolemia and about mixed by a dislipidemiya. Atorvastatin also reduces the level of lipoproteids of very low density – cholesterol (LPONP-H) and triglycerides, restores non-constant increase in the LPONP-H level and A-1 apolipoprotein. Also reduces the level of lipoproteids of intermediate density – cholesterol (LPPP-H) at patients with a disbetalipoproteinemiya.

A route of administration and doses
the Recommended dose makes 10–20 mg once a day. Range of doses – from 10 to 80 mg once in day.
At primary hypercholesterolemia (heterozygous family and single) and the combined (mixed) dislipidemiya dose makes 10 mg of 1 times a day.
At a homozygous family hypercholesterolemia the initial dose makes 10 mg of 1 times a day.
The effect is shown within 2 weeks, the maximum effect is observed within 4 weeks. In an initiation of treatment and/or during increase in a dose of an atokor it is necessary to control each 2 – 4 weeks the level of lipids in plasma and to korrigirovat a dose.
It is necessary to change a dose with an interval not less than 4 weeks. Atokor it is possible to appoint at any time, with food or on an empty stomach. To the patient appoint a standard hypocholesteric diet, actions for decrease in excess weight and physical exercises both prior to therapy atorvastatiny, and during treatment.

Side effects
– constipations, an abdominal distension, dyspepsia, an abdominal pain, nausea, a gastroenteritis, colitis, vomiting, gastritis, dryness in a mouth, rectal bleeding, an esophagitis, an eructation, a glossitis, an oral cavity ulceration, lack of appetite, increase in appetite, stomatitis, pains in a gall bladder, exacerbation of a peptic ulcer of a duodenum, a dysphagy, enteritis, a tar-like chair, bleeding of gums, stomach ulcer, tenesmus, a stomacace, hepatitis, pancreatitis, cholestatic jaundice
– bronchitis, rhinitis, pneumonia, short wind, asthma, nasal bleeding
– insomnia, dizziness, paresthesia, drowsiness, amnesia, disturbing dreams, decrease in a libido, emotional instability, a lack of coordination, peripheral neuropathy, a wryneck, paralysis of the person, a hyperkinesia, a depression, a giposteziya, hypotonia
– arthritis, spasms in the lower extremities, a bursitis, a tendovaginitis, a myasthenia, a contracture of muscles, a miositis
– the itching, contact dermatitis, baldness, xeroderma, the increased perspiration, an urtikariya, a small tortoiseshell, eczema, seborrhea, skin ulcers
– an infection of an uric path, frequent urination, cystitis, a hamaturia, impotence, a dysuria, concrements in kidneys, a nocturia, an epididymite, fibrous and cystous mastopathy, vaginal bleeding, an albuminuria, a thorax hypertrophy, acyclic uterine bleeding, nephrite, urine incontinence, an ischuria, desires on urination, a premature ejaculation, uterine bleeding
– an amblyopia, a ring in ears, xerophthalmus, disturbance of a refraction, bleeding in an eye, deafness, glaucoma, a parosmiya, loss of taste, a food faddism
– heartbeat, a vazodilatation, a faint, migraine, orthostatic hypotonia, phlebitis, arrhythmia, stenocardia, a hypertension
– peripheral swelled, a hyperglycemia, increase in level creatinine phosphokinase, gout, increase in body weight, a hypoglycemia
– bruises, anemia, a hyperadenosis, thrombocytopenia, petekhialny hemorrhage
– a stethalgia, a face edema, fever, muscle tension of a neck, orientation disturbance, the increased reaction of photosensitivity, generalized swelled, an anaphylaxis, a Quincke’s disease, bubble rash (including a multiformny erythema, a syndrome Stephens-Johnson and toxic epidermal necrosis) and acute necrosis of skeletal muscles.

Contraindications
– hypersensitivity to any of drug components
– an acute hepatitis
– chronic active hepatitis
– cirrhosis of any etiology
– increase in activity of hepatic transaminases in serum
– pregnancy or a lactation
– children up to 18 years.

Special instructions
before therapy atorvastatiny it is necessary to exclude the reasons of a secondary hypercholesterolemia (for example, insufficient treatment of diabetes, a hypothyroidism, a nephrotic syndrome, disproteinemias, obstructive diseases of a liver, intake of other medicines and alcoholism) and also to define lipidic structure – the level of the general cholesterol, cholesterol/LDL, cholesterol/LPVP and triglycerides.
Use in pediatrics: there are no data on use in children’s practice.
Patients of advanced age: Plasma concentration of an atorvastatin increase approximately by 40% at patients of advanced age (65 years are more senior).
Renal failure: Diseases of kidneys do not affect plasma concentration of an atorvastatin or decrease in cholesterol/LDL therefore selection of a dose is not required. It was reported about development of a rhabdomyolysis and acute renal failure owing to a myoglobinuria at administration of drugs of this group. Therefore atorvastatin it is necessary to cancel or interrupt temporarily treatment at patients with serious acute conditions at suspicion on a myopathy and also patients have risk groups at which the renal failure owing to a rhabdomyolysis can develop.
Liver diseases: Atorvastatin the patients abusing alcohol and/or to patients with presence of diseases of a liver in the anamnesis should appoint with care.
Inhibitors of HMG-CoA reductase can cause biochemical abnormal liver functions. Therefore it is necessary to carry out the assessment of function of a liver prior to therapy and in 12 weeks after the beginning of therapy or increase in a dose, then once in half a year. At patients with liver diseases against the background of alcoholism the plasma concentration of an atorvastatin considerably increase.
Pregnancy and the period of a lactation
It is contraindicated.
Influence on ability to control of motor transport or work with mechanisms
Drug can cause dizziness and drowsiness therefore during treatment the patients should not run vehicles or moving mechanisms.

Overdose
Strengthening of action of side effects. Carry out gastric lavage, appoint activated carbon, depletive. At development of a myopathy with the subsequent rhabdomyolysis and an acute renal failure drug should be cancelled immediately. Administration of diuretic and solution of Natrii hydrocarbonas is shown. The rhabdomyolysis can lead to a hyperpotassemia which elimination requires intravenous administration of Calcii chloridum or calcium of a gluconate, infusion of glucose with insulin.
As atorvastatin substantially contacts proteins of blood plasma, the hemodialysis is ineffective.

Form of release and packing
of the Tablet, film coated 10 mg and 20 mg No. 10. Primary packing – blisters from PVC and aluminum foil, secondary – cardboard boxes.

To Store storage conditions at a temperature up to +25 °C, in the place protected from light and moisture. To store in the places inaccessible for children!

For additional information contact in Representative office of Firm
the address: 050000 Almaty,