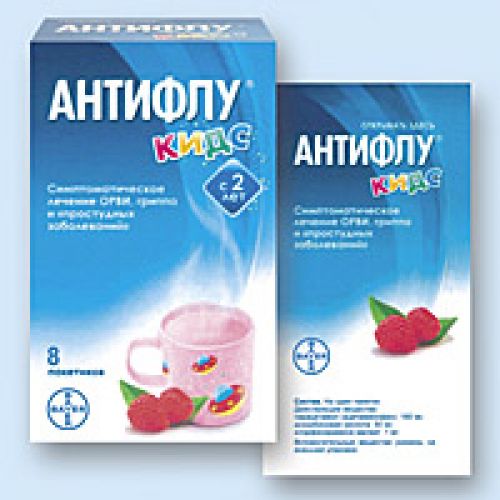 of Kids Torgovoye Antiflu® medicine a name
of Antiflu® Kids

The description
the loose powder, White with insignificant shades, including crystalline particles with a light crimson aroma.

The pharmacotherapeutic
Paracetamol group in a combination with other drugs (excepting psikholeptik).
The code of automatic telephone exchange N02BE51

Pharmacokinetics Acetaminophen properties (paracetamol) is soaked up in upper parts of intestines by passive diffusion, elimination half-life (T ½) acetaminophen makes 2-2.5 hours. It is extended after reception of high doses and at persons with liver diseases. Acetaminophen with urine is removed (85% of a single dose of acetaminophen are removed within 24 hours).
Chlorpheniramine the maleate is soaked up in thin department of intestines, is exposed to biotransformation in a liver. Time of semi-elimination is 8 hours. Products of metabolism and a nemetabolizirovanny part of drug it is removed with urine.
Ascorbic acid is actively soaked up in thin department of intestines. The maximum concentration in plasma after intake is reached in 4 hours. From plasma easily gets into leukocytes, thrombocytes and practically into all fabrics. Elimination of ascorbic acid happens as by its excretion in not changed view with urine, and by biotransformation in the dezoksiaskorbinovy and diketogulonic acids (the last turns into oxalic acid) removed with urine.
The pharmacodynamics
Acetaminophen (paracetamol) renders analgetic, febrifugal and mild anti-inflammatory action due to influence on the center of thermal control and inhibition of synthesis of prostaglandins in the central nervous system.
Chlorpheniramine a maleate – blocker H1-gistaminoretseptorov, interferes with action of one of the main mediators of inflammation – a histamine.
Reducing permeability of walls of capillaries, reduces expressiveness of local exudative manifestations, puffiness of mucous membranes of a nose, nasopharynx, upper airways, dacryagogue.
Ascorbic acid (Vitamin C) has antioxidant properties, activates protective mechanisms, increases body resistance to an infection. Activates oxidation-reduction processes, stimulates regeneration processes, synthesis of glucocorticoids and catecholamines, condenses a wall of capillaries (due to increase in formation of intercellular substance and decrease of the activity of hyaluronidase).
Antiflu® Kids reduces head, musculoarticulate pain, a sore throat, eliminates a rhinorrhea, an itching of eyes and a nose.

Indications
For elimination of symptoms of a SARS, flu and cold:
– the increased body temperature, a fever
– congestion of a nose, sneezing
– dacryagogue
– head and musculoarticulate pain
– a sore throat and other symptoms of inflammation of upper airways and adnexal bosoms.

To Accept a route of administration and doses inside. Before reception, contents of one package to dissolve in 150 ml of warm water. The single dose for children of 2-6 years makes contents of 1 bag, for children of 6-12 years – contents of 2 bags. If necessary to repeat reception each 4-6 hours, but no more than 4 the dosed Course of treatment of 5 days. Further use is possible only under observation of the doctor.

of the Contraindication
– the increased individual sensitivity to drug components
– the profound abnormal liver functions and/or kidneys are possible.
– to children up to 2 years

Medicinal interactions
Acetaminophen slows down removal of antibiotics from an organism. Gepato- and nephrotoxicity of acetaminophen amplifies at combination with barbiturates, alcohol.
Tetracyclines increase risk of developing anemia and methemoglobinemia at acetaminophen use.
Simultaneous use of hypnotic drugs and sedatives, neuroleptics, tranquilizers, alcohol significantly strengthens the oppressing maleate chlorpheniramine influence on the central nervous system.

The special
instructions Considering the ability of drug to cause drowsiness, follows within 4 hours after reception to keep children from the occupations demanding the increased concentration of attention.

Overdose
Symptoms: excitement, dizziness, sleep disorder, nausea, vomiting.
Symptomatic treatment. At overdose of this or any other medicine it is necessary to ask for medical care.

The form of release and packing
hermetically pack Powder into a bag from the laminated material (paper/polyethylene / foil/polyethylene). On 5 bags together with the instruction for medical use in the state and Russian languages in cardboard packing.

The name and the country
of the Contract Pharmakal Corporation manufacturing organization,
135 Adams Avenue, Hopog, New York 11788, the USA

the Name and the country of the owner of the registration certificate
of Bayer Konsyyumer Ker AG, Switzerland

the Address of the organization accepting in the territory of the Republic of Kazakhstan claims from consumers on quality of a product (goods):
Bayer of KAZ LLP 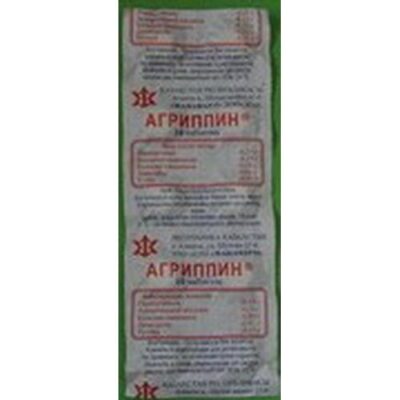