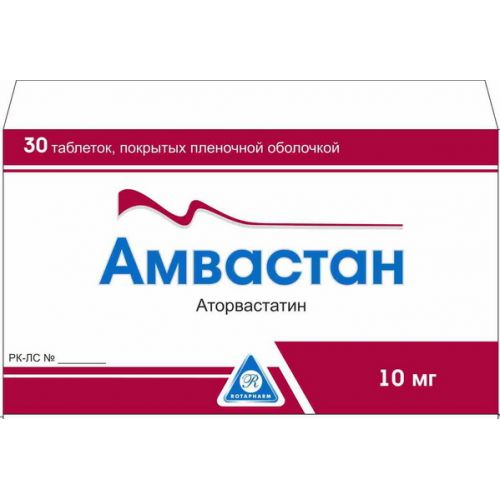 Dosage of 20 mg: tablets of white color, film coated,
round, with a biconvex surface, with risky on one party.

Dosage of 40 and 80 mg: tablets of white color, film coated,
oblong, with a biconvex surface, with risky on one party.

Can lead the special indications Use of Inhibitors of GMG-KoA-reduktazy for decrease in level of lipids in blood to change of the biochemical indicators reflecting function of a liver. Function of a liver should be controlled before therapy, in 6 and 12 weeks after the beginning of reception of an atorvastatin, after each increase in a dose and also periodically, for example, each 6 months.
With care it is necessary to appoint drug in liver diseases in the anamnesis, heavy disturbances of electrolytic balance, endocrine and metabolic disturbances, an alcoholism, arterial hypotension,
heavy acute infections (sepsis), uncontrollable epilepsy, extensive surgical interventions, injuries, diseases of skeletal muscles. At use of an atorvastatin, as well as other means of this class, rhabdomyolysis cases with the acute renal failure caused by a myoglobinuria are described. Therapy by drug should be stopped temporarily or to cancel completely at emergence of signs of a possible myopathy or presence of risk factor of developing a renal failure against the background of a rhabdomyolysis (for example, a heavy acute infection, arterial hypotension, serious operation, an injury, heavy exchange, endocrine and electrolytic disturbances and uncontrollable spasms).
Patients need to be warned that treatment atorvastatiny can cause a myopathy. The diagnosis of a myopathy (pain and weakness in muscles in combination with increase in activity of a kreatinfosfoki-naza (KFK) more than by 10 times in comparison with the upper bound of norm) should be assumed at patients with widespread myalgias, morbidity or weakness of muscles and/or the significant increase in activity of KFK. Patients need to be warned that they should report immediately to the doctor about appearance of inexplicable pains or weakness in muscles if they are followed by an indisposition or fever. Therapy atorvastatiny it is necessary to stop in case of the significant increase in activity KFK or in the presence of the confirmed or expected myopathy. The risk of a myopathy at treatment by other drugs of this class increased at simultaneous use of cyclosporine, fibrat, erythromycin, niacin or azolny antifungal means. Appointing atorvastatin in a combination with these means in hypolipidemic doses, it is necessary to weigh carefully expected advantage and risk of treatment, to regularly observe patients for the purpose of detection of pains or weakness in muscles, especially within the first months of treatment and during the periods of increase in a dose of any drug. In similar situations it is possible to recommend periodic determination of activity of KFK though such control does not allow to prevent development of a heavy myopathy.
Use in pediatrics
the Clinical data on efficiency and safety of use of drug for children are absent. Atorvastatin can be appointed to children only the specialist doctor. Experience of use of an atorvastatin for treatment of children is limited only to small population of patients (age of 10-17 years) suffering from some forms of a heavy dislipidemiya. The recommended initial daily dose of drug for treatment of a heterozygous family hypercholesterolemia makes 10 mg, depending on efficiency and tolerance of drug it can be increased up to 80 mg a day. The subsequent observation of development of these children was not carried out.
Pregnancy
of the Woman of reproductive age during treatment have to use appropriate means of contraception. Atorvastatin it is possible to apply at women of reproductive age only if pregnancy probability very low, the patient has to be informed on possible risk for a fruit at treatment atorvastatiny.
Features of influence of medicine on ability to run the vehicle or potentially dangerous mekhanizmamiuchityvy side effects of drug, it is necessary to be careful at control of motor transport.
Overdose
Symptoms: strengthening of side effects is possible.
Treatment: symptomatic therapy, there is no specific antidote. The hemodialysis is inefficient.
Form of release and packing
of the Tablet, film coated, 10 mg, 20 mg, 40 mg, 80 mg.
On 10 tablets in blister strip packaging from a film of polyvinylchloride and printing aluminum foil.
On 3 planimetric packs together with the instruction for use in the state and Russian languages put in a box of cardboard.

3 years
not to apply a period of storage after an expiration date.
Prescription status
According to the prescription
the Producer
the Owner of a trademark and the certificate of registration is the ROTAFARM company, GREAT BRITAIN. (‘ROTAPHARM’, GREAT BRITAIN).
Made Biofarm Ilach Sang. ve Tidzh A.Sh.
(Akpynar Makhallesi Fatih Dzhaddesi, No.: 17, 34885 Samandyra – to Sandzhaktepa – Istanbul / Turkey). ‘Biofarma Us San. ve Tic. A.§.’ (Akpinar Man. Fatih Cad. No: 17, 34885 Samandira – Sancaktepe – Istanbul/Turkey).
The owner of the registration certificate
Rotafarm, Great Britain