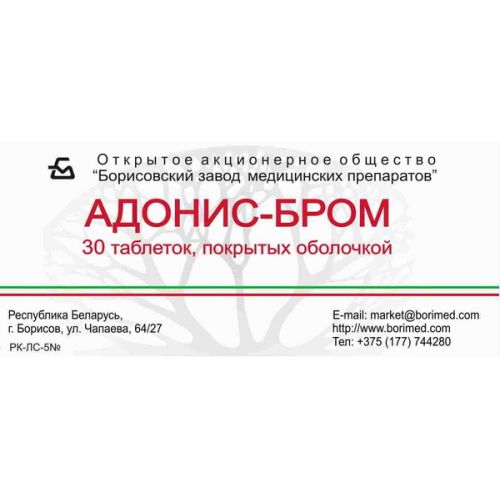 the Trade name
the Adonis bromine

the Description
of the Tablet, coated, yellow color, with a biconvex surface.
On cross section two layers are visible.

In an organism tsimarin and bromide ions are distributed evenly, generally in extracellular liquid. In cerebrospinal fluid of concentration bromide ion and a tsimarina make 37% of their concentration in plasma. Bromide ions are not exposed to metabolism, tsimarin it biotransformirutsya partially in a liver and a wall of intestines. Elimination bromide ions and a tsimarina is carried out generally by kidneys. Bromide ions is removed by glomerular filtration, but in the subsequent are exposed to a canalicular reabsorption, competing about chloride ions. The semi-elimination period bromide ions averages 11.9± 1.4 days and depends on level of consumption of salt (it is shortened at increase in consumption of sodium of chloride). Additional ways of elimination bromide ions are intestines, sweat and mammary glands.
Tsimarin eliminirutsya in the form of metabolites and not changed substance (about 21% of the entered dose). The coefficient of daily elimination makes 50%. Semi-elimination period about 13-23 h.
The pharmacodynamics
Medicine of plant origin, has weak sedative and cardiotonic effect.
Action the adonis bromine is caused being a part of extract of the adonis (an adonis spring) polar glycosides of a tsimarin (1-10% of total number of glycosides) and an adonitoksin (3-20% of total number of glycosides) and also bromide ions. Bromide ions stabilize the GAMKA-chloric channel of a receptor, after interaction with γ-aminobutyric acid, providing receipt bromide – both chloride ions in a cell and decrease of the activity of neurons. Tsimarin interacts with the neurosteroid distinguishing site GAMKA-retseptora and increases its sensitivity to effect of γ-aminobutyric acid. In a membrane of a neuron and myocardium tsimarin blocks Na+/K+-ATFaza’s work that interferes with removal of ions of sodium from a cell. Increase in intracellular sodium breaks process of removal of calcium of a cell and increases sokratitelny activity of a myocardium. The adonis bromine has weak cardiotonic effect, mainly, at the expense of a systolic component: increases force of warm reductions (positive inotropic effect), excitability of a myocardium (positive bathmotropic effect). Diastolic action is significant much more weakly and is characterized by decrease in heart rate (negative chronotropic effect) and carrying out impulses on a myocardium (negative dromotropic effect). The adonis bromine concentrates and strengthens processes of braking in a cerebral cortex. Restores balance between processes of excitement and braking in the central nervous system.

Indications
as a part of complex therapy
– initial forms of chronic heart failure (class I on NYHA)
– a neurasthenia, neurosises, hysteria
– acrimony, insomnia against the background of intensive physical
activities and stresses
– vegeto-vascular dystonia

Appoint the Route of administration and doses inside on 1 tablet 3 times a day. The course of treatment is defined by the attending physician.
In a renal failure with decrease in clearance of creatinine more than it is recommended to reduce a single dose by 50% of normal indicators twice or to increase an interval between intake of medicine till 12 o’clock.

of the Contraindication
– hypersensitivity to the adonis, bromides
– a depression
– respiratory insufficiency
– chronic heart failure (the II-IV class on NYHA)
– severe forms of a liver and renal failure
– an erosion, stomach ulcer and a duodenum
– intake of cardiac glycosides
– digitalis intoxication
– a hypercalcemia, a hypopotassemia
– bradycardia, atrioventricular block of various degree or a ventricular form of arrhythmia, Adams-Stokes-Morganti’s syndrome
– stenocardia, a myocardial infarction

Medicinal interactions
At simultaneous use strengthening of toxic effect of other cardiac glycosides (drugs of a foxglove, Strophanthus and lily of the valley) is possible.
At simultaneous use enhances effect and toxic action of antiarrhythmic means of the class IA (quinidine, procaineamide, Disopyramidum), drugs of calcium, depletive and glucocorticosteroids.
Strengthens the oppressing impact on central nervous system of derivatives of benzodiazepine, anticonvulsant and sedative and hypnotic means, neuroleptics and alcohol. Galotanovy anesthesia increases level bromide ions in an organism at the patients accepting the Adonis bromine and enhances its effect and toxic action.
Intake of salty food leads to increase in excretion of bromides with urine and weakens effect of drug.

Special instructions
It is necessary to keep to a hyposalt diet (to limit sodium chloride consumption) during treatment the Adonis bromine.
Use in pediatrics. Safety and efficiency of use of medicine for children is not established. Use of drug at children’s age is not recommended.
Pregnancy and the period of a lactation
Bromide ions easily get through a placenta and are allocated in breast milk. Use the Adonis bromine during pregnancy perhaps only if the expected advantage exceeds possible risk for a fruit. In need of appointment the Adonis bromine in the period of a lactation it is necessary to stop chest feeding of the child from a breast for the entire period of treatment and within 1 month after its termination.
Features of influence of medicine on ability to run the vehicle or potentially dangerous mechanisms
Reception the Adonis bromine breaks ability of the patient to control of the vehicle or other operator activity.

Overdose
Symptoms: the profound bradycardia, polytopic premature ventricular contraction, a bigeminal pulse or a trigeminy, delay of atrioventricular conductivity, in hard cases – trembling of ventricles, cardiac arrest.
Treatment: in intoxication connected with overdose by cardiac glycosides take a break in medicine use, if necessary appoint drugs of potassium and antiarrhytmic drugs.
Use of diuretics for creation of an artificial diuresis and acceleration of removal bromide ions contraindicated since at the same time the risk of toxic action of glycosides of the adonis increases.

Storage conditions
In the dry, protected from light place, at a temperature not above 25ºС.
To store out of children’s reach!

to Develop the Address of the organization accepting in the territory of the Republic of Kazakhstan claims from consumers on quality of products (goods) “Borisovsky Plant of Medications” Open joint stock company, Republic of Belarus, Minsk Region, Borisov, Chapayev St., 64/27, ph. / fax 8-(10375177) 744280, the e-mail address of market@borimed.com