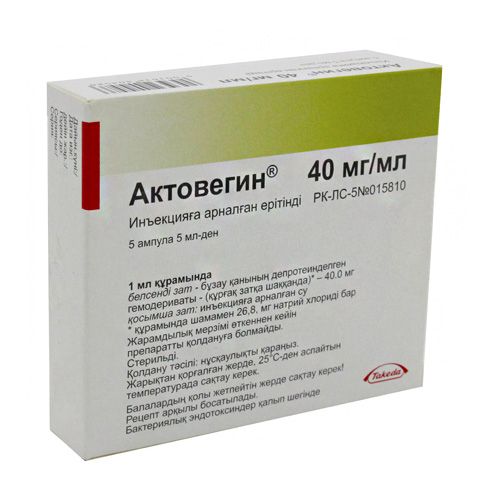 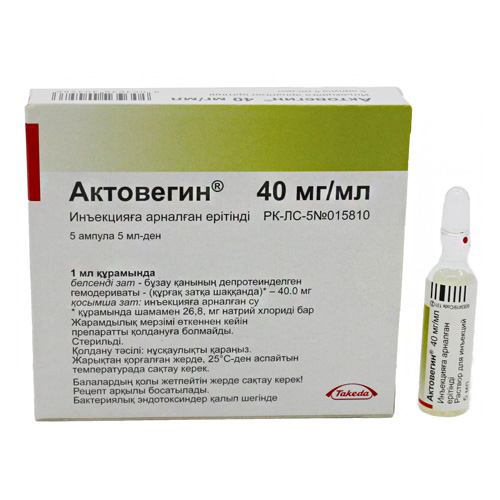 It is impossible to study the pharmacokinetic characteristics (absorption, distribution, excretion) of Actovegin, since it consists only of physiological components that are usually present in the body.

Actovegin is a gemoderivate, which is obtained by dialysis and ultrafiltration (compounds with a molecular weight of less than 5000 daltons pass). Actovegin is an antihypoxant that has three types of effects: metabolic, neuroprotective and microcirculatory. Actovegin increases the uptake and utilization of oxygen; the phospho-oligosaccharides included in the preparation inositol have a positive effect on the transport and utilization of glucose, which leads to an improvement in the energy metabolism of cells and a decrease in the formation of lactate in conditions of ischemia. The activity of Actovegin was confirmed by measuring increased absorption and increased utilization of glucose and oxygen.

Several ways of implementing the neuroprotective mechanism of drug action are considered.

Actovegin prevents the development of apoptosis induced by the beta-amyloid peptide (Aβ25-35).

Actovegin modulates the activity of nuclear factor kappa B (NF-kB), which plays an important role in the regulation of apoptosis and inflammation in the central and peripheral nervous system.

Another mechanism of action is associated with the nuclear enzyme poly (ADP-ribose) polymerase (PARP). PARP plays an important role in the detection and repair of single-stranded DNA damage, but excessive activation of the enzyme can trigger cell death in conditions such as cerebrovascular disease and diabetic polyneuropathy. Actovegin inhibits the activity of PARP, which leads to a functional and morphological improvement in the state of the central and peripheral nervous system. The positive effects of the drug Actovegin, affecting the processes of microcirculation and the endothelium, are an increase in the rate of capillary blood flow, a decrease in the pericapillary zone, a decrease in the myogenic tone of precapillary arterioles and capillary sphincters,

In the course of various studies, it was found that the effect of the drug Actovegin occurs no later than 30 minutes after its administration. The maximum effect is observed 3 hours after parenteral and 2-6 hours after oral administration.

The effect of Actovegin on oxygen uptake and utilization, as well as insulin-like activity with stimulation of glucose transport and oxidation, are significant in the treatment of diabetic polyneuropathy (DPN).

As part of complex therapy:

– symptomatic treatment of peripheral circulatory disorders and their consequences.

Actovegin, solution for injection, is used intramuscularly, intravenously (including in the form of infusions) or intra-arterially.

Instructions for using ampoules with one break point:

Depending on the severity of the clinical picture, at first, 10-20 ml of the drug should be administered intravenously or intra-arterially daily; for further treatment, 5 ml intravenously or intramuscularly slowly, daily or several times a week. For infusion administration, from 10 to 50 ml of the drug should be added to 200-300 ml of the stock solution (isotonic sodium chloride solution or 5% glucose solution). The infusion rate is about 2 ml/min.

For intramuscular injections, no more than 5 ml of the drug is used, which should be administered slowly, since the solution is hypertonic.

In the acute period of ischemic stroke, starting from 5-7 days, 2000 mg per day intravenously, up to 20 infusions with the transition to a tablet form, 2 tablets 3 times a day (1200 mg / day). The total duration of treatment is 6 months.

Peripheral circulatory disorders and their consequences

800 – 2000 mg per day intra-arterially or intravenously drip. The duration of treatment is up to 4 weeks.

– hypersensitivity to the components of the drug Actovegin

Parenteral administration of the drug should be carried out under sterile conditions.

Due to the possibility of an anaphylactic reaction, a test injection (hypersensitivity test) is recommended.

In the case of electrolyte disorders (such as hyperchloremia and hypernatremia), these conditions should be adjusted accordingly.

The solution for injection has a slightly yellowish tint. The color intensity may vary from one batch to another depending on the characteristics of the starting materials used, but this does not adversely affect the activity of the drug or its tolerability.

Do not use a solution that is opaque or contains particles.

After opening the ampoule, the solution cannot be stored.

In the ARTEMIDA multicenter, randomized, double-blind, placebo-controlled study (NCT01582854), which aimed to study the therapeutic effect of Actovegin on cognitive impairment in 503 patients with ischemic stroke, the overall incidence of serious adverse events and death was the same in both treatment groups. Although the frequency of recurrent ischemic strokes was within the expected range in this patient population, there were more cases in the Actovegin group than in the placebo group, but this difference was not statistically significant. An association between recurrent stroke events and study drug was not established.

Use in pediatric patients

Currently, data on the use of the drug Actovegin in children are not available, so its use in this group of people is not recommended.

Influence on the ability to drive a car and other mechanisms

Actovegin should only be used when the therapeutic benefit outweighs the potential risk to the fetus or child.

There is no data on the possibility of overdose with Actovegin. Based on pharmacological data, no additional undesirable effects are expected.

Store in a place protected from light at a temperature not exceeding 25C.

Do not use the drug after the expiration date 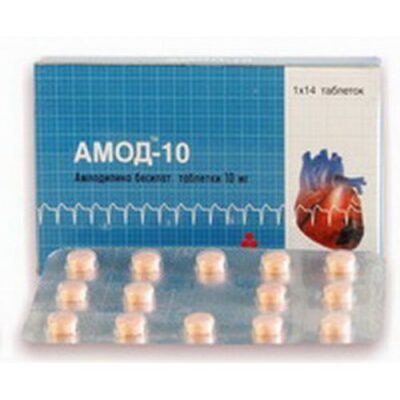