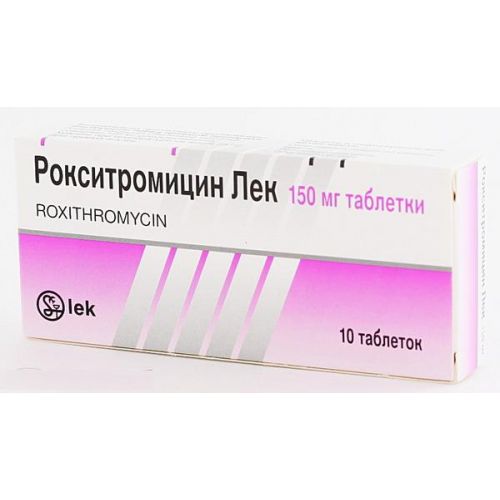 Pharmacokinetics Roksitromitsin properties is quickly soaked up, the maximum concentration make 6 – 8 mkg/ml and are reached 2 hours later after intake of a dose of 150 mg. Roksitromitsin well gets into fabrics (lungs, tonsils, a prostate), liquids of an organism and in macrophages. It undergoes partial metabolism in a liver, the main part is removed with excrements (about 50%) in not changed look and partially in the form of metabolites, up to 12% is removed by kidneys and up to 15% – lungs. After intake of a dose of a roksitromitsin of 2.5 mg/kg its serumal concentration remain at the level above MIK within 12 and more hours.

Long elimination half-life allows to increase an interval between receptions and to reduce frequency rate of reception (1-2) within a day.

Roksitromitsin is a semi-synthetic antibiotic and belongs to group of makrolidny antibiotics.

Roksitromitsin communicates with 50s a subunit of a ribosome of bacteria, causing suppression of synthesis of cellular proteins (including a bacterial wall) and a stop of activity of bacteria.

Roksitromitsin is active against the following anaerobe bacterias: Bacteroides oralis, B.melaninogenicus, B.urealyticus whereas B.fragilis is steady in relation to it. Clostridium perfringens is sensitive to a roksitromitsin whereas Clostridium difficile usually shows stability. Eubacterium, Peptococcus, Peptostreptococcus and Propionibacterium acnes are also sensitive to a roksitromitsin. Good penetration into a cell provides efficiency against Chlamidia trachomatis, Ureaplasma urealyticum, Mycoplasma pneumoniae, Rickettsio richettsii and R.conorri.

of the Infection caused by roksitromitsin-sensitive microorganisms:

– infections of skin and soft tissues

– the acute coloenteritis and system infections caused by Campilobacter jejuni

– chronic gastritis, a peptic ulcer of a stomach and 12 items k. (H. pylori)

– other infections caused by activators, sensitive to a roksitromitsin, at patients with the known hypersensitivity to antibiotics of a penicillinic row

For patients with a heavy liver failure the dose should be lowered: one tablet on 150 mg each 24 hours before food.

For patients with a heavy renal failure (the clearance of creatinine less than 0.25 ml / c) is recommended on 1 tablet on 150 mg each 24 hours before food).

It is not required from elderly people of dose adjustment.

The daily dose for children up to 12 years (with body weight not less than 30 kg) makes 5 – 10 mg/kg of body weight, divided into 2 receptions.

Duration of reception is defined by weight of infectious process and activity of the activator. The average duration of a course of treatment is 7-14 days.

Side effects are infrequent and only in rare instances demand therapy cancellation.

– nausea, vomiting, an abdominal distension, spasms, diarrhea or a constipation, loss of appetite

– is rare: skin reactions of hypersensitivity (urticaria, an itching, rash) and fervescence

– in exclusively exceptional cases: a headache, dizziness, sonitus and tachycardia

– allergic reactions of immediate type (a Quincke’s disease, a bronchospasm, it is extremely rare – an acute anaphylaxis).

· hypersensitivity to a roksitromitsin or any other component of drug

· the first trimester of pregnancy

Roksitromitsin it is not necessary to appoint Medicinal interactions along with ergotamine – the containing drugs or other alkaloids of an ergot (Secale cornutum). Ergotamine can provoke a spasm of arteries and cause heavy ischemia.

At simultaneous use with digoxin the increase in absorption of the last is possible.

When assigning macroleads (erythromycin) with terfanidiny, tsizapridy, astemizoly increase in risk of development of disturbances from a cardiovascular system was noted, up to blinking/trembling of ventricles and other ventricular arrhythmias.

Roksitromitsin and rifampicin in a combination show synergism.

patients Should show care when assigning a roksitromitsin with abnormal liver functions. To these patients it is appointed only according to accurate indications, it is necessary to carry out periodic control of function of a liver.

With care appoint to patients 65 years are more senior.

Roksitromitsin it is necessary to apply at pregnancy only according to accurate indications and under stringent medical control.

Roksitromitsin gets into breast milk therefore nursing mothers should appoint it only according to accurate indications.

is not required special precautions.

Symptoms: nausea and vomiting. In rare instances injury of a liver can be observed.

Treatment: symptomatic: lavage of gastric, specific antidote does not exist.

Roksitromitsin Lek of a tablet of 150 mg, film coated, are issued in blisters on 10 tablets, together with the instruction for use in a cardboard pack.

To Store storage conditions at a temperature not above 25 °C.

The PERIOD OF STORAGE

it is not necessary to use Drug after the expiry date specified on packing.

The Lek of of. Producer,