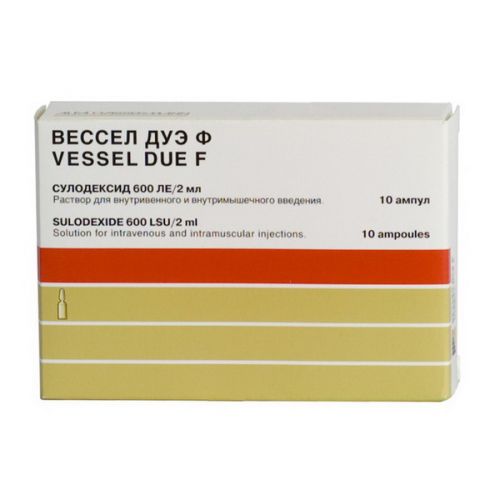 Vessel Due F LE 600 10s solution for injection in ampoules

Trade name
of Wessel Due F

the Description
Transparent solution from light yellow till yellow color.

Sulodeksid’s Pharmacokinetics of 90% properties collects in an endothelium of vessels that exceeds its concentration in fabrics of other bodies at 20-30 times. It is metabolized in a liver and allocated through kidneys. Distribution of a sulodeksid on bodies showed that drug undergoes extracellular diffusion in a liver and kidneys in 4 hours after introduction.
In 24 hours after intravenous administration of drug the excretion with urine is 50% of connection, and in 48 hours – 67%.

Wessel Due’s pharmacodynamics F possesses antitrombotichesky, anti-coagulative (at parenteral administration), angioprotektivny and pro-fibrinolytic actions.
Wessel Due F (sulodeksid) is the natural product extracted and allocated from a mucous membrane of a small intestine of a pig. Represents natural mix of glucosaminoglycans (EIDERS): geparinopodobny fraction with a molecular weight of 8,000 dalton (80%) and the dermatansulfat (20%).
The mechanism of action of a sulodeksid is caused by two main properties: the high-speed geparinopodobny fraction has affinity to antithrombin III (ATIII) and dermatanovy – to a cofactor of heparin II (KGII).
The mechanism of antitrombotichesky action of Wessel Due F is connected with suppression of the factor activated Ha, with strengthening of synthesis and secretion of prostacyclin (I2 prostaglandin), with decrease in level of fibrinogen in blood plasma.
The mechanism of pro-fibrinolytic action of Wessel Due F is caused by increase in blood of level of the fabric plasminogen activator (FPA) in blood and decrease in content of its inhibitor (TAPAS).
The mechanism of angioprotektivny action of Wessel Due F is connected with recovery of structural and functional integrity of cells of an endothelium of vessels, restoration of normal density of negative electric charge of a time of a basal membrane of vessels. Drug normalizes rheological properties of blood due to decrease in level of the triglycerides (as stimulates lipolytic enzyme – the lipoproteinlipase hydrolyzing triglycerides) which are a part of LDL (lipoproteins of low density).
The efficiency of use of drug at a diabetic nephropathy is defined by ability of a sulodeksid to reduce thickness of a basal membrane and products of an extracellular matrix due to decrease in proliferation of cells of mesangium.
Anti-coagulative action of Wessel Due F is shown due to affinity to antithrombin III and a cofactor of the II heparin which inactivates thrombin.

Indications
– angiopatiya with the increased risk of a thrombogenesis including after the postponed myocardial infarction
– disturbance of cerebral circulation, including an acute period of an ischemic stroke and the period of early restoration, the distsirkulyatorny encephalopathy caused by atherosclerosis, diabetes, arterial hypertension, vascular dementia
– occlusal damages of peripheral arteries of both atherosclerotic, and diabetic genesis
– flebopatiya, a deep vein thrombosis
– a mikroangiopatiya (nephropathy, a retinopathy, neuropathy) and a macrovascular disease in diabetes (syndrome of diabetic foot, encephalopathy, a cardiopathy)
– trombotichesky states, an anti-phospholipidic syndrome (appoint along with acetylsalicylic acid after treatment by low-molecular heparin)

the Route of administration and doses
Solution for injections is entered intramusculary or intravenously.
Treatment is begun with daily intramuscular introduction of contents of 1 ampoule (2 ml) either intravenously bolyusno or by drop infusion (in 150 – 200 ml of normal saline solution).
The maximum dose of 4 ml (2 ampoules) in day (on 2 ml twice a day) is entered intramusculary or intravenously. The course of treatment makes 15-20 days. Further continue treatment by reception of capsules within 30-40 days. It is necessary to repeat a full course of treatment not less than 2 times a year.

Side effects
– nausea, vomiting, pains in epigastriums
– skin rash (allergic reaction)
– pain, burning, a hematoma in the place of an injection

Medicinal interactions
of Significant interaction of drug of Wessel Due F with other drugs it is not established. At Wessel Due’s use F it is not recommended to use at the same time the drugs influencing the system of a hemostasis as anticoagulants (direct and indirect).
Special instructions
At use of the recommended doses the control of parameters of coagulation is not obligatory. Use of high doses at parenteral administration demands control of coagulation at the beginning and at the end of treatment.
It is reasonable to define indicators:
– AChTV-the activated partial tromboplastinovy time, is normal: 30-40 sec. (there can be 25-30 sec. or 35-50 sec. that depends on a look and concentration of the used activator). Wessel Due F increases normal indicators, approximately, by one and a half times.
– antithrombin III – physiological anticoagulant, normal has values of 210-300 mg/l. The bleeding time – an indicator of a vascular and platelet hemostasis, is normal according to Duca – 2-4 min.
– coagulation time (not stabilized blood), it is normal of 6-8 min. by the Miliana method (fashion. Moravitsa).
Use in pediatrics
safety Given on study and efficiency of drug at children and teenagers up to 18 years are absent.
Pregnancy and a lactation
Is available positive experience of use of drug of Wessel Due by F patients with achrestic diabetes in II and III trimesters of pregnancy for the purpose of treatment and prevention of vascular complications (a gestosis * – late toxicosis of pregnant women).
* – the gestoses arising against the background of: a nephropathy of I and II degree, a hypertension and the IDCS on hypertensive type, a chronic glomerulonephritis, thrombophlebitis and risk of tromboembolic episodes, a pregnancy miscarriage at an anti-phospholipidic syndrome, the raised blood clotting indicators in various options of pathologies.
Features of influence of medicine on ability to run the vehicle or potentially dangerous mechanisms
drug does not affect ability to driving of the car and control of the machine equipment.

A form of release and packing
Solution for injections on 2 ml in ampoules. On 10 ampoules in planimetric strip packaging together with the instruction for medical use in the state and Russian languages put in a pack from cardboard.

Producer
S. Alpha Wassermann of the item. And
Via Enrico Fermi, 1, 65020 of Alanno (Pescara), Milan – Italy