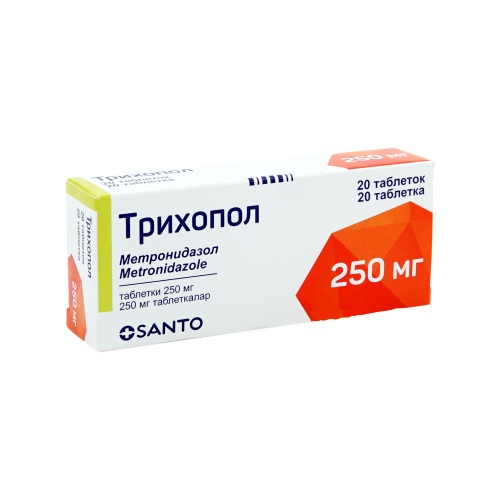 Metronidazole is readily absorbed from the gastrointestinal tract (minimum 80%). Only in small quantities is absorbed by intravaginal administration.

mcg/ml. The presence of food reduces the rate of absorption and reduces the maximum concentration of metronidazole in the blood serum.

Metronidazole is widely distributed in tissues and body fluids, including bile, bones, saliva, peritoneal fluid, vaginal secretions, seminal fluid, cerebrospinal fluid, brain and liver tissues. It also penetrates the placental barrier and is excreted in breast milk at a concentration comparable to the level of the drug in the blood plasma.

Approximately 30-60% of oral metronidazole is biotransformed in the liver by hydroxylation, oxidation and conjugation with glucuronic acid.

The main metabolite 2-hydroxymetanidazole also has antibacterial and antiprotozoal activity.

Metronidazole and its metabolites are excreted mainly through the kidneys 60-80%. Only 6-15% of metronidazole is excreted in the feces. Renal clearance is 10-10.2 ml/min. Urine may be dark or red-brown in color due to the presence of water-soluble dyes, which are biotransformation products of the drug.

Few studies indicate that the renal excretion of metronidazole is reduced in elderly patients.

Metronidazole can be removed from the body by hemodialysis, while peritoneal dialysis is ineffective.

Trichopol is a derivative of 5-nitroimidazole, which has antiprotozoal and antibacterial action.

Trichopolum easily penetrates into protozoa and bacteria. The oxidoreduction potential of Trichopolum is less than that of ferredoxin, a protein that transports electrons. This protein is present in anaerobic and aerobic bacteria. The potential difference leads to the reduction of the Trichopolum nitro group. Reduced form

Trichopolum inhibits the synthesis of DNA of microorganisms, which causes their death.

Trichopolum has no bactericidal action against most aerobic and partially anaerobic bacteria, fungi and viruses.

Adults and children over 12 years of age: at the beginning of treatment, 1 g (4 tablets of 250 mg) once, then 1 tablet of 250 mg 3 times a day during or after meals, until the period of immediate preparation of the patient for surgery.

Trichopol is used in monotherapy or in combination with other antibacterial agents. Usually the course of treatment does not exceed 7 days.

Adults and children over 12 years old: 1-2 tablets of 250 mg are prescribed 3 times a day during or after meals.

Be sure to treat both partners.

The drug is taken in the morning and evening, usually for 5 to 10 days. If necessary, the course of treatment can be repeated after 4-6 weeks, which is usually decided by the attending physician.

There are no specific instructions for use in children.

Elderly patients should be prescribed the drug with caution, reducing daily doses by 2 times.

Trophic ulcers of the lower extremities and bedsores

Use in patients with hepatic impairment

Use in patients with renal insufficiency

– changes in the parameters of the liver enzyme system, cholestatic hepatitis and jaundice, passing after discontinuation of the drug, liver failure (requiring liver transplantation in patients receiving metronidazole in combination with other antimicrobials)

– flattening of the T wave on the ECG

– dark staining of urine caused by the presence of highly soluble dyes in water resulting from the biotransformation of metronidazole, cystitis, polyuria, dysuria, urinary incontinence

– pain in the vagina, fungal infections

Trichopolum in combination with anticoagulants, derivatives of coumarin, prolongs prothrombin time. Therefore, the dosage of these drugs should be changed.

Drugs that activate the microsomal system of the liver, such as phenytoin and phenobarbital, accelerate the elimination of Trichopolum, which leads to a decrease in its concentration in the blood serum, and drugs that reduce the enzymatic systems of the liver (for example: cimetidine) can prolong the half-life of Trichopolum.

Trichopol belongs to inhibitors of cytochrome P450 3A4 (CYP 3A4) and, therefore, can slow down the biotransformation of drugs that are metabolized by these enzymes.

Trichopolum can cause undesirable effects on the part of the circulatory system when interacting with terfenadine and astemizole (QT prolongation on the ECG, arrhythmia).

Trichopol enhances the toxic effect of alcohol. Taking alcoholic beverages during treatment with the drug can cause unwanted reactions, such as a feeling of heat, sweating, headache, nausea, vomiting, epigastric pain.

Trichopolum reduces the clearance of 5-fluorouracil and therefore may increase its toxicity.

With the combined use of metronidazole and cyclosporine, an increase in the concentration of the latter in the blood is observed.

With the simultaneous use of metronidazole and amiodarone, prolongation of the QT interval and torsade de pointes have been reported. When they are taken simultaneously, it may be advisable to monitor the QT interval on the ECG. Patients being treated on an outpatient basis should be advised to contact their doctor if they develop symptoms that may indicate torsade de pointes, such as dizziness, palpitations, or loss of consciousness.

The simultaneous use of metronidazole can significantly increase the plasma concentration of busulfan. The mechanism of their interaction has not been described. Due to the potential risk of severe toxicity and death associated with increased plasma levels of busulfan, its concomitant use with metronidazole should be avoided.

Metronidazole may inhibit the metabolism of carbamazepine and consequently increase its plasma concentrations.

Some antibiotics in some cases can reduce the effectiveness of oral contraceptives by affecting the bacterial hydrolysis of steroid conjugates in the intestine and thus reducing the reabsorption of unconjugated steroids, resulting in a decrease in the plasma level of active steroids. This unusual interaction may occur in women with high biliary excretion of steroid conjugates. Known cases of ineffectiveness of oral contraceptives have been associated with the use of various antibiotics, including ampicillin, amoxicillin, tetracycline, and metronidazole.

Simultaneous use of metronidazole with tacrolimus can lead to an increase in the concentration of the latter in the blood. The probable mechanism for inhibition of hepatic metabolism of tacrolimus is mediated by CYP 3A4. Tacrolimus blood levels and renal function should be monitored frequently and dosages adjusted accordingly, especially after initiation of metronidazole therapy withdrawal in patients stabilized on tacrolimus regimen.

Trichopol should be used with caution in patients with central nervous system disease, with renal insufficiency.

Patients who have neurological disorders (numbness, crawling or convulsions) during the treatment period can take the drug only if the benefit of its use outweighs the possible risk of complications.

Trichopol should be used with caution in patients treated with corticosteroids and prone to edema.

Patients who have changes in the blood picture before and after treatment with Trichopolum, if necessary, re-use of Trichopolum should be under medical supervision.

During treatment, the blood picture should be monitored when using the drug for more than 10 days.

During the period of treatment with Trichopolum and at least one day after the end of therapy, alcohol should not be taken, due to the risk of developing adverse reactions.

Metronidazole is ineffective against aerobic and facultative anaerobic microorganisms.

After the use of metronidazole, candidiasis of the oral cavity, vagina and gastrointestinal tract may develop, which requires appropriate treatment.

Given the glucose content of the drug, patients with glucose-galactose malabsorption should not take this drug.

When treating trichomoniasis, it is necessary to treat both sexual partners and use condoms. Treatment does not stop during menstruation.

Metronidazole can be used no earlier than 2 weeks after the end of disulfiram.

It is necessary to stop treatment with the appearance of ataxia, dizziness, with a deterioration in the neurological status.

Since the carcinogenicity of metronidazole has been reported, long-term use of the drug requires a careful weighing of the expected benefit of continuing treatment against the possible risk.

Metronidazole is excreted in breast milk, reaching a concentration comparable to the level of the drug in the blood plasma. During breastfeeding, the drug should not be taken. If treatment is necessary, breastfeeding should be discontinued.

Given the side effect of the central nervous system, you should not drive a vehicle and work with dangerous mechanisms.

Symptoms: increased symptoms of side effects, in isolated cases, after oral administration of Trichopolum at a dose of 6-10.4 g every other day for 5-7 days, neurotoxic symptoms were observed, including convulsive conditions and peripheral neuropathy. After taking a single dose of 15 g of Trichopolum, nausea, vomiting and coordination disorder were noted.

Treatment: cancellation, gastric lavage, symptomatic therapy. There is no antidote.

Store in a dry, dark place at a temperature not exceeding 25°C. 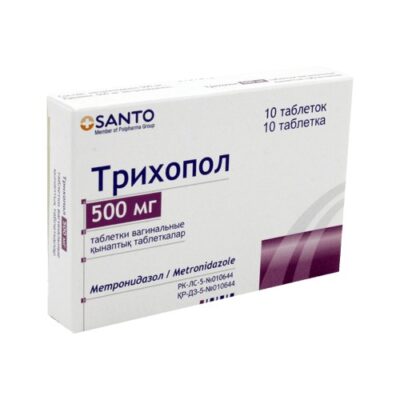