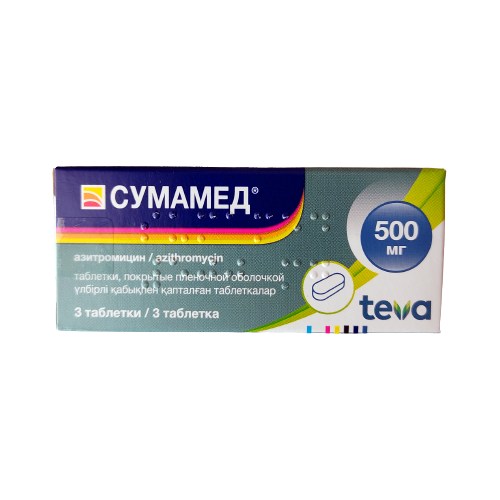 Azithromycin is rapidly absorbed when taken orally, due to its stability in an acidic environment and lipophilicity. After a single oral dose, 37% of azithromycin is absorbed, and the peak plasma concentration (0.41 µg / ml) is recorded after 2-3 hours. Vd is approximately 31 l/kg. Azithromycin penetrates well into the respiratory tract, organs and tissues of the urogenital tract, the prostate gland, into the skin and soft tissues, reaching from 1 to 9 µg / ml, depending on the type of tissue. The high tissue concentration (50 times higher than plasma concentration) and long half-life are due to the low binding of azithromycin to plasma proteins, as well as its ability to penetrate eukaryotic cells and concentrate in the low pH environment surrounding lysosomes. The ability of azithromycin to accumulate in lysosomes is especially important for the elimination of intracellular pathogens. Phagocytes deliver azithromycin to the sites of infection, where it is released during phagocytosis. But despite the high concentration in phagocytes, azithromycin does not affect their function. Therapeutic concentration remains 5-7 days after ingestion of the last dose. When taking azithromycin, a transient increase in the activity of liver enzymes is possible. Removal of half the dose from plasma is reflected in a decrease in half the dose in tissues within 2-4 days. After taking the drug in the range from 8 to 24 hours, the half-life is 14-20 hours, and after taking the drug in the range from 24 to 72 hours – 41 hours, which allows you to take Sumamed 1 time per day. The main route of excretion is with bile. Approximately 50% is excreted unchanged, the other 50% is in the form of 10 inactive metabolites. Approximately 6% of the dose taken is excreted by the kidneys.

Azithromycin is a broad-spectrum antibiotic, the first representative of a new subgroup of macrolide antibiotics – azalides. It has a bacteriostatic effect, but when high concentrations are created in the focus of inflammation, it causes a bactericidal effect. By binding the 50S ribosomal subunit, azithromycin inhibits protein synthesis in sensitive microorganisms, showing activity against most strains of gram-positive, gram-negative, anaerobic, intracellular and other microorganisms.

In most cases susceptible microorganisms

– diseases of the stomach and duodenum associated with Helicobacter pylori

– gonorrheal and non-gonorrheal urethritis and / or cervicitis

Sumamed® tablets 500 mg are taken once a day 1 hour before meals or 2 hours after meals.

With uncomplicated urethritis and / or cervicitis, a single dose of 1 g (2 tablets of 500 mg) is prescribed.

In diseases of the stomach and duodenum associated with Helicobacter pylori, Sumamed® is prescribed 1 g (2 tablets of 500 mg) per day for 3 days as part of combination therapy.

For the treatment of acne vulgaris, the following scheme is used:

500 mg daily as a single dose for 3 days, then 500 mg once a week for 9 weeks, with the dose of the second week to be taken 7 days after taking the first tablet. The next 8 doses are taken 7 days apart. The total dose is 6 g.

If you miss one dose of the drug, you should take the missed dose as soon as possible, and subsequent doses should be taken at intervals of 24 hours.

In the elderly and in patients with impaired renal function, there is no need to change the dosage.

– transient rise in the level of liver aminotransferases, bilirubin,

– changes in taste and smell

– anaphylactic shock including edema (in rare cases leading to death)

– first trimester of pregnancy and lactation

Antacids significantly reduce the absorption of Sumamed®, so the drug should be taken one hour before or two hours after taking these drugs. Macrolide antibiotics interact with cyclosporine, astemizole, triazolam, midazolam or alfentanil. Careful monitoring is recommended while taking these drugs.

Azithromycin does not affect cytochrome P-450 and therefore does not interact with theophylline, terfenadine, carbamazepine, methylprednisolone, didanosine and cimetidine.

With the simultaneous use of azithromycin and indirect anticoagulants, bleeding is possible. Therefore, it is necessary to control prothrombin time.

It is not recommended to simultaneously prescribe azithromycin and ergotamine preparations, as ergotism may develop.

Zidovudine: Azithromycin increases the concentration of the active phosphorylated metabolite of zidovudine in the blood. However, the clinical significance of this pharmacokinetic interaction is currently unclear.

Rifabutin: the combined use of azithromycin and rifabutin did not change their plasma concentration. However, at the same time, neutropenia was observed, the cause – an investigative relationship between the development of an adverse reaction and the use of this combination has not been established.

The following side effects have been reported with macrolide antibiotics: ventricular arrhythmia, including ventricular tachycardia and flutter-fibrillation (ventricular), in patients with a prolonged QT interval.

Extremely rarely, during treatment with azithromycin, there may be flutter-flicker (ventricular) and subsequent myocardial infarction in individuals with a history of arrhythmia.

The use of the drug in the second and third trimesters of pregnancy is possible when the expected benefit outweighs the potential risk to the fetus.

During treatment with the drug, it is necessary to refrain from driving vehicles and engaging in potentially hazardous activities.

There are no data on overdose with Sumamed. Overdose of macrolide antibiotics is manifested by reversible hearing loss, severe nausea, vomiting and diarrhea.

Treatment: it is necessary to induce vomiting and immediately carry out symptomatic therapy.

Store at 15 to 25 °C
Keep out of the reach of children!
Shelf life – 3 years
Do not use after the expiry date stated on the packaging.