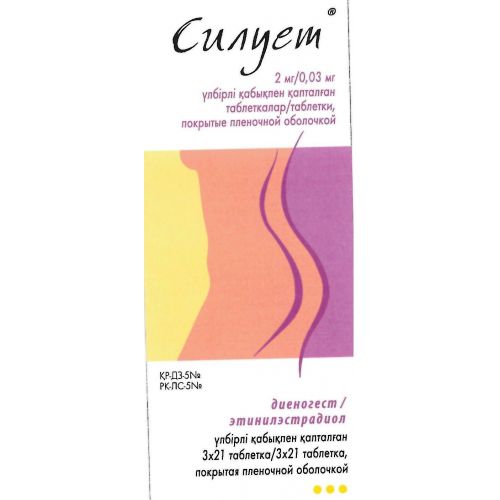 the Trade name
of Siluet®

the Description
of the Tablet, round shape, with a biconvex surface, film coated white or almost white color, with an engraving on one party of G53

Pharmacotherapeutic group
Sex hormones and modulators of a reproductive system. Hormonal contraceptives for system use. Progestogens and estrogen (the fixed combinations).
The ATX G03AA code

Pharmacokinetics Ethinylestradiol properties (30 mkg)
Absorption
Ethinylestradiol is quickly and completely soaked up after intake. After intake the maximum concentration in plasma (67 pg/ml) is reached in 1.5-4 hours. At the first passing through a liver a considerable part of ethinylestradiol is metabolized. The absolute bioavailability is about 44%.
Distribution
Etinilestraldiol in a large number, but is not specific contacts albumine (about 98%). It increases level in plasma of the globulin, connecting sex hormones (G,CSH). The seeming volume of distribution is 2.8 – 8.6 l/kg.
Metabolism
Ethinylestradiol is conjugated in mucous intestines and in a liver. The main metabolic way of ethinylestradiol is provided by aromatic hydroxylation, but his metabolism also leads to formation of a large number of hydroxylated and metilirovanny metabolites in the free, glyukuronirovanny and sulphated form. The clearance is about 2.3-7 ml/min.
Removal
ethinylestradiol Content in blood plasma decreases in two stages with elimination half-life at 1 and 10-20 hours. Ethinylestradiol in any quantity it is not removed in not changed form. Metabolites of ethinylestradiol are removed by kidneys and a liver in the ratio 4:6. Elimination half-life of metabolites makes about 1 day.
Equilibrium concentration
Equilibrium concentration is reached throughout the second half of a medical cycle, and concentration of ethinylestradiol in serum increases twice.
Diyenogest
Vsasyvaniye
Diyenogest is quickly and completely soaked up after intake. The maximum concentration in plasma (51 pg/ml) is reached in 2.5 hours. The absolute bioavailability at a concomitant use with ethinylestradiol is 96%.
Distribution
of Diyenogest contacts seralbumin and does not contact GSPG or globulin connecting corticosteroid hormones. The fraction of the free diyenogest in plasma makes 10% while 90% are nonspecific connected with albumine. The seeming volume of distribution of the diyenogest is 37-45 l.
Metabolism
of Diyenogest is generally metabolized by hydroxylation, an alternative way is the glyukuronization. Its metabolites are not active and eliminirutsya quickly from plasma therefore in significant quantities it is not possible to find metabolites in blood plasma, it concerns the changed diyenogest. The general clearance after single dose (Cl/F) is 3.6 l/h.
Removal
Elimination half-life of the diyenogest makes about 9 hours. The fraction of not changed diyenogest removed by kidneys is insignificant. After intake of 0.1 mg/kg the removal with a stake and urine has a ratio about 3.2. At intake of 86% it is removed within 6 days, 42% are brought out of them within the first 24 hours mainly with urine.
Equilibrium concentration
Concentration of GSPG in plasma does not influence diyenogest pharmacokinetics. Concentration of the diyenogest in plasma increases by 1.5 times, and equilibrium concentration is reached within 4 days.
The pharmacodynamics
of Siluet® is the combined oral contraceptive (COC) with anti-androgenic effect, contains etinilestradit as estrogen and diyenogest as progesterone. The contraceptive effect of the drug Siluet® is caused by various factors, the most important among them is the inhibition of an ovulation and change in endometrium.
The anti-androgenic effect of a combination of ethinylestradiol and the diyenogest is based generally on decrease in level of androgens in blood plasma. In one multicenter research it was shown that reception of a combination of ethinylestradiol and the diyenogest led to leveling of symptoms of an acne easy and moderately severe and had positive take at patients with seborrhea.
Diyenogest is derivative Norethisteronum which has at 10-30 times lower affinity to in vitro progesterone receptors in comparison with other synthetic progesterona. Diyenogest has no essential androgenic, mineralokortikoidny or glucocorticoid effects of in Vivo.
At the isolated use diyenogest inhibits an ovulation in a dose of 1 mg/day.
At use high-dose COC (ethinylestradiol content – 50 mkg) risk of developing endometrial cancer and ovarian cancer decreases. Presence of this effect at low – dose COC needs additional confirmation.

of the Contraindication
– hypersensitivity to drug components
– venous fibrinferments now or in the anamnesis (deep vein thrombosis, a pulmonary embolism)
– arterial fibrinferments now or in the anamnesis (for example, a myocardial infarction) or the previous states (for example, stenocardia or the tranzitorny ischemic attacks)
– existence of heavy or multiple factors of risk of arterial thrombosis (diabetes with vascular complications, heavy arterial hypertension, a heavy dislipoproteinemiya)
– the congenital or acquired predisposition to venous or arterial fibrinferments, for example, resistance to the activated protein With, insufficiency of antithrombin III, insufficiency of a protein With, insufficiency of a protein of S, a gipergomotsisteinemiya and existence of antibodies to phospholipids (antibodies to cardiolipin, lupoid anticoagulant)
– serious or multiple factors of risk of developing venous or arterial thromboses
– existence at the moment or in the anamnesis of a serious illness of a liver provided that functional hepatic tests did not return to normal values, presence of tumors of a liver (benign or malignant)
– the known or suspected hormonedependent malignant diseases (for example, genitals or a mammary gland)
– bleeding from a vagina of not clear genesis
– pregnancy and the period of a lactation
– existence in the anamnesis of migraine with focal neurologic symptomatology
– hereditary intolerance of fructose, deficiency of Lapp-lactases enzyme, glucose malabsorption – galactoses

the Medicinal interactions
of Interaction connected with induction of microsomal enzymes between oral contraceptives and other medicines can lead to breakthrough bleedings and/or to decrease in efficiency of contraception. These effects were shown for hydantoin, phenobarbital, Primidonum, carbamazepine and rifampicin. Such effects are possible also for a rifabutin, an efavirenz, not Virapinum, oxycarboazepine, the topiramat, the felbamat, a ritonavir, griseofulvin, and herbal remedy of the St. John’s wort of made a hole (Hypericum perforatum). The mechanism of these interactions is based on ability of the listed drugs to induce microsomal enzymes of a liver.
According to clinical observations the co-administration with some antibiotics (such as ampicillin and tetracycline) can lead to decrease in efficiency of contraception, the reason of this phenomenon is unknown.
The women taking above-mentioned medicines during the short span (about one week), have to in addition with reception the COOK temporarily use barrier methods of contraception, for example, during the period of reception of one of the listed medicines and 7 days after their cancellation.
The women accepting rifampicin have to use barrier methods of contraception during the period of intake of rifampicin and 28 days after its cancellation. If intake of the accompanying drug is the share of the end of reception of tablets from this packing, reception of the following packing should be begun at once, without usual break.
At prolonged use of the accompanying drug having ability to induce liver enzymes, the doctor can consider need of increase in a dose of contraceptive steroids. If this approach leads to emergence of the undesirable phenomena (for example, irregular bleedings) or to decrease in efficiency, it is necessary to use other method of contraception.
Oral contraceptives can break metabolism of some medicines. Therefore, concentration of these drugs in plasma and fabrics can be as raised (for example, cyclosporine) and lowered (lamotrigin).
The laboratory
researches Use of Contraceptive Steroids the corticosteroid – the connecting globulin and fractions of lipids/lipoproteins, on parameters of carbohydrate metabolism and also coagulation and a fibrinolysis can affect results of some laboratory researches, including biochemical indicators of function of a liver, thyroid gland, adrenal glands and kidneys and also level in plasma of transport proteins, for example. Changes usually remain within normal values.