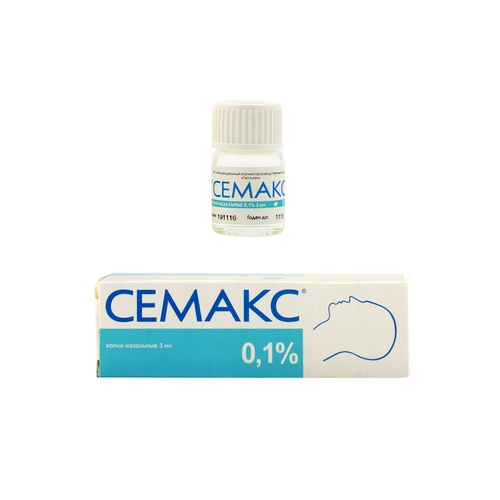 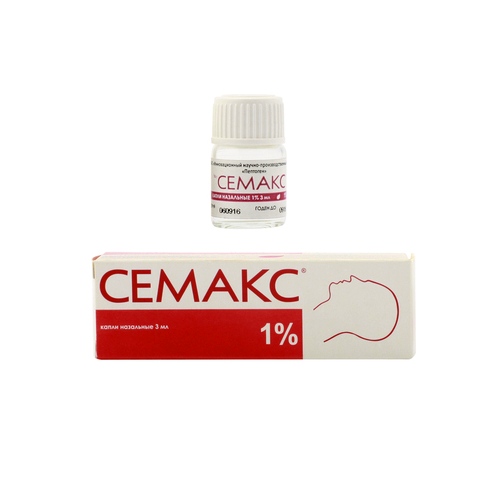 Semax Nasal drops is available in 0,1% and 1%
Semax is the world’s first peptide drug for the treatment of cerebrovascular diseases of the brain.

What can Semax® be used for?

In pediatrics: as a nootropic agent in children aged 7 years and older in the treatment of minimal cerebral dysfunctions (including ADHD – attention deficit hyperactivity disorder).

When should you not take Semax®?

How and when to take Semax®?

Semax is administered intranasally using a bottle sealed with a plastic pipette stopper.

Gently cut the tip of the pipette in place.

The cap should tightly seal the pipette.

Turn the bottle over and, gently tapping the bottom with your finger, wait for the liquid to fill the entire space of the pipette.

Remove the cap and with light pressure on the wide part of the pipette, squeeze out the required number of drops of the drug into the nasal passage (on the mucous membrane).

Store the drug with a tightly closed cap.

One drop of a standard solution contains 50 μg of active substance. With a pipette, a solution of the drug in an amount of no more than 2-3 drops is introduced into each nasal passage. If it is necessary to increase the dosage, the administration is carried out in several doses at intervals of 10-15 minutes.

With intellectual and mnestic disorders with vascular lesions of the brain, dyscircular encephalopathy, transient disorders of cerebral circulation, a single dose is 200-2000 mcg (at the rate of 3-30 mcg / kg).

The drug is prescribed 2-3 drops in each nasal passage 4 times a day for 10 -14 days, if necessary, the course of treatment is repeated.

To increase the adaptive capabilities of the human body and prevent mental fatigue 3-5 days, 2-3 drops in each nasal passage 2-3 times in the morning. The daily dose is 400-900 mcg / day. If necessary, repeat the course of treatment.

For diseases of the optic nerve, the drug is instilled 2-3 drops into each nasal passage 2-3 times a day. The daily dose is 600-900 mcg / day. The course of treatment is 7-10 days. In addition, the drug can be administered by endonasal electrophoresis. The drug is injected from the anode. The current strength is 1 mA, the duration of exposure is 8 -12-15 minutes.

With prolonged use, slight irritation of the nasal mucosa is possible.

Does Semax® have any interactions?

Based on the chemical structure of the drug, the presence of chemically incompatible combinations is not expected: the drug is rapidly destroyed and does not enter the gastrointestinal tract.

The synthetic heptapeptide is an analogue of the ACTH 4-10 fragment (methionyl-glutamyl-histidyl-phenylalanyl-prolyl-glycyl-proline), devoid of hormonal activity. All amino acids are L-form.

It is absorbed from the mucous membrane of the nasal cavity, while absorbed up to 60-70% in terms of the active substance. Semax® is quickly distributed to all organs and tissues, penetrates the BBB.

When it enters the bloodstream, Semax® undergoes fairly rapid degradation and removal from the body with urine.

Semax® has an original mechanism of neurospecific action on the central nervous system. Semax® has a pronounced neurometabolic effect, which is manifested even when administered in very small doses. Higher doses of Semax®, while maintaining the neurometabolic properties of low doses, have pronounced antioxidant, antihypoxic, angioprotective and neurotrophic effects. With intranasal administration, Semax® penetrates the BBB after 4 minutes, and the therapeutic effect with a single administration lasts 20-24 hours, which is associated with its sequential degradation, in which most of the effects of the neuropeptide are retained in its fragments.

The drug affects the processes associated with the formation of memory and learning. Semax® enhances attention in training and analysis of information, improves the consolidation of the memory footprint; improves the adaptation of the body to hypoxia, cerebral ischemia, anesthesia and other damaging influences. Semax® has a stimulating effect on the population of cholinergic neurons in the basal forebrain nuclei. The targeted action of Semax® on cholinergic neurons is accompanied by a significant increase in the activity of the acetylcholinesterase enzyme in specific brain structures, which correlates with an improvement in learning and memory formation.

Semax® affects the processes of delayed neuronal death, including local inflammation, the formation of nitric oxide, oxidative stress and dysfunction of trophic factors. A powerful, comparable to the effect of NGF, trophotropic effect of Semax® on neurons of the cholinergic group both in a complete environment and in unfavorable conditions caused by glucose and oxygen deprivation. Semax® at the gene level includes the synthesis of neurotrophins – regulators of growth and differentiation of nervous tissue (BDNF factor). Semax® has a direct effect on molecular triggering mechanisms, on the normalization of cytokine balance and on an increase in the level of anti-inflammatory factors, reducing the formation of nitric oxide, causing inhibition of lipid peroxidation (LPO) processes, activation of superoxide dismutase (SOD) synthesis and a decrease in the level of cyclic guazine monophosphate (cGMP ).

Semax® has a positive effect on the adaptation of the body to hypoxia. The drug was found to be capable of arresting post-hyperventilation EEG effects caused by a compensatory decrease in cerebral blood flow. The drug is practically non-toxic after a single and long-term administration. Does not show allergic, embryotoxic, teratogenic and mutagenic properties. Does not have a local irritating effect.

This product was manufactured by PEPTOGEN INPC (Russia)