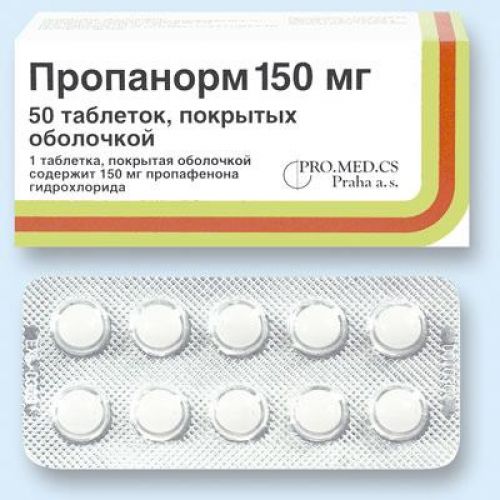 Pharmacokinetics Occurs properties absorption more than 95% of drug. The maximum concentration in blood plasma is reached approximately in 2-3 hours. Propafenon shows dose-dependent bioavailability, the t.e bioavailability increases with increase in a dose. At increase in a single dose from 150 mg to 300 mg – it increases from 5% up to 12%, and at 450 mg – up to 40-50%. Permeability through hematoencephalic and placentary barriers – low. Distribution volume – 3-4 l/kg. Communication with fabric proteins and proteins of plasma makes 85-97%.
11 metabolites of drug are described, but also N-dezoksipropilpropafenon are of interest only 5-hydroksipropafenon. Oxidizing metabolism depends on specific cytochrome which activity is genetically determined.
Therapeutic range of concentration of a prpafenon in plasma is 0.5-2.0 mg/l.
Propafenon is completely metabolized. CYP2D6 isoenzyme takes part in metabolism. At patients with fast type of metabolic processes (90 – 95% of patients) the elimination half-life makes 5 – 6 hours, at patients with slow type of metabolic processes (5 – 10% of patients) the elimination half-life makes 15 – 20 hours. It is removed by kidneys – 38% in the form of metabolites (less than 1% in not changed look), with bile – 53% (in the form of glucuronides, sulfates and in not changed look). In a heavy liver failure the concentration of a propafenon in blood plasma increases and its elimination half-life is extended.
The pharmacodynamics
Propanorm is antiarrhytmic means. He causes lowering of excitability of cells of a cardiac muscle and delay of conductivity of heart by direct effect on its cells.
Propanorm, blocking fast natrium channels, causes dose-dependent reduction in the rate of depolarization and oppresses action potential phase 0 in ventricles, but it does not affect membrane permeability for potassium ions. At Propanorm’s use occurs considerable lengthening of an interval of P-Q, expansion of the QRS complex. Drug slows down carrying out on Purkinye fibers, extends the effective refractory period of auricles, an atrioventricular node, additional bunches, and to a lesser extent, ventricles. Any significant changes in the range of Q-T are not observed. Has mild beta and adrenoceptor blocking effect. Propanorm reduces frequency cordial reduction and reduces arterial blood pressure.

the Route of administration and doses
Drug dosing considerably depends on specific features of a disease therefore the attending physician has to appoint and control treatment. It is recommended to begin therapy with 1 tablet (150 mg) three times a day. Gradual increase in doses (through three – four days) is carried out under control of the ECG and arterial blood pressure.
It is possible to raise a dose to 2 tablets 2 times a day or as much as possible to 2 tablets 3 times a day. At advanced age, generally appoint 2 tablets (300 mg) a day. Exceeding the maximum daily dose of 900 mg is not allowed. A pill is taken entirely and washed down with a small amount of water after a meal.

Side effects
Side effects depend on a dosage. Appear first of all at the beginning of therapy and are reversible. In most cases drug withdrawal but only change of a dosage is not required.
Often (up to 20%)
– bradycardia, ventricular tachyarrhythmias, a stethalgia, development or
aggravation of heart failure (at patients with initially reduced
function of a left ventricle), sinuatrial blockade, AV blockade,
disturbances of intra ventricular conductivity, supraventricular
tachyarrhythmias, at reception in high doses – orthostatic hypotension – change of taste, dryness in a mouth, nausea, a loss of appetite, feeling
of weight in epigastriums, constipations or diarrhea
– a headache, dizziness
– oppression of a marrowy hemopoiesis (leukopenia, thrombocytopenia),
lengthening of a bleeding time, electrolytic disturbances – an oligospermatism, decrease in potency – skin rash, an itching, a dieback, a small tortoiseshell, a hemorrhagic
enanthesis -weakness, arthralgias
Seldom
– an agranulocytosis, spasms, a bronchospasm
– abnormal liver functions, cholestatic jaundice
– illegibility of sight, a diplopia, a sleep disorder
– confusion of consciousness
Isolated cases
– manifestations of symptoms of a lupus erythematosus

of the Contraindication
– chronic heart failure
-cardiogenic shock (except for caused by arrhythmia)
– the profound bradycardia
– the previous sinuatrial, atrioventricular and
intraventricular disturbances of conductivity
– a sick sinus syndrome
– disturbances of electrolytic balance
– obstructive diseases of lungs
– a myasthenia
– pregnancy, the lactation period
– children’s age up to 15 years
– hypersensitivity to a propafenon
– hypotension, orthostatic hypotension

Medicinal interactions
the Majority of clinically significant interactions with other medicines, are caused by interaction of this medicine with isoenzymes of one of types of cytochrome – P-450 cytochrome, biotransforming propafenon. The inhibition of biotransformation leads to increase in concentration in blood plasma of propranolol, a metoprolol, warfarin (it is recommended to carry out monitoring of a prothrombin time and also a warfarin dose decline), cyclosporine and also theophylline and diltiazem. Quinidine leads to statistically reliable increase in concentration of a propafenon in plasma at decrease in concentration of its main metabolite of a 5-hydroksipropafenon.
It is probable that quinidine can inhibit the hydroxylating biotransformation of a propafenon. Simultaneous use of a propafenon with rifampicin or with phenobarbital reduces influence of a propafenon as a result of induction and acceleration of its biotransformation. Use of local anesthetics (for example, at implantation of a pacemaker and also in dental practice and surgery) can cause potentsiirovany actions. At simultaneous use of digoxin and a propafenon the levels of concentration of digoxin in blood plasma increase by 30-100%. The mechanism of this medicinal interaction still is completely not explained. Perhaps, propafenon reduces renal canalicular secretion of digoxin that leads to decrease in volume of distribution of digoxin and simultaneous decrease in its extrarenal clearance. It is recommended to make constant observation of the level of concentration of digoxin in blood plasma and if necessary to reduce a digoxin dose at the beginning of therapy propafenony, at further treatment it is necessary to korregirovat digoxin doses, considering the received indicators of levels of its concentration in blood plasma.
At the combined treatment using other antiarrhytmic means there can be a summation of negative chronotropic, inotropic and dromotropic effects of other drugs, especially antiarrhytmic drugs of group I according to W. V. Williamse’s classification. These antiarrhytmic means are not recommended to be applied along with propafenony.
It is not recommended to combine propafenon with tricyclic antidepressants. Simultaneous use of a ritonavir increases the frequency of manifestation of undesirable influences of a propafenon.

The special
instructions Existence at the patient of an electrocardiostimulator requires special attention.
Doses of drug have to be reduced at patients at disturbance of functions of a liver, kidneys. In an initiation of treatment Propanormom is necessary constant ECG control. To elderly patients and patients with body weight less than 70 kg appoint drug in lower doses.
Considering probable aritmogenny influence, drug is recommended to be used strictly according to purpose and under observation of the doctor.
With care should appoint the patients who had a myocardial infarction and also patients with ”malignant” ventricular arrhythmias in the anamnesis.
Features of influence of medicine on ability to run the vehicle or potentially dangerous mechanisms
With care are appointed to the patients who are engaged in potentially dangerous types of activity requiring special attention and speed of mental and motor reactions.

To Store storage conditions at a temperature of 15-25 °C, in the dry and protected from light place.
To store out of children’s reach!

3 years
not to use a period of storage after the expiration specified on packing.