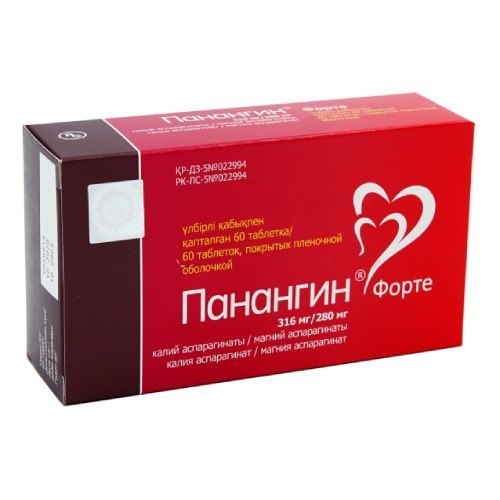 The recommended dietary intake of magnesium for men is 350 mg per day, for women – 280 mg per day. The need for magnesium increases during pregnancy and breastfeeding.

Magnesium is absorbed from the gastrointestinal tract by active transport. The kidneys are the main regulator of magnesium balance in the body. 3-5% of ionized magnesium is excreted by the kidneys.

An increase in urine volume (for example, during therapy with highly effective loop diuretics) leads to an increase in the excretion of ionized magnesium. If the absorption of magnesium in the small intestine is reduced, subsequent hypomagnesemia leads to a decrease in its excretion (<0.5 mmol/day).

Magnesium and potassium ions are important intracellular cations and play a key role in the functioning of numerous enzymes, in the formation of bonds between macromolecules and intracellular structures, and in the molecular mechanism of muscle contractility. The intra- and extracellular ratio of potassium, calcium, sodium and magnesium ions affects myocardial contractility. Endogenous asparaginate acts as an ion conductor: it has a high affinity for cells, due to the slight dissociation of its salts, ions in the form of complex compounds penetrate into the cell. Potassium aspartate and magnesium aspartate improve myocardial metabolism. Potassium/magnesium deficiency increases the risk of arterial hypertension, atherosclerosis of the coronary arteries, arrhythmias, and metabolic changes in the myocardium.

– as part of complex therapy for chronic heart diseases (chronic heart failure, condition after myocardial infarction), cardiac arrhythmias (mainly ventricular arrhythmias), and also as an additional agent for therapy with cardiac glycosides as prescribed by the attending physician.

– to replenish the intake of magnesium and potassium.

Panangin® Forte should be taken after meals, as the acidic environment of the stomach may reduce the effectiveness of the drug.

– it is possible to increase the stool when using high doses of the drug.

– Hypersensitivity to the active substances or to any of the excipients

Studies of drug interactions with drugs containing potassium aspartate and magnesium aspartate have not been conducted. According to the scientific literature, potassium and magnesium can interact with some drugs. When combined with potassium-sparing diuretics, angiotensin-converting enzyme (ACE) inhibitors, beta-blockers, cyclosporine, heparin and non-steroidal anti-inflammatory drugs, the risk of developing hyperkalemia increases.

Tetracyclines (when taken orally), iron salts and sodium fluoride reduce the absorption of potassium aspartate and magnesium aspartate from the gastrointestinal tract. The break between taking the above drugs and Panangin® Forte should be at least 3 hours.

Patients with diseases accompanied by hyperkalemia require special attention: regular monitoring of electrolytes in the blood serum is recommended.

There are no data indicating a negative effect of Panangin® Forte during pregnancy or during breastfeeding.

Panangin® Forte is contraindicated in children and adolescents, because. safety and efficacy of its use in this category of patients have not been established.

Panangin® Forte does not affect the ability to drive vehicles and other mechanisms.

There is no information on overdose with preparations containing potassium aspartate and magnesium aspartate, even when taking high doses. Given the ability of the kidneys to excrete a large amount of potassium, an increase in the dose of the drug can lead to hyperkalemia only against the background of acute or obvious violations of potassium excretion.

Magnesium has a wide therapeutic window, and in the absence of renal failure, serious side effects are extremely rare.

Oral magnesium supplementation has been reported in the literature to cause mild adverse reactions such as diarrhea. High doses of Panangin® Forte may cause frequent stools due to the magnesium it contains.

Store at a temperature not exceeding 30 °C.
Keep out of the reach of children!
Shelf life – 2 years
Do not use after the expiration date.