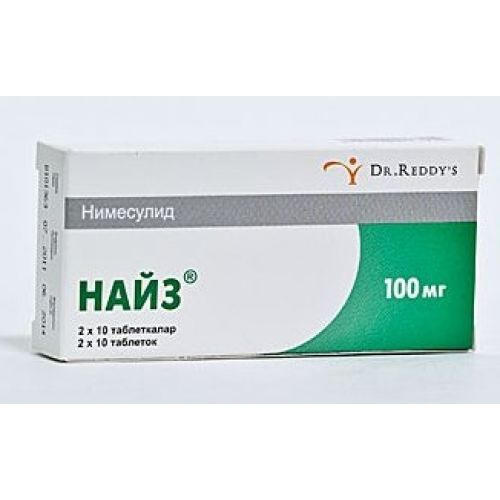 the Trade name
of Nayz®

name Nimesulide Dosage Form
of the Tablet of 100 mg

the Description
of the Tablet from color, white to white with a yellowish shade, round biconvex shape and a smooth surface

Pharmacokinetics Absorption properties at intake – high. Meal reduces absorption speed, without influencing its degree. Time of achievement of the maximum concentration of active agent in blood plasma – 1.5 – 2.5 hours. Communication with proteins of plasma makes 95%, with erythrocytes – 2%, with lipoproteins – 1%, with acid alfa1-glycoproteins – 1%. The dose of drug does not influence extent of its linking with blood proteins. The maximum concentration of Nimesulide in blood plasma reaches 3.5 – 6.5 mg/l. Distribution volume: 0.19 – 0.35 l/kg. Gets into tissues of female genitals where after single dose its concentration makes about 40% of concentration in plasma. Well gets into acidic environment of the center of inflammation (40%), synovial fluid (43%). Easily gets through gisto-gematichesky barriers. It is metabolized in a liver by fabric monooxygenases. The main metabolite – 4 hydroxynimesulide (25%) has similar pharmacological activity.
Elimination half-life of Nimesulide makes 1.56 – 4.95 hours, 4 hydroxynimesulides – 2.89 – 4.78 hours. 4 hydroxynimesulide are removed by kidneys (65%) and with bile (35%).
At patients with a renal failure (clearance of creatinine of 1.8 – 4.8 l/h or 30-80 ml/min.) and also at children and elderly people the pharmacokinetic profile of Nimesulide significantly is not changed.
A pharmacodynamics
Non-steroidal anti-inflammatory drug (NPVP) from a class of sulfonanilid. Is a selection competitive inhibitor of cyclooxygenase-2 (TsOG-2) – the enzyme participating in synthesis of prostaglandins – mediators of hypostasis, inflammation and pain. Has anti-inflammatory, analgeziruyushchy and febrifugal effect. Reversibly inhibits formation of E2 prostaglandin, both in the inflammation center, and in the ascending ways of a nociceptive system, including ways of carrying out painful impulses of a spinal cord. Reduces concentration of short-lived H2 prostaglandin of which under action prostaglandin-isomerase is formed E2 prostaglandin. Reduction of concentration of E2 prostaglandin leads to decrease in extent of activation of prostanoid receptors of ER of type that is expressed in analgetic and anti-inflammatory effects. In insignificant degree affects TsOG-1, practically without interfering with formation of E2 prostaglandin from arachidonic acid in physiological conditions thanks to what the amount of side effects of drug decreases. Inhibits release of a factor of necrosis of tumors α, causing formation of tsitokinin. It is shown that Nimesulide is capable to suppress synthesis of interleukin-6 and an urokinase, thereby interfering with destruction of cartilaginous tissue. Inhibits synthesis of metalproteases (elastases, collagenases), preventing destruction of proteoglycans and collagen of cartilaginous tissue. Interacts with glucocorticoid receptors, activating them by phosphorylation that also strengthens anti-inflammatory effect of drug

Indications
– treatment of an acute pain
– symptomatic treatment of a pain syndrome in an osteoarthritis
– primary dysmenorrhea.
Найз® it is necessary to appoint only as drug of the second line.
The decision on therapy has to be made by Nimesulide on the basis of assessment of all risks for the specific patient.

Route of administration and doses
Adult: inside on 1 tablet (100 mg) 2 times a day. The maximum daily dose for adults – 200 mg. Duration of a course of treatment is no more than 5 days.
A pill is taken with enough water preferably to food.

the Contraindication hypothermia
– hypersensitivity to Nimesulide or to one of drug excipients
– the giperergichesky reactions taking place in the past (for example a bronchospasm, rhinitis, a small tortoiseshell) in connection with intake of acetylsalicylic acid or other non-steroidal anti-inflammatory drugs
– the hepatotoxic reactions to Nimesulide taking place in the past in the anamnesis
– the accompanying intake of other substances with potential hepatotoxicity
– alcoholism, drug addiction
– ulcer of stomach or duodenum in an aggravation phase, existence in the anamnesis of an ulcer, perforation or bleeding in digestive tract
– existence in the anamnesis of cerebrovascular bleedings or other hemorrhages and also the diseases which are followed by bleeding
– serious violations of fibrillation
– serious heart failure
– a serious renal failure (clearance of creatinine & lt, 30 ml/min.)
– a liver failure
– patients with symptoms of cold or flu
– hereditary intolerance of fructose, glucose galactose malabsorption, insufficiency of invertase-isomaltase
– in diseases of a liver and increase in liver enzymes
– children’s age up to 18 years
– pregnancy and the period of a lactation

Medicinal interactions
the Concomitant use of Nimesulide with corticosteroids, antithrombocytic means and selective serotonin reuptake inhibitors (SSRIs) increases risk of developing of a gastrointestinal ulcer or bleeding.
The patients applying warfarin or similar anticoagulants and also acetylsalicylic acid at simultaneous use with Nimesulide have an increased risk of developing of bleedings. Therefore such combination is not recommended, and at severe forms of disturbance of blood clotting it is contraindicated. If such combination cannot be avoided, regular control of a condition of a coagulant system of blood is necessary.
Nimesulide can reduce effect of diuretics and other antihypertensive drugs. Some patients with a renal failure at joint appointment have Nimesulide and APF inhibitors, the antagonists of angiotensin II or substances suppressing the system of cyclooxygenase perhaps further deterioration in function of kidneys and developing of an acute renal failure which, as a rule, is reversible. Therefore it is necessary to appoint joint intake of these drugs with care, especially for elderly patients. Patients have to receive enough liquid, and renal function should be controlled carefully after the beginning of combination therapy.
At healthy volunteers Nimesulide can temporarily reduce diuretic effect of furosemide and removal of sodium, and to a lesser extent — potassium therefore at simultaneous use of Nimesulide and furosemide the patients with a renal failure or hearts should observe extra care. Joint intake of Nimesulide and furosemide concentration – time’ (AUC) and decrease in cumulative excretion of furosemide without change of renal clearance of furosemide leads to reduction (approximately for 20%) the areas under a curve ‘.
Nimesulide can reduce clearance of lithium that leads to increase in level of lithium in blood plasma and its toxicity. When prescribing Nimesulide the patients receiving therapy by lithium drugs should exercise frequent control of level of lithium in plasma.
At simultaneous use with glibenclamide, theophylline, warfarin, digoxin, Cimetidinum and antiacid drugs of clinically significant interactions it is noted.
Nimesulide suppresses activity of CYP2C9 enzyme. At a concomitant use with Nimesulide of the drugs which are substrates of this enzyme, concentration of these drugs in plasma can increase.
When prescribing Nimesulide less than in 24 hours prior to or less than in 24 hours after reception of a methotrexate, it is required to be careful as in such cases methotrexate level in plasma and, respectively, toxic effects of this drug can increase.
At simultaneous use with cyclosporine the increase in nephrotoxicity of the last is possible.
The researches in vitro showed that Nimesulide is forced out from places of binding by tolbutamide, salicylic acid and valproic acid. In spite of the fact that these interactions were defined in blood plasma, the specified effects were not observed in the course of clinical use of drug.
During treatment by Nimesulide it is necessary to avoid simultaneous use with the drugs having hepatotoxic effect and also alcohol abuses as these substances can increase risk of emergence of side reactions from a liver.

Special instructions
Drug is not recommended to be used as febrifuge. At fervescence and emergence of grippopodobny symptoms in the patients receiving Nayz® it is necessary to stop administration of drug.
For reduction of risk of development of side effects it is necessary to use drug in a minimal effective dose with the smallest duration of a course of treatment. If the condition of the patient does not improve, treatment needs to be stopped.
Use for patients from the liver broken by function
At patients with the profound abnormal liver functions is broken Nayz’s metabolism, the clearance decreases and concentration of Nimesulide in blood increases that can lead to drug accumulation. Also there are messages about the abnormal liver functions which arose against the background of Nayz’s reception, from moderate to heavy including with a lethal outcome. Thus, Nayz® is not recommended for use at patients with liver pathology.
At emergence in the patients accepting Nayz®, symptoms indicating injury of a liver (for example, anorexia, nausea, vomiting, an abdominal pain, increased fatigue, dark urine), or abnormal results of functional hepatic trials, drug should be cancelled. Such patients are not recommended to appoint Nayz® and further.
During treatment by Nayz it is recommended to avoid simultaneous use of hepatotoxic drugs, analgetics, other NPVP and alcohol intake.
Use for patients with impaired renal function
With care it is necessary to use drug at patients with renal failures (clearance of creatinine – less than 30 ml/min.) as at such patients the elimination half-life of Nimesulide increases.
As Nayz® can influence function of thrombocytes, patients should appoint it with care with hemorrhagic diathesis. However Nayz® does not replace acetylsalicylic acid at prevention of cardiovascular diseases.
There are data on very exceptional cases of serious skin reactions to non-steroidal anti-inflammatory drugs some of which can be deadly. Including exfoliative dermatitis, Stephens’s syndrome – Johnson, and toxic epidermal necrosis. Patients have very high risk of such reactions if at earlier appointed course of treatment the reaction approach in most cases arose within the first month of treatment. Найз® it is necessary to cancel at the first symptoms of skin rash, damage of mucous membranes and other signs of allergic reaction.
Features of influence of medicine on ability to run vehicles or potentially dangerous mechanisms
Patients whose activity requires special attention and speed of psychomotor reactions have to be prevented about possibility of drowsiness or dizziness.

The form of release and packing
On 10 tablets pack into blister strip packaging from a film of PVC and aluminum foil.
On the 2nd planimetric packing together with the instruction for medical use in the state and Russian languages place

Storage conditions in a cardboard pack
to Store in the dry place protected from light at a temperature not above 25 °C.
To store in the places inaccessible for children!

3 years
After an expiration date not to apply a period of storage.

Mr. Hayderabad Naimenovaniye of the owner of the registration certificate:
“The Dr. of Reddi’s Laboratoris Limited”, India