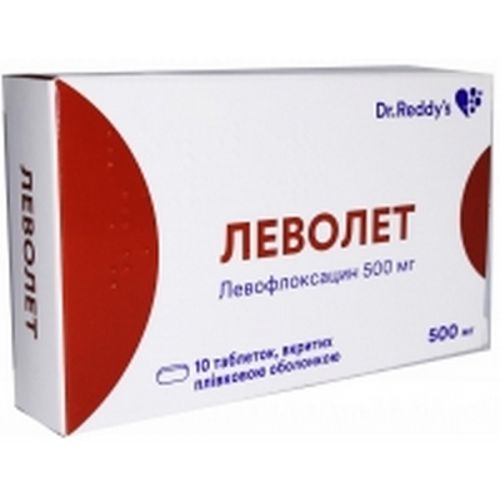 name Levofloxacin Dosage Form
of the Tablet, coated 250 and 500 mg

Indications
– infections of ENT organs (sinusitis, average otitis)
– inflammations of the lower airways: exacerbation of chronic bronchitis, community-acquired pneumonia
– the uncomplicated and complicated infections of urinary tract (including pyelonephritis), prostatitis
– infections of genitals (including urogenital clamidiosis)
– infections of skin and soft tissues (the festered atheromas, abscess, furuncles)
– the septicaemia connected with the listed above indications

Side effects
often
– nausea, vomiting, loss of appetite,
– increase in activity of enzymes of a liver (AlAT, AsAT), increase in level of bilirubin and creatinine in blood serum, hepatic reactions
– an eosinophilia, a leukopenia
in certain cases
– a headache, dizziness, catalepsy, drowsiness, a sleep disorder,
– abdominal pain, diarrhea, digestion disturbance
– hemolytic anemia, a pancytopenia
– damages of muscles (rhabdomyolysis)
– an itching, erubescence, increase sensitivity to solar and ultraviolet radiation, (Stephens-Johnson’s syndrome), a toxic epidermal necrolysis (Lyell’s disease), an exudative mnogoformny erythema
seldom
– colitis, including pseudomembranous (it is shown by gemmoragichesky diarrhea)
– paresthesias in hands, a shiver, concern, conditions of fear, attacks of spasms, confusion of consciousness
– tachycardia, falling of arterial blood pressure, vascular collapse
– damages of sinews (including a tendinitis), muscle weakness, articulate and muscular pains, a rupture of sinews
– a neutropenia, thrombocytopenia (tendency to hemorrhages or bleedings)
is very rare
– anaphylactic and anaphylactoid reactions, (a small tortoiseshell, a bronchospasm, a Quincke’s edema)
– an agranulocytosis, hemolytic anemia (to consider in diabetes)
– a disorder of vision and hearing, disturbances of flavoring sensitivity and sense of smell, lowering of tactile sensitivity, psychotic reactions of type of hallucinations and depressions, disorders of movements, including when walking
– aggravation of a porphyria
– deterioration in function of kidneys up to an acute renal failure
Other side effects, in isolated cases an asthenia
very seldom
– fever, an allergic pneumonitis,

Medicinal interactions
the Drug Levolet, reduces effect of drugs – oppressing motility of intestines, sukralfat, magnesium – both aluminum the containing antiacid means and salts of iron, it is necessary to take the drug not less, than in 2 hours prior to or after reception of these means. Joint administration of drug of Levolet and non-steroidal anti-inflammatory drugs, theophylline increases convulsive readiness. Cimetidinum and drugs blocking canalicular secretion slow down drug Levolet removal. Levolet increases elimination half-life of cyclosporine. At a combination of drug of Levolet to antagonists of vitamin K the control of the coagulant system of blood is necessary. Glucocorticoids increase risk of a rupture of sinews. Alcohol can enhance side effects from central nervous system (dizziness or catalepsy, drowsiness, visual disturbances), worsening reactionary ability and ability to concentration of attention
the Medicines causing lengthening of an interval
QT Levofloxacin, as well as other ftorkhinolona it is necessary to apply with care at the patients taking the drugs causing lengthening of an interval of QT (for example, antiarrhythmic drugs of the class IA and III, tricyclic antidepressants, macroleads, neuroleptics) (see. Special instructions Lengthening of an interval of QT).
In researches of pharmacokinetic interactions levofloxacin did not affect theophylline pharmacokinetics (marker CYP1A2 substrate) that indicates that levofloxacin is not CYP1A2 inhibitor.
Other types of interaction
Food
clinically significant interaction with food was Not noted. Thus, Levolet in tablets can be accepted irrespective of reception food.

Special instructions
during treatment it is necessary to avoid power solar and artificial ultra-violet irradiation in order to avoid a photosensitization. At suspicion of pseudomembranous colitis the Levolet should cancel immediately and to begin the corresponding treatment. At emergence of symptoms of a tendinitis of Levolet immediately cancel. It must be kept in mind that at patients with a brain damage in the anamnesis (a stroke, a severe injury) development of spasms is possible, at insufficiency glyukozo-6-fosfatdegidrogenazy – risk of development of hemolysis. In this regard, treatment of such patients with the Levolet’s drug should be carried out carefully. When assigning the praparat of Levolet sick diabetes it is necessary to consider a possibility of development of a hypoglycemia.
Use for patients from the liver broken by function and kidneys
With care it is necessary to use drug at patients with renal failures as at such patients the elimination half-life
of the drug Levolet Osobennosti of influence of medicine on ability to run the vehicle or potentially dangerous mechanisms
during treatment increases it is necessary to abstain from occupations potentially dangerous types of activity demanding the increased concentration of attention and speed of psychomotor reactions
Lengthening of an interval of QT
of Ftorkhinolona, including levofloxacin, it is necessary to apply with care at patients who have known risk factors of lengthening of an interval of QT, such as:
– a congenital syndrome of lengthening of an interval of QT
– the accompanying use of the medicines causing lengthening of an interval of QT (for example, antiarrhythmic drugs of the class IA and III, tricyclic antidepressants, macroleads, neuroleptics)
– not corrected disturbance of balance of electrolytes (for example, a hypopotassemia, a hypomagnesiemia)
– heart diseases (for example, heart failure, a myocardial infarction, bradycardia).
Patients of advanced age and women can be more sensitive to the drugs causing lengthening of an interval of QT. Therefore, ftorkhinolona including levofloxacin, it is necessary to apply with care at these groups of patients (see. Route of administration and doses Patients of advanced age, Medicinal interactions, Side effects, Overdose).

Overdose
Symptoms: confusion of consciousness, dizziness, consciousness disturbances, attacks of spasms, gastrointestinal disorders, damages of mucous membranes, lengthening of an interval of QT
Treatment: symptomatic, specific antidote does not exist. Levolet is not brought by a hemodialysis and peritoneal dialysis

the Form of release and packing
On 10 tablets pack into blister strip packaging from a film of polyvinylchloride and aluminum foil.
On 1 planimetric packing together with the instruction for medical use in the state and Russian languages place

Storage conditions in a cardboard pack
to Store in the dry place protected from light at a temperature not above 25 °C. To store in the places inaccessible for children!