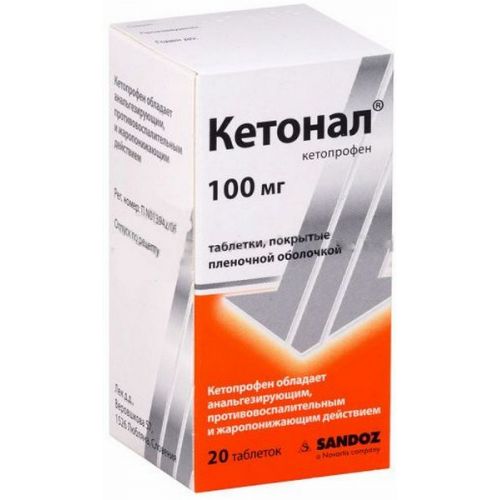 the Trade name
of Ketonal® forte

The description
of the Tablet, film coated, light blue color, round shape, with a biconvex surface.

Pharmacokinetics Ketoprofen properties is quickly soaked up from digestive tract. The bioavailability after intake of 50 mg of ketoprofen is 90% and increases consistently with increase in a dose. Meal does not affect the general bioavailability (AUC) of ketoprofen, but reduces absorption speed. Ketoprofen for 99% contacts proteins of blood plasma, mainly albumin fraction.
The volume of distribution is 0.1-0.2 l/kg. After ketoprofen intake the peak plasma concentration is reached in 1 h 22 min.
In synovial fluid the concentration of ketoprofen reaches 50% of plasma concentration (1.5 mkg/ml), ketoprofen is removed from synovial fluid slowly – within 24 hours.
Is exposed to metabolism in a liver where it conjugates with glucuronic acid. About 80% of ketoprofen are allocated with urine, mainly (more than 90%) in the form of a conjugate with glucuronic acid. Less than 10% are removed in not changed view with a stake.
Ketoprofen does not kumulirut in fabrics. Elimination half-life of ketoprofen reaches 2 hours.
At patients with a renal failure ketoprofen is removed more slowly, and its elimination half-life lasts for 1 hour. At them the clearance of ketoprofen is, also, reduced. In a heavy renal failure the dose decline is required. At patients with a liver failure the concentration of ketoprofen in blood plasma is increased approximately twice that demands purpose of the lowest daily dose.
The pharmacodynamics
Ketonal forte possesses the anti-inflammatory, anesthetizing and febrifugal action.
The mechanism of action is connected with inhibition of biosynthesis of prostaglandins and leukotrienes due to suppression of activity of enzyme of cyclooxygenase (cyclooxygenase-1 and cyclooxygenase-2) which catalyzes synthesis of prostaglandins from arachidonic acid. Ketoprofen stabilizes membranes of lysosomes and has antibradikininovy activity.

Indications
Rheumatic diseases:
– a pseudorheumatism
– seronegative spondylarthrites (an ankylosing spondylarthritis, reactive arthritis, psoriasis arthritis)
– gout, a pseudogout
– an osteoarthrosis
– extraarticular rheumatism (a tendinitis, a bursitis, a capsulitis of a shoulder joint)
the Pain syndrome:
– posttraumatic
– postoperative
– algodismenoreya
– pain in metastases in a bone at patients with oncological diseases.

The route of administration and doses
take the Drug Ketonal of a tablet inside, without chewing, washing down with enough water or milk (not less than 100 ml), at meal time or right after meal.
To adults and children 18 years are more senior: on 1 tablet of 100 mg 2 times a day.
The recommended dose at treatment of a pseudorheumatism makes on 1 tablet 100 mg no more than two times a day. The maximum daily dose of ketoprofen makes 200 mg.
In order to avoid undesirable side effects the patient can accept antiacid means along with the drug Ketonal.
Duration of treatment is defined by the doctor.
At patients with not heavy renal failure with clearance of creatinine is lower 20ml/mines and with a chronic disease of a liver (with the reduced level of albumine in blood serum) it is necessary to reduce a ketoprofen dose.
Patients of advanced age
Elderly patients are subject to the increased risk of serious consequences of undesirable effects. If treatment with NPVP is considered important, it is necessary to apply the smallest doses, and the patient every time has to be under observation for four weeks after an initiation of treatment using NPVP regarding detection of gastrointestinal bleeding.

Side effects
At assessment of frequency of emergence of different side reactions were used such gradation: ‘very often’ – ³ 10%, are ‘frequent’ – from ³ 1% to & lt, 10%, ‘infrequently’ – from ³ 0.1% to & lt, 1%, is ‘rare’ – from ³ 0.01% to & lt, 0.1%, is ‘very rare’ – & lt, 0.01%.
Often:
– dispeptic phenomena, loss of appetite, nausea, vomiting, meteorism, abdominal pains, constipation
Infrequently:
– diarrhea, gastritis
– a headache, dizziness, drowsiness, a loss of consciousness
– skin rash, a small tortoiseshell
Seldom:
– hemorrhagic anemia, a leukopenia
– a depression, insomnia, nervousness, paresthesia
– deterioration in sight
– sonitus
– stomatitis, ulcer of stomach and duodenum
– hepatitis, increase in level of transaminases and bilirubin
– increase in body weight
– an acute anaphylaxis
– a bronchospasm, an attack of bronchial asthma
– puffiness, fatigue
– increase in weight
is Very rare:
– exacerbation of colitis and Crohn’s disease, gastrointestinal bleedings, perforation, a melena, a hematemesis
– an abnormal liver function
– an acute renal failure, tubulointerstitsialny nephrite
– a hypernatremia, a hyperpotassemia
– an agranulocytosis, thrombocytopenia, suppression of activity of marrow
– spasms, a dysgeusia
– heart failure
– arterial hypertension, vasodilation
– rhinitis
– a photosensitization, a Quincke’s edema, bullous rash, including Stephens-Johnson’s syndrome, a toxic epidermal necrolysis

of the Contraindication
– individual hypersensitivity (instructions in the anamnesis on asthma, a bronchospasm, urticaria or rhinitis connected with intake of acetylsalicylic acid)
– heavy heart failure
– digestive tract diseases in an aggravation phase (gastritis, a peptic ulcer of a stomach and duodenum, the instruction in the anamnesis on gastrointestinal bleedings, education or a perforation of ulcers)
– bleedings (gastrointestinal, cerebrovascular or other active bleedings)
– tendency to bleedings
– the significant disturbances of functions of a liver or kidneys
– disturbances from blood (leukopenia, thrombocytopenia, disturbances of hemocoagulation)
– bronchial asthma, rhinitis
– the last trimester of pregnancy and the period of a lactation
– children’s and teenage age up to 18 years
– hemorrhagic diathesis
– at treatment of the pain syndromes arising after the surgical intervention assuming introduction of the aortocoronary shunt
– anaphylactic reactions from the death
– a hereditary nepernosimost of lactose

Medicinal interactions
Ketoprofen should not be applied to ketoprofen, aspirin or other NPVP in combination with other NPVP and salicylates.
At the combined use with corticosteroids, drugs for treatment of a depression the risk of formation of ulcers and gastrointestinal bleeding increases.
Antioagulyanta (heparin and warfarin) and inhibitors of aggregation of thrombocytes (i.e. tiklopidin, klopidogrel) increase risk of developing of bleeding. If joint reception is inevitable, careful observation of the patient is necessary.
Ketoprofen reduces efficiency hypotensive and diuretics. Risk of developing a renal failure is more at patients who accept diuretics, antihypertensives or APF inhibitors along with NPVP.
Potassium drugs, kaliysberegayushchy diuretics, APF inhibitors, heparins (low molecular weight or undivided on fraction), pentoksifillin, probenetsid, cyclosporine, takrolimus and Trimethoprimum at simultaneous use with NPVP can promote emergence of a hyperpotassemia.
Ketoprofen strengthens effect of oral glucose-lowering drugs and some anticonvulsants (Phenytoinum).
Ketoprofen, as well as other NPVP reduces removal and by that increases toxicity of cardiac glycosides, lithium, cyclosporine and a methotrexate.
NPVP can reduce efficiency of mifepristone. Reception of NPVP needs to be begun not earlier than in 8-12 days after mifepristone cancellation.
At simultaneous use of cyclosporine with ketoprofen the risk of toxic damage of kidneys increases.

Special instructions
It is necessary to avoid simultaneous use of ketoprofen with other NPVP, including selection TsOG-2 inhibitors.
With extra care patients should appoint drug with digestive tract diseases in the anamnesis (bleeding and perforation can suddenly develop without the previous symptoms).
It is necessary to be careful also at the patients taking medicine which can increase risk of formation of ulcers or bleeding, such as corticosteroids of oral introduction, anticoagulants (for example warfarin), selective serotonin reuptake inhibitors or antiagregantny means (including acetylsalicylic acid). The risk of developing of gastrointestinal bleeding, formation or a perforation of ulcers increases with increase in doses of NPVP (oral corticosteroids), drugs for treatment of a depression (from group of selective serotonin reuptake inhibitors). In such cases it is necessary to consider combination therapy with the drugs having protective effect on digestive tract (for example, mizoprostol or inhibitors of a protonew pomp).
Patients with digestive tract diseases (especially to elderly people) should report to the attending physician about any abdominal manifestations.
In case of developing of gastrointestinal bleeding or ulceration of digestive tract, it is necessary to stop treatment immediately.
Careful observation of patients with arterial hypertension and/or stagnant heart failure as there are messages about development or strengthening of a delay of liquid in an organism during therapy by ketoprofen is necessary.
During treatment, ketoprofen recommends monitoring of arterial blood pressure, especially at patients with cardiovascular diseases.
Patients with uncontrollable arterial hypertension, acute and heavy chronic heart failure, coronary heart disease, diseases peripheral arteries and/or cerebrovascular diseases should carry out treatment by ketoprofen with care. Use of some NPVP can be connected with risk of developing arterial thromboses (myocardial infarction, a stroke). Data for an exception of such risk for ketoprofen are not enough.
At patients with asthma, with chronic rhinitis, chronic sinusitis and/or a nasal polipoz, emergence of allergic reactions is possible more often than at other patients.
It is also necessary to be careful at patients with disturbances of a hemostasis, hemophilia, an angiohemophilia – Jürgens, heavy thrombocytopenia, a renal or liver failure and at those patients who accept anticoagulants (coumarin and derivatives of heparin, first of all heparins of low molecular weight).
In an initiation of treatment it is necessary to carry out careful monitoring of renal function at patients with heart failure, cirrhosis and a nephrosis, at the patients accepting diuretics at patients with chronic kidney disease, especially if the patient at advanced age. Intake of ketoprofen can cause decrease in a renal blood-groove as a result of inhibition of prostaglandin in such patients and lead to a renal decompensation.
If during treatment visual disturbances are observed, treatment should be stopped.
Treatment by ketoprofen should be stopped before performing radical surgical interventions.
Intake of ketoprofen can worsen female fertility and is not recommended for women who want to become pregnant.
With care people of advanced age should appoint drug.
Long courses of therapy of NPVP, including ketoprofen, demand monitoring of hematologic indicators, indicators of function of a liver and kidneys, in particular from elderly patients.
Pregnancy
the Drug Ketonal forte can be appointed at the first or second trimester of pregnancy only if exceeding advantage of the expected therapeutic effect over risk for mother and/or a fruit is expected.
The feature of influence of medicine on ability to run the vehicle or potentially dangerous mechanisms
in case of developing of dizziness, a spatial disorientation, drowsiness, out-of-focus sight or spasms should not conduct transport or to operate potentially dangerous mechanisms.

Overdose
Cases of overdose were noted at doses to 2.5 g of ketoprofen. Symptoms: slackness, drowsiness, nausea, vomiting, abdominal pain, vomiting blood, black kcal, consciousness disturbance, respiratory depression, spasms, renal failure and renal failure.
Treatment: symptomatic, specific antidote does not exist. Gastric lavage and use of activated carbon is shown. Impact of ketoprofen on digestive tract can be weakened by means of H2 blockers, inhibitors of a proton pomp and prostaglandins.
In the presence of a renal failure for removal of the circulating keotoprofen from blood the procedure of a hemodialysis is recommended.

A release form
On 20 tablets place in bottles of amber glass, with the twisting plastic covers with control of the first opening.
On 1 bottle together with the instruction for medical use in the state and Russian languages put in a pack from cardboard.

Not to use a period of storage of 5 years after a drug expiration date.