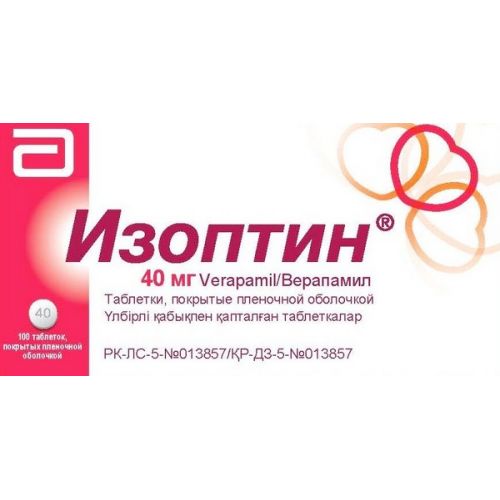 Verapamil is rapidly and almost completely absorbed in the small intestine. The absorption rate is 80–90%. Plasma protein binding – 90%. Bioavailability – 10-20% .. The maximum plasma concentration is achieved in 1-2 hours after taking the drug. Due to the extensive metabolism of verapamil, a large number of metabolites are formed. Of the metabolites, only norverapamil is pharmacologically active (approximately 20% of the hypotensive activity of verapamil). The half-life is 3-7 hours for a single dose and 4.5-12 hours for a course administration. Verapamil and its metabolites are excreted mainly through the kidneys; only 3-4% is excreted unchanged. Up to 16% of the drug is excreted in feces.

There is no difference in the pharmacokinetics of verapamil in people with healthy kidneys and in patients with end-stage renal disease. The half-life is increased in patients with liver cirrhosis due to low clearance and high volume of distribution.

Verapamil, the active ingredient of Isoptin®, blocks the transmembrane flux of calcium ions in the cell of the heart and vascular smooth muscles. It directly reduces myocardial oxygen demand by influencing the energy-consuming metabolic processes in myocardial cells and reducing afterload. By blocking the calcium channels of the smooth muscles of the coronary arteries, blood flow to the myocardium increases, even in postischemic areas, and the spasm of the coronary arteries is relieved. These properties determine the anti-ischemic and antianginal efficacy of Isoptin® in all forms of coronary heart disease.

The antihypertensive efficacy of Isoptin® is due to a decrease in peripheral vascular resistance without an increase in heart rate as a reflex response. No undesirable changes in the physiological values ​​of blood pressure are observed.

Isoptin® has a pronounced antiarrhythmic effect, especially in supraventricular arrhythmias. It delays the conduction of the impulse in the atrioventricular node, as a result of which, depending on the type of arrhythmia, the sinus rhythm is restored and / or the ventricular rate is normalized.

Doses are selected individually for each patient. The drug should be taken without dissolving or chewing with a sufficient amount of liquid (for example, a glass of water, in no case grapefruit juice), preferably during or immediately after a meal.

Application in pediatrics (only for cardiac arrhythmias):

Elderly patients may be more sensitive to the action of verapamil hydrochloride when using the usual dose for adults, the dose may be reduced for potoemu.

In patients with limited liver function, depending on the severity, the effect of verapamil hydrochloride is enhanced and prolonged due to a slowdown in the disintegration of the drug. Therefore, in such cases, the dosage should be set with extreme caution and start with small doses (for example, for patients with limited liver function, first 2-3 times a day 40 mg, respectively 80-120 mg per day).

After prolonged therapy, the drug should be discontinued, gradually reducing the dose.

– development or exacerbation of heart failure, a significant decrease in blood pressure and / or orthostatic reactions

– in elderly patients with long-term therapy, gynecomastia developed, which completely disappeared after discontinuation of the drug
– angioedema, Stevens-Johnson syndrome
– hypersensitivity

During treatment with Isoptin, do not use intravenous beta-blockers at the same time (with the exception of intensive care).

Antiviral (HIV) drugs: Plasma concentrations of verapamil may rise. Prescribe with caution, it may be necessary to reduce the dose of verapamil.

Digoxin, digitoxin: Increased plasma digoxin levels caused by decreased renal excretion. Particular attention should be paid to the symptoms of overdose with digoxin / digitoxin and, if necessary, reduce the dose of glycoside.

Cimetidine: the area under the concentration-time curve increases, the clearance of verapamil decreases.

Lithium: Increases the neurotoxicity of lithium.

Antidiabetic drugs (glyburide): increases the Cmax of glyburide by approximately 28%.

Colchicine: Combination with verapamil is not recommended due to increased colchicine exposure.

Almotriptan: the area under the concentration-time curve increases, Cmax increases.

Phenobarbital: increases the clearance of verapamil.

Sulfipyrazone: there may be a decrease in the hypotensive effect.

ethanol: the breakdown of ethanol is delayed and the level of ethanol in plasma increases, thereby verapamil enhances the effect of alcohol.

Treatment with HMG-CoA reductase inhibitors (simvastatin, atorvastatin, lovastatin) in patients taking verapamil should start with the lowest possible dose. If a patient who is already taking verapamil needs an HMG-CoA reductase inhibitor (simvastatin, atorvastatin, lovastatin), consider the need to reduce the dose of statins and titrate against the background of plasma cholesterol concentration.

Grapefruit juice: the area under the concentration-time curve increases, the Cmax of verapamil increases.

St. John’s wort: the area under the concentration-time curve decreases with a corresponding decrease in Cmax.

Interaction based on cytochrome P450 isoenzyme 3A4.

Verapamil hydrochloride is metabolized in the liver by cytochrome P450 isoenzyme 3A4 and inhibits this enzyme.

In this regard, attention should be paid to the following interactions:

Other inhibitors of the cytochrome P450 isoenzyme 3A4, such as azole fungicides (such as clotrimazole or ketoconazole), protease inhibitors (such as ritonavir or indinavir), macrolides (such as erythromycin or clarithromycin), and cimetidine: an increase in verapamil hydrochloride plasma and cimetidine: / or the plasma level of these drugs is due to the effect on their metabolism.

Verapamil should be used with caution in patients:

– with AV block of the 1st degree;

– with bradycardia (heart rate less than 50 beats per minute);

During the use of the drug, you should avoid eating food and drinks with grapefruit. Grapefruit may increase plasma levels of verapamil hydrochloride.

The ability to influence the reaction rate when driving vehicles or other mechanisms.

Depending on the individual reaction, the ability to drive vehicles or work with mechanisms may be impaired. This is especially true of the initial phase of treatment, when changing the antihypertensive drug, as well as while taking the drug with alcohol.

Symptoms depend on the amount of drug taken, the time the detoxification measures were taken, and the age of the patient.

Treatment is aimed at removing the substance from the body and restoring the stability of the cardiovascular system.

General measures: gastric lavage is recommended even if more than 12 hours have passed since the drug was taken and gastrointestinal motility is not detected (absence of intestinal murmurs). Common resuscitation measures include chest compressions, artificial respiration, defibrillation, and pacing. Hemodialysis is not indicated. Hemofiltration and possibly plasmaphoresis may be beneficial (calcium antagonists bind well to plasma proteins).

Special measures: elimination of cardiodepressive influences, hypotension and bradycardia. A specific antidote is calcium: 10-20 ml of 10% calcium gluconate solution (2.25-4.5 mmol) is injected intravenously. If necessary, you can repeat the administration or carry out an additional drip infusion (for example, 5 mmol / hour).

In case of hypotension as a result of cardiogenic shock and arterial vasodilation, dopamine (up to 25 μg / kg / min), dobutamine (up to 15 μg / kg / min), or norepinephrine are used. Serum calcium concentrations should be in the upper normal range or slightly higher than normal. In connection with vasodilation in the early stages, a replacement fluid (Ringer’s solution or saline) is introduced.

Store at a temperature not exceeding 25 ° C.
Keep out of the reach of children!

Shelf life 5 years
Do not use the drug after the expiration date indicated on the package.