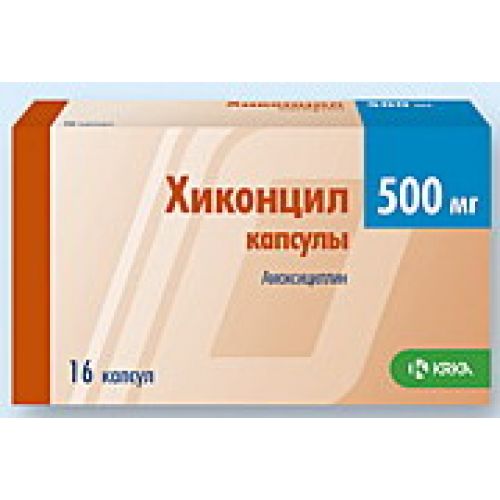 the Description
Solid opaque gelatin capsules of No. in size 2 (for a dosage of 250 mg) or No. 0 (for a dosage of 500 mg). The capsule body from beige till pink color, a lid – from brown till dark burgundy color. Contents of capsules – the granulated powder from white till slightly yellowish color

Clearance of creatinine of ml / with (ml/min.)

hours 8-12 hours 12-24 hours
When carrying out peritoneal dialysis the correction of a dose is not required. The hemodialysis removes 85% of amoxicillin and therefore it is necessary to appoint the recommended dose after the termination of a hemodialysis.
The pharmacodynamics
Effect of amoxicillin on bacterial cells
Hikontsil suppresses the last phase of formation of a cell wall of bacteria by inhibition of effect of transpeptidases – the enzymes participating in synthesis of a peptidoglikan which is an important component of a bacterial cell wall. Bacteria develop several types the penicillin-the connecting proteins (PCP). Penicillinic antibiotics suppress effect of one or more transpeptidases. Disturbance of synthesis of a peptiglikan leads ment of a defective cell wall which is osmotichno unstable and leads to death of a bacterial cell. Penicillin probably takes part in disturbance of a bacterial wall also by oppression of effect of inhibitor mureingidrolazy-enzyme which is associated with cell fission. Thus, amoxicillin is a bactericidal antibiotic. Time during which concentration of an antibiotic reaches the minimum overwhelming concentration (Т&gt, MPK) is very important factor for successful treatment of bacterial infections by means of a beta laktamnykh of antibiotics. At achievement of 40% of time of dosing the maximum clinical effect of amoxicillin can develop.
The antibacterial range of action
Amoxicillin is effective concerning gram-positive and some gram-negative microorganisms. In comparison with penicillin, amoxicillin is less effective concerning Streptococcus pyogenes, Streptococcus pneumoniae and Streptococcus agalactiae, however, more more effectively than penicillin concerning enterococci and Listeria monocytogenes. Effects of amoxicillin on gram-positive anaerobic bacteria and types of Neisseria same, as at penicillin. As beta lactamelements destroy amoxicillin, they are inefficient concerning the strains developing beta lactamelements and, therefore, do not affect the majority of strains of stafilokokk.
Strains of Haemophilus influenzae, Haemophilus parainfluenzae, E. coli, types of Salmonella. and Shigella which are not developing beta lactamelements are sensitive to amoxicillin. The majority of other gram-negative bacteria of a rezistentna to amoxicillin.
Table 1. Bacteria sensitive to amoxicillin *:

Streptococcus spp.
(except for S. pneumoniae)

* Methicillinum-resistant staphylococcus are also resistant to amoxicillin.
Amoxicillin resistance of bacteria
stability Development
Resistance of bacteria to some antibiotics can be acquired as a result of mutations or transfer of plasmids. Mechanisms of development of stability of bacteria, generally are as follows:
– hydrolysis of antibiotics
– inability of achievement of antibiotics of PSB
– change of PSB to degree of unfitness to connect by beta lactamelements penicillin.
Beta laktamazy hydrolyze cyclic amide communication beta laktamnogo rings of penicillin. There is a set beta laktamaz which are divided into several groups on the abilities to contact a beta laktamnymi antibiotics and on the content of amino acids. At gram-positive bacteria the beta lactamelements are allocated to the environment while at gram-negative bacteria, beta lactamelements are localized in periplazmatichesky space. The ability of bacteria beta lactamelements is most often connected by plasmids which easily pass from one bacterial cell to other bacterial cell and, thus transfer stability just seeing bacteria to another.
The mechanism of development of resistance of pneumococci to a beta laktamnym to anti-
biotics is change of one or several proteins with which the antibiotic is connected by a different way. The changed protein loses ability to connect several antibiotics, and not just penicillin. If several proteins change, strains are considered as very steady. In the corresponding doses, amoxicillin at oral administration is the most effective beta laktamnym an antibiotic for treatment of the noninvasive infections caused by intermediate and steady pneumococci.

The indications
of the Infection caused by the microorganisms sensitive to amoxicillin:
– an infection of upper parts of airways (average otitis, sinusitis,
pharyngitis, tonsillitis)
– infections of lower parts of airways (acute bacterial
bronchitis, exacerbation of chronic bacterial bronchitis, pneumonia)
– infections of urinogenital ways (urethritis, cystitis, pyelonephritis, a pyelitis,
an endometritis, a cervicitis, gonorrhea)
– infections of skin and soft tissues
– digestive tract infections (a salmonellosis, at sensitivity
of Salmonella typhi to amoxicillin)
– Helicobacter pylori eradikation in ulcer of stomach and duodenum
– a disease Laima (borreliosis)
– some other infections (a brucellosis, leptospirosis)
– prevention of a bacterial endocarditis at surgical interventions
in an oral cavity and upper airways

the Route of administration and doses
Hikontsil can be accepted irrespective of meal. Capsules should be swallowed entirely, washing down with a small amount of liquid. During treatment by Hikontsil, patients are recommended to drink more liquid, than usually.
The dose, frequency of reception and duration of treatment should be adjusted depending on a disease and a condition of the patient.
The adult
the Usual dose makes from 250 mg to 500 mg of Hikontsil three times a day or from 500 mg to 1000 mg twice a day. In heavy infections (sinusitis, pneumonia and other heavy infections) – from 500 mg to 1000 mg three times a day. A daily dose we can be increased, but no more, than up to 6 g.
Borreliosis (Lyme’s disease): 500–1000 mg 3 times a day. Hikontsil recommend to apply to Helicobacter pylori eradikation in a combination with others medicinal to means, 1000 mg of Hikontsil 2 times a day.
For 1 h before surgical intervention apply 3 g of Hikontsil to prevention of an endocarditis, in 6 h after surgical intervention – 1.5 g.
Patients with impaired renal function
Hikontsil can apply at patients with a renal failure. In a renal failure of heavy degree (clearance of creatinine & lt, 10 ml/min. and/or 0.16 ml / c) the interval between doses from 12 to 24 hours is recommended to increase.

Side effects
Often (from ≥1/100 to & lt, 1/10)
– diarrhea and nausea
– erythematic and makulopapulezny rash
not often (from ≥1/1.000 to & lt, 1/100)
– vomiting
– urticaria,
naggers Redko (from ≥1/10.000 to & lt, 1/1.000)
– heavy infections with steady microorganisms (the general disturbances,
reactions on the injection site)
It is very rare (& lt, 1/10.000)
– tranzitorny anemia, thrombocytopenia, an eosinophilia, a neutropenia
– anaphylactic reactions
– confusion of consciousness, a spasm (at the patients receiving very high
doses of drug)
– hallucinations
– stomatitis, an esophagitis, steady diarrhea (in pseudomembranous colitis
the treatment should be stopped)
– increase in level of transaminases and bilirubin, hepatitis, cholestatic
jaundice
– interstitial nephrite
– a bronchospasm
At emergence of heavy side effects drug treatment should be stopped.

Contraindications
– hypersensitivity to amoxicillin, other antibiotics
of a penicillinic row or other components of drug
– allergic reactions in the anamnesis, a pollinosis, bronchial asthma
– patients with an infectious mononucleosis and malignant
diseases of lymphatic glands (lymphosarcoma, a lymphocytic leukosis)
– children’s and teenage age up to 18 years
– phenylketonuria (disease of Fellinga)
– digestive tract diseases in the anamnesis (especially the colitis
connected with use of antibiotics)

Medicinal interactions
At simultaneous use, Hikontsil can reduce efficiency of some oral contraceptive means.
At the patients receiving Allopyrinolum along with amoxicillin more skin rash develops more often.
Simultaneous use with clavulanic acid enhances effect of amoxicillin.
The amoxicillin combination with other antibiotics
is not recommended to combine amoxicillin with bacteriostatic antibiotics (macroleads, tetracyclines) and with others a beta – laktamny antibiotics (cephalosporins, monobaktama, penema).
Antibiotics with bacteriostatic action reduce efficiency of amoxicillin. At a concomitant use of amoxicillin with a methotrexate the toxicity of a methotrexate increases.
At the combined use with amoxicillin the effect of anticoagulants amplifies that can cause bleeding.
During treatment by amoxicillin false positive results of reaction of Koombs and definition of concentration of glucose in urine are possible.
Simultaneous use of a probenetsid increases amoxicillin level
in bile. Probenetsid suppresses canalicular secretion.
Amoxicillin can be combined with aminoglycosides. The combination works synergy. Amoxicillin can also be applied along with hinolona.

Special instructions
there Is a likelihood of development of cross hypersensitivity to penicillin, other β-laktamny antibiotics and cephalosporins though similar cases observe very seldom. In case treatment by amoxicillin leads to allergic reaction, it is necessary to cancel reception of an antibiotic and to carry out the corresponding therapy.
During treatment, changes in indestinal flora can happen amoxicillin. It can lead to increase in quantity of Clostridium difficile and development of pseudomembranous colitis. In that case use of amoxicillin needs to be stopped and carried out the corresponding treatment. Also the quantity of fungal microorganisms, especially in a vagina can increase. Patients with an infectious mononucleosis or a malignant disease of lymphatic glands at Hikontsil’s use have a skin rash more often.
Patients with a renal failure should take drug with caution. In the profound renal failure recommend to increase an interval between doses, according to recommendations about a route of administration.
Pregnancy and the period of a lactation
It is established that amoxicillin does not make harmful effects on a fruit. This drug can be used during pregnancy, but at the same time it is necessary to weigh expediency of such treatment carefully.
The insignificant amount of drug gets into breast milk, but, despite this, Hikontsil it is possible to apply during feeding by a breast with care.
The feature of influence of medicine on ability to run the vehicle or potentially dangerous
Hikontsil mechanisms does not affect ability of control of vehicles and work with mechanisms.

Simtoma’s overdose: nausea, vomiting, diarrhea, crystalluria, increase in excitability of the central nervous system, confusion of consciousness, spasm.
Treatment: symptomatic therapy. Usually at patients with normal function of kidneys of complications does not arise on condition of the use of enough liquid. In a renal failure for removal of amoxicillin the hemodialysis is recommended.

To Store storage conditions in original packing at a temperature not over 25 ºС, in the place protected from light.
To store out of children’s reach!