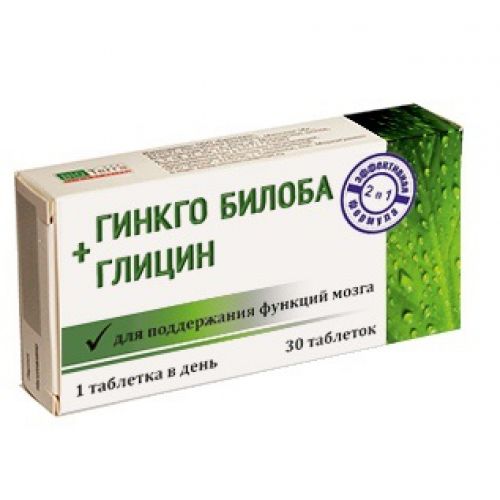 Dietary supplement of the Ginkgo of a bilob + glycine of 200 mg No. 30 of the tablet LOAD BRAINS! Be SUCCESSFUL! Content of active agents in one tablet: ginkgo extract biloba-40 mg, glycine – 40 mg For whom is intended to dietary supplement ‘A ginkgo of a bilob + glycine’? for the people occupied with intensive brainwork: the pupils, managers, heads, developers of design documentation and software, people enduring a stress, the elderly people suffering from various manifestations of cerebral atherosclerosis – a disease which affects arteries of a brain and is one of the types of weak-mindedness, people having problems with impairment in memory, attention, mental capacities for those who are disturbed by regular dizzinesses and headaches, sleep disorders. Effect of dietary supplement ‘+ glycine’ is based by a ginkgo of a bilob on a combination of properties of the components which are its part. High content of flavonovy glycosides in extract of leaves of a ginkgo of a bilob causes powerful antioxidant and angioprotektorny action of this plant. Thanks to exclusive specific properties, extract of a ginkgo of a bilob helps to expand blood vessels, without effort increasing elasticity of their walls. Especially It should be noted influence of regular intake of extract of a ginkgo of a bilob on improvement of blood supply of a brain that promotes concentration of attention, development of thinking and elimination of problems with memory. The ginkgo of a bilob also has positive impact on the growing old organism, including on behavioural and psychoemotional disturbances which, as a rule, are followed by insufficiency of vessels of a brain. Regular intake of dietary supplement ‘A ginkgo of a bilob + glycine’ promotes elimination of dizziness and headaches. Glycine is one their protozoa and the major amino acids in a human body. It is necessary for implementation of various functions of an organism, including synthesis of nucleic acids and other amino acids and also production of growth hormone. Glycine improves exchange processes in a brain therefore it is recommended to be accepted at reduced working capacity, including, intellectual. It improves a condition of the people enduring stressful situations – such as divorce proceedings, work on very responsible project, examinations and so on. For treatment of sleep disorders it is recommended to accept glycine in 20 minutes before going to bed. Glycine causes inflow of forces and increases endurance because it is one of the few amino acids which are capable to optimize utilization of sugar in an organism. Besides, glycine works as a brake neurotransmitter, having the calming effect on a brain. Glycine is necessary for normal functioning of the central nervous system, it is used in treatment of bipolar disorders, by hyperactivities and epilepsies.