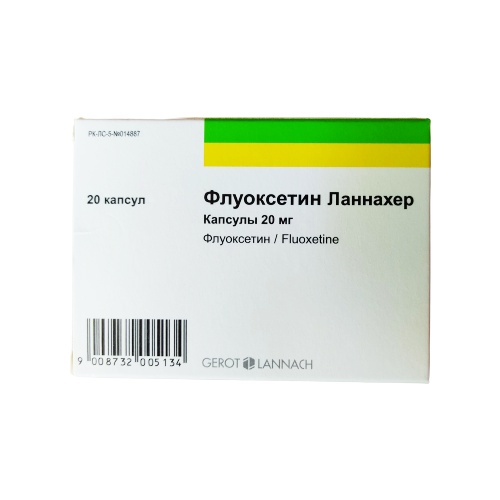 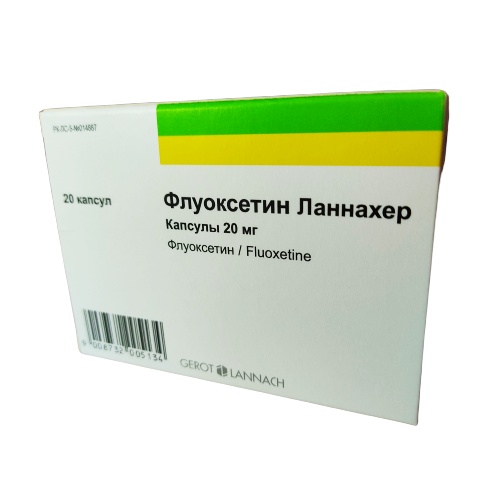 This medication may improve your mood, sleep, appetite, and energy level and may help restore your interest in daily living. It may decrease fear, anxiety, unwanted thoughts, and the number of panic attacks.

It may also reduce the urge to perform repeated tasks (compulsions such as hand-washing, counting, and checking) that interfere with daily living.

Fluoxetine may lessen premenstrual symptoms such as irritability, increased appetite, and depression. It may decrease binging and purging behaviors in bulimia.

One capsule contains the active substance – fluoxetine hydrochloride, equivalent to 20 mg of fluoxetine

Fluoxetine Lannacher is taken orally, without chewing, once a day, regardless of food intake, with a sufficient amount of liquid.

For depression, the initial dosage is 20 mg / day 1 time, in the morning. If after 3-4 weeks of continuous administration there is no clinical effect, the dose should be increased to 20 mg 2 times a day (morning and afternoon), the maximum daily dose is 80 mg / day. Duration of use is at least 6 months.

In patients with renal and hepatic insufficiency, as well as in elderly patients, the dose of Fluoxetine should be reduced.

When combined with phenytoin, changes in blood counts and toxic manifestations are observed. Concomitant use should be accompanied by careful selection of the dose of the concomitant drug and monitoring of the clinical condition.

Use with triptan carries an additional risk of coronary vasoconstriction and hypertension.

Since the metabolism of fluoxetine includes hepatic cytochrome CYP2D6, concomitant therapy with drugs that are also metabolized with the participation of this enzyme leads to drug interactions and requires a decrease in their dose. This is also required if fluoxetine has been used in the previous 5 weeks.

Patients receiving warfarin therapy should be monitored for coagulation when fluoxetine is prescribed or discontinued.
When using fluoxetine in conjunction with electroconvulsive therapy (ECT), lengthening of attacks is possible.

There may be a pharmacodynamic interaction between fluoxetine and an herbal remedy (St. John’s wort), which can lead to an increase in unwanted effects.

Drinking alcohol is not allowed during treatment with fluoxetine.

Antidepressants should be used with caution in patients with mania / hypomania. As with any antidepressant, fluoxetine should be discontinued when the stage of mania occurs.

A reduced dose is recommended in patients with significant hepatic dysfunction.

Use with caution in acute coronary syndrome.

There are reports of prolonged convulsions in patients receiving fluoxetine and electroconvulsive therapy, therefore, it is used with caution.

There is a danger of developing serotonin syndrome when used together with herbal preparations containing St. John’s wort or when combined with other serotonergic drugs (among other L-tryptophan) and / or antipsychotics.
Features of the effect of the drug on the ability to drive a vehicle or potentially dangerous machinery: Patients should refrain from driving a car or dangerous equipment until there is firm confidence that their ability to concentrate has not deteriorated.

Store at a temperature not exceeding 25 ° C, in a dry, dark place.
Keep out of the reach of children!

Shelf life – 3 years
Do not use the drug after the expiration date.