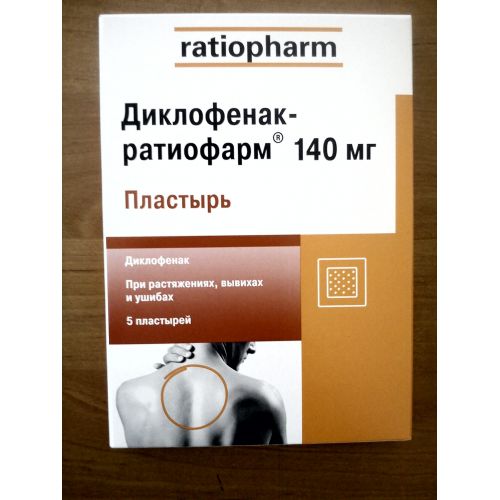 of Diklofenak-ratiopharm medicine of 140 mg

the Trade name
of Diklofenak-ratiopharm of 140 mg

The description
the Plaster with the white or light brown paste applied with a uniform layer on not braided fabric and covered with the removed protective film.

Pharmacokinetics Later properties of skin drawing diclofenac is slowly released. Average concentration of the plateau make about 3 ng/ml. Linking with proteins of blood plasma makes 99%. Diclofenac is exposed to hydroxylation and linking with glucuronic acid. Removal of diclofenac happens on 2/3 through kidneys, on 1/3 to bile.

A pharmacodynamics
of Diklofenak-ratiopharm of 140 mg are a non-steroidal anti-inflammatory drug (NPVS). Has anti-inflammatory, analgeziruyushchy effect. The mechanism of action consists in suppression of synthesis of prostaglandin and release of mediators of inflammation. Diclofenac reduces the pain caused by inflammation, hypostasis and temperature increase.

the Route of administration and doses
For use on skin. Only for external use! Not to accept inside!
Make an incision a bag of the plasters containing biologically active agent along marking. Take out a plaster and again carefully close a bag, having pressed on the locking system. Remove a protective film from a sticky surface of a plaster. Paste a plaster on the place feeling pain. If necessary it can be recorded by means of an elastic mesh bandage. The plaster is not allowed to be applied with an occlusive bandage.
A dosage
At adults 2 times a day, in the morning and in the evening. As a rule, there is enough use within 1 week.
Diklofenak-ratiopharm 140 mg are not recommended for treatment of children 16 years as for this age group there is no sufficient experience are younger.

The contraindication
– the increased susceptibility to diclofenac or one of medicine components (propylene glycol or butyl hydroxytoluene)
– the patients who transferred asthma attack, a small tortoiseshell or acute rhinitis to which treatment acetylsalicylic acid or others nonsteroid anti-inflammatory drugs (NPVS)
– a peptic ulcer in an active stage
– use on open wounds was applied, in burns skin infections or eczema
– pregnancy the third trimester
– children’s age up to 16 years

The special
indications Diklofenak-ratiopharm of 140 mg are not allowed to be applied on damaged (scratches, cut wounds, burns, eczema) or the infected skin and also on mucous membranes and with an occlusive bandage.
At complications which remain longer than 3 days it is necessary to see a doctor.
Diklofenak-ratiopharm 140 mg it has to be applied with care the patients having bronchial asthma who have asthma attacks, urticaria or acute rhinitis were caused by acetylsalicylic acid or other NPVS, patients with renal failures, heart or a liver and also a round ulcer or inflammations of intestines or hemorrhagic diathesis in the anamnesis, at elderly patients. At appearance of skin rash the treatment has to be stopped. It is necessary to avoid impact of direct sunshine or a sunbed on the processed zone within one hour after removal of a plaster for reduction of risk of photosensitivity.
The plaster contains polypropylene and butyl hydroxytoluene. Polypropylene can cause skin irritations. Butyl hydroxytoluene can cause locally skin reactions (for example, contact dermatitis), irritations of eyes and mucous membranes.
Pregnancy and the period of a lactation
of Diklofenak-ratiopharm of 140 mg can be used only during the first and second trimesters of pregnancy after careful comparison of advantage and risk. The minimum quantity of diclofenac and its metabolites is distinguished in breast milk. Due to the lack of the by-effects known for the baby, there is no need for feeding interruption by a breast during short-term use of drug. Nevertheless, the plaster Diclofenac cannot be applied directly on area of a breast.
Feature of influence on ability of driving or potentially dangerous
Diklofenak-ratiopharm mechanisms of 140 mg does not make negative impact on ability to driving of the car and to use of cars.

Overdose
it was not reported about any cases of overdose. In case of considerable systemic side effects at the wrong use or accidental overdose (for example, at children) it is necessary to take the precautionary measures provided in intoxication by non-steroidal anti-inflammatory drugs.

A form of release and packing
Plasters on 5 pieces in the welded, again closed bag from paper, polyethylene of low density, aluminum, a kopolimer of ethylene and methacrylic acid. 1 or 2 bags together with the instruction for medical use in the state and Russian languages in a box of cardboard.

To Store storage conditions out of children’s reach at a temperature not above 25 °C.
Store in original packing! You store a package densely closed.

A period of storage
In not opened packing of 30 months. After packing opening 4 months.
Not to apply after expiry date!

the Owner of the registration certificate
ratiopharm GmbH, Ulm, Germany
the Address of the organization accepting in the territory of the Republic of Kazakhstan claims from consumers on quality of products (goods) of ratiopharm Kazakhstan LLP, 050040, Almaty, Al-Farabi Ave., 19, BC Nurly-Tau, 1B, office 603. Phone number: (727) 3110915, Fax: (727) 3110734, e-mail: Safety.Kazakhstan@tevapharm.com