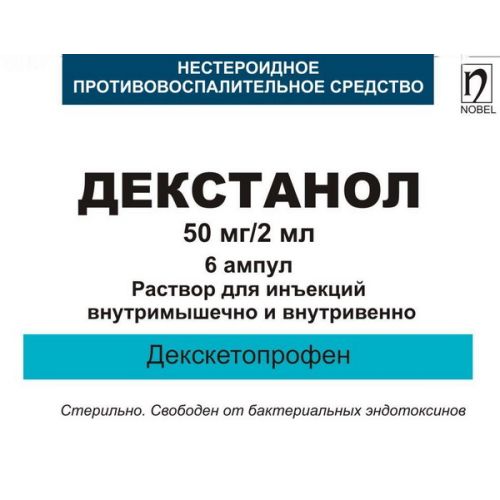 Structure
One ampoule contains
active agent – a deksketoprofen trometamol 73.80 mg (it is equivalent to a deksketoprofen of 50 mg),
excipients: sodium chloride, sodium hydroxide, alcohol of 96%, water for injections

Pharmacokinetics Peak Plasma Concentration properties (26.4+5.4 mkg/ml) is reached in 4-5 minutes after intravenous infusion, through 20 minutes – after an intramuscular injection and remains within 2 hours.
The bioavailability is 90% and increases consistently with increase in a dose of drug. Deksketoprofen for 99% contacts proteins of blood plasma, mainly albumin fraction. The volume of distribution is 0.25 l/kg.
In synovial fluid the concentration of a deksketoprofen reaches 50% of plasma concentration (1.5 mkg/ml), is brought out of synovial fluid slowly – within 24 hours.
Is exposed to metabolism in a liver where it conjugates with glucuronic acid. About 80% of a deksketoprofen are allocated with urine, mainly in the form of a conjugate with glucuronic acid. Less than 10% are removed in not changed view with a stake. Elimination half-life of a deksketoprofen varies from 1 to 2.7 hours. At patients with a renal failure deksketoprofen it is removed more slowly, and its elimination half-life lasts for 1 hour.

DEKSTANOL pharmacodynamics, solution for injections, possesses the anti-inflammatory, anesthetizing and febrifugal action and enters into group of non-steroidal anti-inflammatory drugs.
The mechanism of effect of drug is connected with decrease in prostaglandinovy synthesis by inhibition of biosynthesis of prostaglandins and leukotrienes due to suppression of activity of enzyme of cyclooxygenase (cyclooxygenase-1 and cyclooxygenase-2) which catalyzes synthesis of prostaglandins from arachidonic acid. Ketoprofen stabilizes a liposomal membrane, renders the braking effect on synthesis of leukotriene and has antibradikininovy activity.
The clinical trials conducted on several painful models showed analgeziruyushchy action deksketoprofen a trometamola. During the researches, analgeziruyushchy effect of drug was fast, and the peak of analgeziruyushchy effect was shown within the first 45 minutes. Duration of analgesic effect after introduction of 50 mg of a deksketoprofen usually is 8 hours.

A route of administration and doses
For intravenous and intramuscular administration.
Adults:
Contents of one ampoule of Dekstanol (2 ml) are entered by a slow injection deeply into a muscle by each 8-12 hours. If necessary, administration of drug can be carried out each 6 hours. The general dose should not exceed 150 mg a day.
Dekstanol is appointed to the short period of treatment and is limited only to the acute symptomatic period (no more than two days). Patients whenever possible have to pass to oral analgetics.
The recommended daily dose of Dekstanol for intravenous injections makes 100 – 150 mg and should not exceed 150 mg. For intravenous injection it is necessary to dissolve contents of one ampoule (2 ml) of Dekstanol in 100 ml of solution of sodium of chloride and to enter within 10-30 minutes each 8-12 hours. Solution has to be prepared in sterile conditions, is protected from hit of direct sunshine because of photosensitivity of drug and applied right after preparation.

Side effects
Often:
– nausea and/or vomiting
– pains in the injection site of drug, local reactions in the field of an injection, including inflammation, bruises or bleedings
Sometimes:
– anemia
– insomnia
– headaches, dizzinesses, drowsiness
– illegibility of sight
– hypotension, hyperaemia
– abdominal pain, diarrhea, dyspepsia, a konstipation, a hematemesis, dryness in an oral cavity
– dermatitis, a skin itching, rash, the increased sweating
– a hyperthermia, fatigue, pains, a fever
Seldom:
– a laryngeal edema
– a hyperglycemia, a hypoglycemia, a gipertriglitseridemiya, anorexia
– paresthesia, faints
– a ring in ears
– disturbance of warm activity (extrasystole, tachycardia)
– disturbance of activity of a cardiovascular system (hypertensia, thrombophlebitis)
– disturbances from the respiratory system, bodies of a thorax and mediastinum (bradipnoe)
– a round ulcer, bleeding of a round ulcer, a perforation of a round ulcer, a stomacace, exacerbations of colitis and Crohn’s disease
– hepatitis, a bilious attack
– allergic rash, eels
– muscle tension, constraint in joints, muscular spasms, dorsodynias
– an acute renal failure, a polyuria, pains in kidneys, a ketonuria, a proteinuria
– disturbance of a menstrual cycle, prostatic disturbances
– a shiver and peripheral hypostasis
– disturbance of functional trials of a liver
is Very rare:
– a neutropenia, thrombocytopenia, a purpura, aplastic and hemolytic anemia, an agranulocytosis, a marrow hypoplasia
– reaction of an anaphylaxis, including an acute anaphylaxis
– a bronchospasm, breath difficulty
– pancreatitis, gastritis
– hepatocellular damages
– Stephens’s syndrome – Johnson, a toxic necrolysis (Lyell’s disease), a Quincke’s edema, a face edema, photosensitivity
– nephrite or a nephrotic syndrome
– a myocardial infarction or a stroke, increase in risk of developing arterial thrombosis

of the Contraindication
– hypersensitivity to a deksketoprofen and salicylates or auxiliary components of drug
– a peptic ulcer of a stomach and duodenum in an aggravation phase
– gastrointestinal bleedings or other forms of active bleedings
– heavy abnormal liver functions and kidneys (clearance of creatinine & lt, 50ml/mines)
– inflammatory bowel diseases in an aggravation phase, Crohn’s disease
– hemorrhagic diathesis and other disturbances of fibrillation
– bronchial asthma
– pregnancy and the period of a lactation
– heart failure
– children’s age up to 18 years

Overdose
Symptoms of overdose of drug are not known. The overdose by similar drugs is expressed in gastrointestinal (vomiting, lack of appetite, pain in a stomach) and neurologic (drowsiness, dizziness, a disorientation, a headache) disturbances.
Treatment: at accidental overdose or reception of too high dose it is necessary to begin immediately symptomatic treatment according to a condition of the patient. At reception more 5mg/kg the adult or the child it is necessary to give within an hour inside activated carbon.
Deksketoprofena trometamol leaves from an organism by means of dialysis.

The form of release and packing
On 2 ml of drug place in an ampoule from dark glass with the line for a break. Apply the text on an ampoule with method of an intaglio printing the fast fixed paint.
On 6 ampoules together with the instruction for medical use in the state and Russian languages place in a pack from cardboard with the hologram of firm – producer.