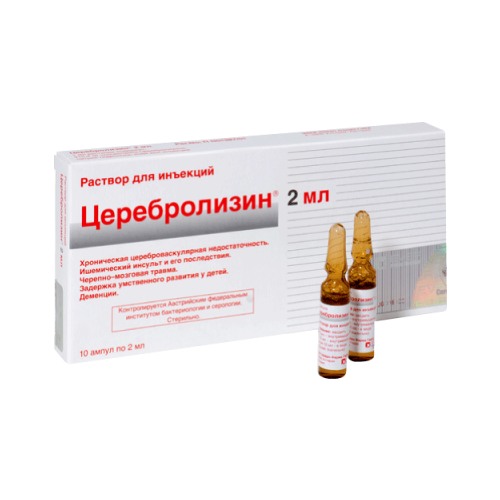 Active ingredient – Cerebrolysin concentrate (a complex of peptides derived from the brain of a pig) 215.2 mg,
Excipient – water for injection

The complex composition of Cerebrolysin®, the active fraction of which consists of a balanced and stable mixture of biologically active oligopeptides with a total polyfunctional effect, does not allow for the usual pharmacokinetic analysis of individual components. After a single injection, the neurotrophic activity of Cerebrolysin® is fixed in the blood plasma for up to 24 hours.

Cerebrolysin® contains low molecular weight biologically active neuropeptides that penetrate the blood-brain barrier and directly reach nerve cells. The drug has an organ-specific multimodal effect on the brain, that is, it provides metabolic regulation, neuroprotection, functional neuromodulation and neurotrophic activity.

Metabolic regulation: Cerebrolysin® increases the efficiency of aerobic energy metabolism in the brain, improves intracellular protein synthesis in the developing and aging brain.

Functional neuromodulation: Cerebrolysin® has a positive effect on cognitive impairment, on the processes of remembering and reproducing information, activates the process of mental activity, improves mood, promotes the formation of positive emotions, thus exerting a modeling effect on behavior.

Organic, metabolic and neurodegenerative diseases of the brain, in particular senile dementia of the Alzheimer type – post-stroke complications

It is possible to prescribe single doses, the value of which can reach 50 ml, but course therapy is more effective.

The recommended optimal course of treatment includes daily use for 10-20 days.

To improve the effectiveness of treatment, repeated courses can be carried out until positive results of treatment are obtained. After the first course, the frequency of prescribing doses can be reduced to 2 or 3 times a week. Breaks between courses of therapy should be of the same duration as the courses of treatment themselves.

Simultaneous administration of Cerebrolysin® with vitamins and drugs that improve cardiac circulation is allowed, however, these drugs should not be mixed in the same syringe with Cerebrolysin®.

Use only a clear amber solution and only once.

If Cerebrolysin® is administered through a long-term infusion catheter, the system must be flushed with saline sodium chloride solution before and after use.

– with excessively rapid administration, in rare cases, a feeling of heat, sweating is possible

Since Cerebrolysin® is used to treat the elderly, and the above undesirable effects are typical for this patient population, these phenomena may not be associated with the use of Cerebrolysin®.

The simultaneous use of antidepressants or monoamine oxidase inhibitors in combination with Cerebrolysin® may cause an increase in their action.

Cerebrolysin® and balanced amino acid solutions should not be mixed in the same solution for infusion.

With caution, the drug is prescribed for allergic diathesis, large convulsive seizures.

The results of in vitro studies showed no signs of reproductive toxicity. Clinical studies involving pregnant and lactating women have not been conducted.

The use of Cerebrolysin® during pregnancy and during breastfeeding is possible only after a thorough analysis of the ratio of the positive effect of treatment and the risk associated with the use of the drug.

The drug does not reduce the reaction and attention when driving vehicles and operating mechanisms.

To date, no cases of overdose or intoxication have been noted.

Store in a dark place, in the manufacturer’s packaging, at a temperature not exceeding 25°C.
Keep out of the reach of children!

Shelf life – 5 years
Do not use after the expiration date 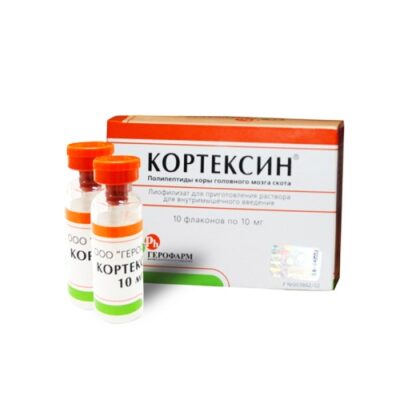