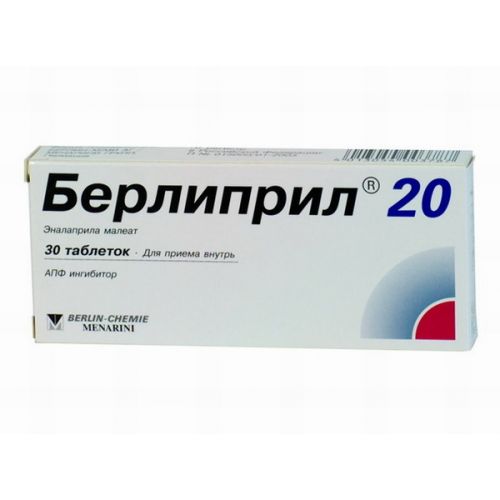 name Enalapril Dosage Form
of the Tablet of 20 mg

10 mg/day once or for 2 receptions

20 mg/day once or for 2 receptions
* to observe special precautionary measures in case of patients with a renal failure or being on treatment by diuretics.
Till the beginning of therapy it is necessary to carry out by the drug Berlipril® careful control of arterial blood pressure and renal function as it was reported about hypotonia (less often) about the subsequent renal failure. For the patients who are on treatment by diuretics follows – if it is possible – before an enalapril initiation of treatment a maleate to reduce a dose of these drugs. Hypotonic reaction at the beginning of therapy of Berliprilom® does not mean that such reactions will take place and at long-term treatment by drug, and does not exclude the further Berlipril® drug treatment. Also it is necessary to carry out control of level of serumal potassium and renal function.
A dosage at restriction of function of kidneys
in principle, intervals between intake of enalapril of a maleate it is necessary to extend and/or reduce its dose.

Clearance of creatinine
(Kr-Cl) of ml/min.

the Initial dose
of mg/day

ml/min. 2.5 mg in day of carrying out dialysis *
* see the section “Special instructions: patients who are on treatment by a hemodialysis method”.

Enalapril gives in to dialysis. In the days free from carrying out dialysis, the dose depends on degree of a lowering of arterial pressure.
Use by elderly patients
the Dose should be selected depending on a condition of renal function of the patient.

Side effects
Very often (³ 1/10)
– a disorder of vision, in the form of illegibility of sight
– dizziness
– cough
– nausea
– an asthenia
Often (from ³ 1/100 to & lt, 1/10)
– a headache, a depression
– hypotonia (including orthostatic hypotonia), a faint, thorax pain, disturbances of a warm rhythm, stenocardia, tachycardia
– short wind
– diarrhea, an abdominal pain, change of flavoring perception
– rash, hypersensitivity / a Quincke’s disease (it was reported about a Quincke’s disease with involvement of the face, extremities, lips, language, voice folds and/or throats)
– fatigue
– a hyperpotassemia, increase in level of serumal creatinine
Sometimes (from ³ 1/1000 to & lt, 1/100)
– anemia (including aplastic and hemolytic anemia)
– a hypoglycemia, increase in level of urea of serum, a hyponatremia
– confusion of consciousness, drowsiness, insomnia, nervousness, paresthesias, dizziness
– orthostatic hypotonia, heartbeat, a myocardial infarction or a cerebral stroke, presumably as a result of excessive falling of arterial blood pressure at patients with presence of high risk factors
– a rhinorrhea, a sore throat and an osiplost, bronchospasm/asthma
– intestinal impassability, pancreatitis, vomiting, dyspepsia, a constipation, lack of appetite, the phenomenon of irritation of a stomach, dryness in a mouth, a round ulcer
– perspiration, an itching, a small tortoiseshell, an alopecia
– disorders of renal function, a renal failure, a proteinuria
– impotence
– muscular spasms, inflows, sonitus, discomfort, fever
– increase in level of urea of serum, a hyponatremia
Seldom (from ³ 1/10000 to & lt, 1/1000)
– a neutropenia, decrease in hemoglobin and a hematocrit, thrombocytopenia, an agranulocytosis, increase in level of liver enzymes, increase in indicators of bilirubin of serum, oppression of marrow, a pancytopenia, increase in lymph nodes, autoimmune diseases
– change of nature of dreams, sleep disorders
– Reynaud’s syndrome
– pulmonary infiltrates, rhinitis, an allergic alveolitis / eosinophilic pneumonia
– stomatitis / aphthous sores, a glossitis
– a liver failure, hepatitis (hepatocellular or cholestatic), including necrosis, a cholestasia (including jaundice)
– a multiformny erythema, Stephens-Johnson’s syndrome, exfoliative dermatitis, a toxic epidermal necrolysis, a bladderwort, an erythrosis
– an oliguria
– a gynecomastia
– increase in level of liver enzymes, increase in indicators of bilirubin of serum
is Very rare: & lt, 1/10.000
– a Quincke’s disease of intestines.
It is unknown: on the available data does not give in to assessment.
– A syndrome of disturbance of secretion of antidiuretic hormone
It was reported about symptom complex which can be followed by some or all from the following side effects: fever, serositis, vasculitis, myalgia/miositis, arthralgia/arthritis, increase in a caption of anti-nuclear antibodies, increase by SOE, eosinophilia and leukocytosis. Skin rash, a photosensitization or other skin manifestations can take place.

Contraindications
– the increased sensitivity to enalapril to a maleate, other components of drug, other inhibitors of angiotensin-converting enzyme (IAPF)
– existence in the anamnesis of the angioneurotic hypostasis connected with the previous therapy of IAPF
– a hereditary or idiopathic Quincke’s disease
– pregnancy
– hypersensitivity to lactose (lactose intolerance, deficiency of Lappa lactose or malabsorption of glucose galactose)
– children’s and teenage age up to 18 years

Medicinal interactions
Kaliysberegayushchy diuretics or drugs
of IAPF potassium reduce the potassium losses caused by diuretics. Kaliysberegayushchy diuretics (for example, Spironolactonum, eplerenon, Triamterenum or amiloride), can lead drugs of potassium or kaliysoderzhashchy substitutes of salt to significant increase in level of potassium in serum. If because of the revealed hypopotassemia the simultaneous use nevertheless is shown, then it should be done with care and at frequent control of level of serumal potassium.

The Previous treatment by diuretics in high doses can lead diuretics (a tiazidovy row or loopback diuretics) at the beginning of enalapril therapy by a maleate to a hypovolemia and, thus, increase risk of developing hypotension. The hypotensive effect can be reduced if to cancel diuretic, to fill a lack of liquid and salts of an organism or to begin enalapril therapy with a maleate (from its low doses).
Other antihypertensives
Simultaneous use with other antihypertensives can enhance hypotensive effect of enalapril of a maleate. Simultaneous use with nitroglycerine and other nitrates or other vazodilatator can also lead to a further lowering of arterial pressure.
Lithium
It was reported about passing increase in concentration of lithium in serum and about its toxic effects at simultaneous use with IAPF. At simultaneous treatment by diuretics of a tiazidovy row and IAPF concentration of lithium in serum can increase that can cause intoxication lithium. Therefore combined use of enalapril of a maleate and lithium do not recommend if this combination nevertheless is necessary, then careful control of level of serumal lithium is necessary.
Tricyclic antidepressants / neuroleptics / means for anesthesia / anesthetic
the Simultaneous use of IAPF with certain means for carrying out an anesthesia, tricyclic antidepressants and neuroleptics can strengthen a lowering of arterial pressure.
Non-steroidal anti-inflammatory drugs (NPVLS)
Long-term treatment of NPVLS can weaken hypotensive action of IAPF.
Effects of NPVLS, including, so-called, TsOG-2 inhibitors (selection inhibitors of cyclooxygenase-2) and IAPF concerning increase in level of serumal potassium develop and can lead to deterioration in renal function. This phenomenon is, usually, reversible. Occasionally the acute renal failure – especially, at patients with decrease in renal function, at such, e.g., as elderly patients or patients with decrease in amount of liquid in an organism can take place (for example, in the result of treatment with diuretics). As in an initiation of treatment along with the specified drugs, and periodically after the end of treatment, it is necessary to provide the corresponding intake of liquid in an organism and control of function of kidneys.
Gold drugs.
It was in rare instances reported about nitritoidny reactions (symptoms: face reddening, nausea, vomiting and arterial hypotension) at use of injection drugs of gold (sodium aurotimalat) together with APF inhibitors, including with Berliprilom®.
Sympathomimetics
Sympathomimetics can weaken hypotensive action of IAPF.
Antidiabetic medicines
indicate Results of epidemiological researches possible strengthening of hypoglycemic action of antidiabetic means (insulin, oral hypoglycemic means) at simultaneous use of IAPF, at the same time there is a risk of development of a hypoglycemia. Obviously, such cases take place, in particular, in the first weeks of the combined treatment and also at patients with decrease in renal function.
Alcohol
Alcohol enhances hypotensive effect of IAPF.
Acetilsalicylic acid, thrombolytic means and beta-blockers
of Berlipril® it is possible, without being afraid, to appoint along with acetilsalicylic acid (in cardiological doses), thrombolytic means and beta-blockers.