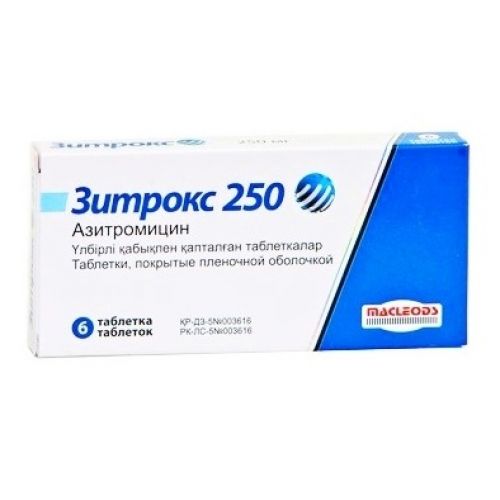 Pharmacokinetics At properties intake drug is well soaked up and quickly distributed on all organism. Gets in cells, including phagocytes which migrate in the inflammation center, promoting creation of therapeutic concentration of drug in the place of an infection. In 12-72 hours in the place of inflammation high therapeutic concentrations (1-9 mg/kg) exceeding the minimum overwhelming concentration for contagiums are created. Possesses long elimination half-life and it is slowly brought out of fabrics (on average 60–76 hours). The specified properties define a possibility of single dose of drug in day and the short mode of dosing (3 days) providing 7 – a 10-day course of treatment. It is metabolized generally in a liver, metabolites are not active. Gets through a placenta. Drug generally with bile in not changed look is emitted, a small part is removed by kidneys.
The pharmacodynamics
of Zitroks possesses a wide range of antimicrobic action. Communicating with 50S-cybjedinitsey ribosomes, suppresses biosynthesis of proteins of a microorganism. In high concentrations renders bactericidal effect. It is active concerning a number of gram-positive bacteria: Streptococcus pneumoniae, S. pyogenes, S. agalactiae, S. viridans, streptococci of group C, F and G, Staphylococcus aureus, S. epidermidis. He has effect on the gram-positive bacteria resistant to erythromycin. It is effective concerning gram-negative microorganisms: Haemophilus influenzae, H. parainfluenzae and N. of ducreyi, Moraxella catarrhalis, Bordetella pertussis and V. of parapertussis, Neisseria gonorrhoeae and N. meningitidis, Brucella melitensis, Helicobacter pylori, Gardnerella vaginalis. It is active concerning Campylobacter jejuni, some anaerobic microorganisms: Clostridium perfringens and also Micobacteria avium complex, Besides, is effective concerning intracellular and other microorganisms, including: Legionella pneumophila, Chlamydia trachomatis and S. of pneumoniae, Mycoplasma pneumoniae, Ureaplasma urealyticum, Listeria monocitogenes, Borrelia burgdorferi, Treponema pallidum.

Route of administration and doses
Inside, 1 time a day, for an hour to food or in two hours after a meal.
Tablets should be swallowed entirely.
In an infection of upper and lower airways, skin and soft tissues (except for the chronic migrating erythema): adult: 500 mg once a day within 3 days (course dose of 1.5 g),
to children are more senior than 6 years: at the rate of 10 mg/kg of body weight once a day within 3 days (course dose of 30 mg/kg).
At the chronic migrating erythema: adult: 1 time a day within 5 days: the 1st day – 1.0 g (2 tablets on 500 mg), then from the 2nd to 5 day – on 500 mg (course dose of 3.0 g),
children is more senior than 6 years: in the 1st day – in a dose of 20 mg/kg of body weight and then from 2 to the 5th day – daily in a dose of 10 mg/kg of body weight (course dose of 30 mg/kg).
In the diseases of a stomach and a 12-perstny gut associated with Helicobacter pylori:
1 g (2 tablets on 500 mg) in day within 3 days in combination with anti-secretory means and other medicines.
In infections, sexually transmitted: an uncomplicated urethritis / cervicitis – 1 g once complicated it is long the proceeding urethritis/cervicitis caused by Chlamydia trachomatis – on 1 g three times for a course at an interval of 7 days (in 1, 7 and 14 day). Course dose of 3 g.

Contraindications
– hypersensitivity to azithromycin, erythromycin or other antibiotics of group of macroleads
– a concomitant use of drugs of an ergot
– the I trimester and the period of a lactation
– heavy abnormal liver functions and kidneys
– arrhythmia
– children’s age up to 6 years (for a dose of 500 mg – 12 years)

– the passed dose it is necessary to accept special instructions in case of the admission of reception of one dose of drug as soon as possible, and the subsequent – with breaks at 24 o’clock.
In slight and moderate abnormal liver functions and kidneys and also the patient, it is necessary to appoint drug with care with cardiovascular pathology. Administration of drug can provoke an arrhythmia attack (ventricular arrhythmias and lengthening of an interval of QT are possible).
Pregnancy
Use at pregnancy II and III trimester is possible only in cases when the expected advantage for mother considerably exceeds possible risk for a fruit.
The feature of influence of medicine on ability to run transport or potentially dangerous mechanisms
during treatment needs to be careful during the driving of motor transport and occupation other potentially dangerous types of activity demanding the increased concentration of attention and speed of psychomotor reactions.

To Store storage conditions in the dry place protected from light at a temperature not over 250C.
To store out of children’s reach!

The name and the country of the owner of the registration certificate
of Macleods Pharmaceuticals Limited, India

the Name and the country of the organization of the packer
of Macleods Pharmaceuticals Limited, India

the Address of the organization accepting in the territory of the Republic of Kazakhstan claims from consumers on quality of products
Representation of “Macleods Pharmaceuticals Limited” in RK
Almaty, Makatayev St. 117, Body “B”, the 4th floor, office
37 Ph./fax. +7 727 3562832
E-mail: