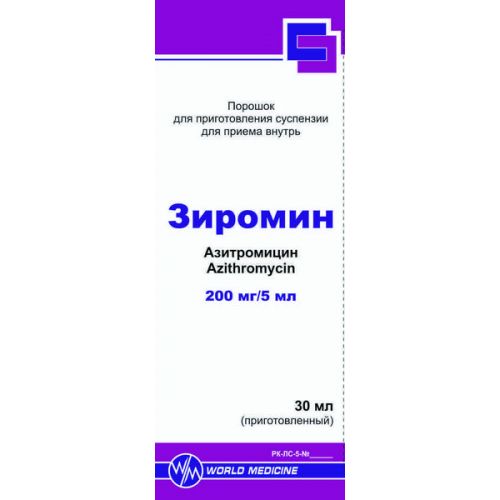 Ziromin suspension is taken orally, once a day, 1 hour before or 2 hours after a meal.

The dose and duration of treatment is set according to age, weight and course of the disease.

Children and adolescents weighing more than 45 kg, adults and the elderly

For children weighing more than 45 kg and adults, including elderly patients, the total dose of Ziromin is 1500 mg, which should be taken within three days (500 mg once a day).

For uncomplicated genital infections (chlamydia), a single single dose of 1000 mg is recommended. For susceptible strains of gonococcal infection, the recommended dose is 1000 mg or 2000 mg of Ziromin in combination with 250 mg or 500 mg of ceftriaxone (in accordance with the current guidelines for the use of antibacterial drugs). For patients allergic to penicillin and / or cephalosporins, the appointment should be consulted with a physician and in accordance with local treatment guidelines.

There is no information on the use of azithromycin in children under 6 months of age.

The dose for children is 10 mg / kg, the drug is used as a single daily dose for 3 days.

For children weighing more than 45 kg: the dose is appropriate for adult patients.

For patients with mild to moderate hepatic impairment, no dose adjustment is required. Since azithromycin is metabolized in the liver and excreted in the bile, the drug is contraindicated in patients with severe liver disease. There is no information available on the use of the drug for more severe liver disorders (Child-Pugh class C).

To prepare 30 ml of the suspension, 15 ml of water is added to a bottle containing 1200 mg of azithromycin using a measuring cup.

The prepared suspension should be stored at a temperature not exceeding 25 ° C for no more than 5 days.

Before each intake, the contents of the bottle are thoroughly shaken until a homogeneous suspension is obtained.

Immediately after taking the suspension, the child is given a few sips of tea or juice in order to rinse and swallow the remaining amount of the suspension in the mouth.

After use, the measuring cup and measuring spoon are washed with running water, dried and stored together with the preparation.

There is no need for courses of treatment longer than those recommended in the instructions for use.

Stomach upset, diarrhea/loose stools, nausea, vomiting, or abdominal pain may occur. If any of these effects persist or worsen, tell your doctor or pharmacist promptly.

Get medical help right away if any of these rare but serious side effects occur: fast/irregular heartbeat, severe dizziness, fainting.

This medication may rarely cause a severe intestinal condition (Clostridium difficile-associated diarrhea) due to a resistant bacteria. This condition may occur during treatment or weeks to months after treatment has stopped. Do not use anti-diarrhea or opioid medications if you have any of the following symptoms because these products may make them worse. Tell your doctor right away if you develop: persistent diarrhea, abdominal or stomach pain/cramping, blood/mucus in your stool.

Use of this medication for prolonged or repeated periods may result in oral thrush or a new yeast infection. Contact your doctor if you notice white patches in your mouth, a change in vaginal discharge, or other new symptoms.

– hypersensitivity to azithromycin, erythromycin, macrolides, ketolide antibiotics or other components of the drug
– severe violations of liver and kidney function
– lactation period
– joint administration with ergotamine derivatives (due to the theoretical possibility of ergotism)
– combined use with antacids
– rare hereditary forms of fructose intolerance, sucrase-isomaltase deficiency or glucose-galactose malabsorption syndrome (due to sucrose content)
– diabetes
– children’s age up to 6 months

Antacids: when studying the effect of the simultaneous use of antacids on the pharmacokinetics of azithromycin, no changes in bioavailability were noted, although the maximum the concentration of azithromycin in the blood plasma decreased by 25%. Patients should not take azithromycin and antacids at the same time.

Cetirizine: in healthy volunteers, co-administration of a 5-day course of azithromycin with cetirizine 20 mg at equilibrium did not lead to a pharmacokinetic interaction and a significant change in the QT interval.

Zidovudine: with a single use of 1000 mg and repeated use of 1200 mg or 600 mg of azithromycin, an insignificant effect on the plasma pharmacokinetics or urinary excretion of zidovudine or its glucuronide metabolites was revealed. However, taking azithromycin increased the concentration of phosphorylated zidovudine (a clinically active metabolite) in peripheral blood mononuclear cells. The clinical significance of these indicators remains uncertain, but they may be useful to patients.

Ergotamine derivatives: due to the theoretical possibility of the development of ergotism, the simultaneous use of azithromycin with ergot derivatives is not recommended. Pharmacokinetic studies were performed with azithromycin and the following drugs with known cytochrome P450-mediated metabolism.

Carbamazepine: in a study of the pharmacokinetic interaction of azithromycin in healthy volunteers, the drug did not significantly affect the level of carbamazepine in the blood plasma or its active metabolites.

Coumarin oral anticoagulants: In pharmacokinetic interaction studies, azithromycin does not alter the anticoagulant effect of a single 15 mg dose of warfarin administered to healthy volunteers. In the post-marketing period, there were reports of increased anticoagulation after co-administration of azithromycin and oral coumarin anticoagulants. Although a causal relationship has not been established, the frequency of prothrombin time monitoring should be considered when prescribing azithromycin to patients receiving oral anticoagulants such as coumarin.

Efavirenz: Co-administration of a single dose of azithromycin 600 mg and 400 mg efavirenz per day for 7 days does not result in clinically significant pharmacokinetic interactions.

Indinavir: co-administration of a single 1200 mg dose of azithromycin did not have a statistically significant effect on the pharmacokinetics of indinavir administered at a dosage of 800 mg three times daily for 5 days.

Midazolam: co-administration with azithromycin 500 mg / day for 3 days does not cause clinically significant changes in the pharmacokinetics and pharmacodynamics of a single dose of 15 mg of midazolam.

Nelfinavir: co-administration of azithromycin (1200 mg) and nelfinavir in equilibrium condition (750 mg three times daily) resulted in an increase in azithromycin concentration. No clinically significant side effects were observed and dose adjustment is not required.

Rifabutin: the simultaneous use of azithromycin and rifabutin did not affect the concentration of these drugs in blood plasma.

Sildenafil: There was no evidence of the effect of azithromycin (500 mg daily for 3 days) on the AUC and Cmax of sildenafil or its main circulating metabolite.

Terfenadine: No interaction between azithromycin and terfenadine has been reported in pharmacokinetic studies. In some cases, it is not possible to completely exclude the possibility of interaction. However, there was no concrete evidence that such an interaction took place.

Theophylline: There is no evidence of a clinically significant pharmacokinetic interaction between azithromycin and theophylline when used simultaneously.

Interaction of combined oral contraceptives (COCs) and broad-spectrum antibiotics: there is an “intermediate level” indicating that the contraceptive effectiveness of COCs does not depend on the joint administration (use) of azithromycin.

The duration of the drug should not exceed the time specified in the instructions.

As with other macrolides, the development of rare serious allergic reactions, such as Quincke’s edema and anaphylaxis (in exceptional cases with a fatal outcome), have been reported. Some of these reactions lead to the development of recurrent symptoms and require longer monitoring and treatment.

The liver is the main organ where azithromycin is metabolized, therefore Ziromin must be prescribed with caution in patients with severe liver disease. If signs and symptoms of liver dysfunction develop, such as rapidly developing asthenia associated with jaundice, dark urine, bleeding tendencies, or hepatic encephalopathy, liver function tests / tests should be performed immediately. With the development of liver dysfunction, taking Ziromin should be discontinued and consult a doctor.

Prolongation of the QT interval

Care should be taken when using Ziromin in patients at risk of developing arrhythmias (especially in elderly patients), as well as:

– with congenital or acquired lengthening of the QT interval;

– in case of violation of the water-electrolyte balance, especially in the case of hypokalemia or hypomagnesemia;

As with any antibiotic, it is advisable to watch for signs of superinfection with resistant organisms, including fungi. Treatment with antibacterial drugs alters the normal gut flora, leading to overgrowth of C. difficile. Clostridium difficile diarrhea has been reported with all antibacterial drugs, including azithromycin, and can range from mild diarrhea to severe colitis. Pseudomembranous enterocolitis should be considered in all patients who present with diarrhea after antibiotic use. In these cases, a careful history taking is necessary, especially if diarrhea appeared within the first two months after using the antibacterial drug.

Azithromycin is not the first choice for empiric treatment of infections in areas with a high prevalence of resistant strains (10% or more). In areas with a high incidence and resistance to erythromycin, it is especially important to consider the change in sensitivity to azithromycin and other antibiotics. As for other macrolides, high rates of resistance of azithromycin to Streptococcus pneumoniae (> 30%) have been reported in some European countries. This should be considered when treating infections caused by Streptococcus pneumoniae.

In patients with severe renal impairment (glomerular filtration rate <10 ml / min), a 33% increase in systemic exposure to azithromycin was observed.

The use of the drug Ziromin can provoke the development of myasthenia gravis or cause its exacerbation.

The drug Ziromin contains 3.9 g of sucrose in 5 ml of a diluted suspension, this must be taken into account in patients with hereditary intolerance to fructose, glucose or galactose, sucrase-isomaltase deficiency and patients with diabetes who should not take this drug.

Azithromycin can be used during pregnancy only in cases where the expected benefit to the mother outweighs the potential risk to the fetus.