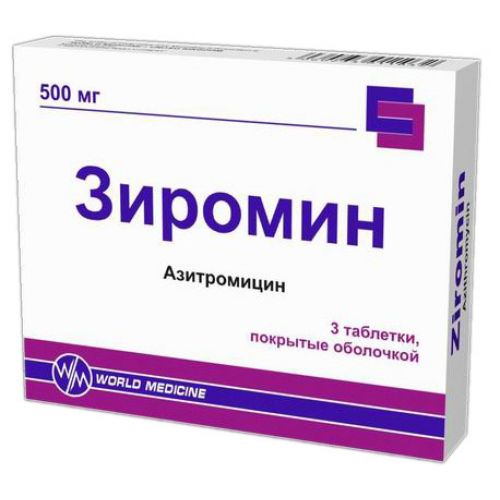 The description
of the Tablet, coated white color, a capsulovidny form with an engraving of AZN500 on one party and dividing risky on another.

the Pharmacological
Pharmacokinetics Absorption properties happens quickly and completely after intake. Meal authentically reduces degree (to 50%) and absorption speed and therefore azithromycin should be accepted for an hour before meal or in 2 hours after that. Time of achievement of the maximum plasma concentration – 2-3 hours.
Distribution results from intensively high extent of penetration into fabrics that provides much higher concentration in fabrics, than in plasma (to 50 times). Azithromycin quickly gets into phagocytes and fibroblastny cells and creates high intracellular and extracellular concentrations. Its intra phagocytal concentration remains high after exhaustion of extracellular concentration. In the presence of bacteria in the inflamed fabrics, azithromycin quickly gets into extracellular space. Extent of linking with proteins of plasma about 20%. Metabolism is carried out in a liver by means of demethylation. Elimination half-life – 48 – 96 hours.
Removal. It is removed, generally with bile in not changed look.
Small amounts are removed with urine.

the Contraindication photosensitization
– hypersensitivity to antibiotics of group of macroleads
– children up to 12 years
– heavy abnormal liver functions and kidneys
– pregnancy.

Medicinal interactions
Antacids (aluminum and magnesium containing), ethanol and food slow down and reduce absorption.
At joint prescribing of Warfarin and Ziromin (in usual doses) changes of a prothrombin time it is not revealed, however, considering that in interaction of macroleads and warfarin strengthening of anti-coagulative effect is possible, careful control of a prothrombin time is necessary for patients.
Digoxin: increase in concentration of digoxin.
Ergotamine and dihydroergotamine: strengthening of toxic action (vasospasm, dizesteziya).
To triazoles: decrease in clearance and increase in pharmacological action of a triazolan.
Slows down removal and increases concentration in blood plasma and toxicity of Cycloserinum, indirect anticoagulants, Methylprednisolonum, a felodipin and also the medicines which are exposed to microsomal oxidation (carbamazepine, terfenadin, cyclosporine, hexobarbital, ergot alkaloids, valproic acid, Disopyramidum, Bromocriptinum, Phenytoinum, oral hypoglycemic means, theophylline, etc. ksantinovy derivatives) – at the expense of inhibition of microsomal oxidation in hepatocytes by Ziromin. Linkozamina weaken efficiency, tetracycline and chloramphenicol – strengthen.

The special
instructions Be careful when prescribing drug the patient with insufficiency of function of a liver and kidneys. Pregnancy and a lactation
At pregnancy drug should be used only when the expected advantage exceeds potential risk. At use of drug in the period of a lactation it is necessary to stop breastfeeding.
The feature of influence of medicine on ability to run the vehicle or potentially dangerous Ziromin mechanisms does not affect ability to driving of motor transport and control of dangerous mechanisms.

A form of release and packing
On 3 tablets in blister strip packaging from a film of polyvinylchloride and aluminum foil.
On 1 planimetric packing together with the instruction for medical use in the state and Russian languages put in a cardboard box.

To Store storage conditions in the dry place at a temperature not above 25 °C.
To store out of children’s reach!

the Producer
it Is made ‘BAILEY LABORATORY – KPEAT’, France (Shmen de Nouizmen of Z | I. 150 Arpen, 28500 Vernuye – Frans) according to the license ‘MEDRAYK’, Great Britain.

to Develop the Address of the organization accepting in the territory of the Republic of Kazakhstan claims from consumers on quality of products (goods) of RK Almaty, Suyunbaya 222 Ave. of B