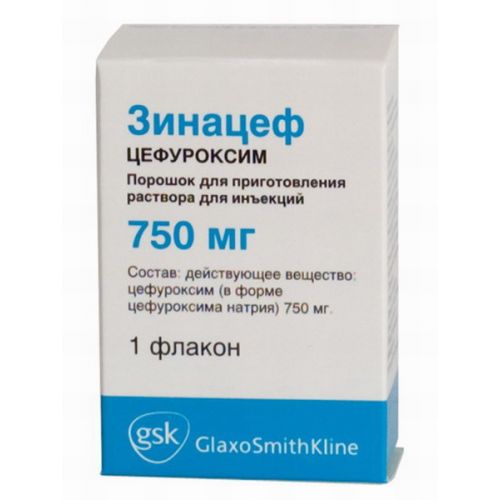 the Trade name
of Zinatsef®

name Tsefuroksim Lekarstvennaya a form
Powder for preparation of solution for injections, 750 mg

Structure
One bottle contains
active agent – tsefuroksy sodium of 789 mg, is equivalent to a tsefuroksim of 750 mg.

The description
Powder from white till cream color.

Pharmacokinetics Absorption At properties in oil administration of the drug Cmax of a tsefuroksim is reached in 30-45 minutes after an injection.
Distribution
makes Communication with proteins of plasma from 33% to 50% (depending on a measurement method).
The concentration of a tsefuroksim exceeding the minimum overwhelming concentration for the majority of microorganisms are present at a bone tissue, synovial and intraocular liquids.
Tsefuroksim gets through a blood-brain barrier at inflammation of meningeal covers.
Metabolism
Tsefuroksim is not metabolized and removed by means of the renal mechanism by glomerular filtration and canalicular secretion.
Removal
Elimination half-life of a tsefuroksim after parenteral administration makes about 70 minutes.
At newborn children in the first weeks of life the elimination half-life of a tsefuroksim can be 3-5 times more long, than at adults.
Within 24 hours after parenteral administration tsefuroksy almost completely (85 – 90%) the most part of drug is removed with urine in not changed look, and – within the first 6 hours.
At competitive purpose of a probenetsid the removal of a tsefuroksim slows down that leads to increase in its level in plasma serum.
Serumal levels of a tsefuroksim decrease at dialysis.
The pharmacodynamics
of Zinatsef® belongs to tsefalosporinovy antibiotics of the II generation. Зинацеф® has bactericidal activity concerning a wide range of activators, including the strains producing β-lactamazu.
Зинацеф® ampicillin – and amoksitsillinustoychivy strains is active in the relation.
Bactericidal effect of the drug Zinatsef® is connected with suppression of synthesis of a cell wall of bacteria as a result of linking with the main proteins targets.
The prevalence of the acquired resistance depends on a geographical location and time, and for some types can be very high. It is recommended to address local data on resistance of strains, especially in case of treatment of heavy infections.
Зинацеф® it is active concerning the following microorganisms:

(*) it was shown clinical effektivnostv the course of clinical trials

the Majority of sensitive strains

Proteus mirabilis Proteus spp. not including P. penneri and

Indications
Treatment of the infectious diseases caused by bacteria, sensitive to a tsefuroksim, or until definition of the infectious agent. The sensitivity to a tsefuroksim varies depending on a geographical location and time in this connection it is recommended to address whenever possible local data on sensitivity of microorganisms to antibiotics.
– infections of upper and lower airways (including acute and chronic bronchitis, bacterial pneumonia, abscess of lungs, postoperative infectious diseases of bodies of a thorax)
– infections of an ear, a throat, a nose (including sinusitis, tonsillitis, pharyngitis, average otitis)
– infections of urinary tract (including acute and chronic pyelonephritis, cystitis, a symptomless bacteriuria)
– infections of skin and soft tissues (including cellulitis, erysipelatous inflammation and wound fevers)
– infections of bones and joints (including osteomyelitis and septic arthritis)
– infections in gynecology and obstetrics (including inflammatory diseases of bodies of a small pelvis)
– gonorrhea (in particular at impossibility of use of penicillin)
– a septicaemia
– meningitis
– peritonitis
– prevention of infectious complications at abdominal organs surgeries, a small pelvis, at orthopedic operations, heart surgeries, lungs, a gullet and vessels in the presence of the increased risk of developing infections.
In most cases the drug Zinatsef® is used as monotherapy, but also can be applied in combination with aminoglikozidny antibiotics or in a combination with metronidazole, especially to prevention of infections at a large intestine surgeries and in gynecology.
In case of need the drug Zinatsef® can be used before transition to the Zinnat® drug treatment in the form of suspension or tablets at therapy of pneumonia and exacerbation of chronic bronchitis.

Side effects
Side reactions happen very seldom and have passing character.
Undesirable reactions differ on frequency according to the following classification: very often ≥1/10, it is frequent ≥1/100 – & lt, 1/10, infrequently ≥1/1000 – & lt, 1/100, is rare ≥1/10000 – & lt, 1/1000, also lt, 1/10000 is very rare.
Often
– a neutropenia, an eosinophilia
– tranzitorny increase in liver enzymes
– reactions in the place of an injection (pain, thrombophlebitis)
Bol after intramuscular introduction arises at introduction of high doses more often, nevertheless it should not serve as the reason for treatment cancellation.
Infrequently
– a leukopenia, decrease in concentration of hemoglobin, the false positive test of Koombs
– skin rash, a small tortoiseshell, an itching
– digestive tract disorder
– tranzitorny increase in level of bilirubin (especially at patients with the previous liver pathology)
Is rare
– the increased growth of mushrooms of the sort Candida
– thrombocytopenia
– fever of a medicinal etiology
Very seldom
– hemolytic anemia
Cephalosporins belong to the class of antibiotics which are adsorbed on a surface of membranes of erythrocytes and interact with the antibodies directed to this medicinal substance that can lead to false positive reaction of Koombs or hemolytic anemia.
– intestinal nephrite
– an anaphylaxis
– a skin vasculitis
– pseudomembranous colitis
– an exudative multiformny erythema, Stephens-Johnson’s syndrome, a toxic epidermal necrolysis
– increase in level of creatinine, urea nitrogen and decrease in clearance of creatinine

Special instructions
With care patients should appoint drug with anaphylactic reaction to penicillin and others beta laktamnye antibiotics in the anamnesis. At a concomitant use with aminoglycosides and diuretics the risk of emergence of nephrotoxic effects therefore it is necessary to control function of kidneys at use of such combination of drugs, especially at patients of advanced age, patients with diseases of kidneys and at the patients receiving drug in a high dose increases.
At treatment of meningitis the drug Zinatsef® at some children noted decrease in hearing easy and moderate severity, at the same time in cerebrospinal liquid the positive cultures of Haemophilus influenzae in 18-36 hours of therapy were defined. The similar phenomena were noted also at use of other antibiotics, but their clinical value is unknown.
As well as in case of use of other antibiotics, at use of a tsefuroksim the possible excess growth of mushrooms of the sort Candida. Long use of drug can lead to growth of insensitive strains (Enterococci, Clostridium difficile) that can demand the treatment termination.
Pseudomembranous colitis is observed when using a wide range of antibiotics which severity can vary from easy to life-threatening. Therefore, it is very important to mean a possibility of its emergence at patients with the heavy diarrhea which arose in time or after a course of treatment antibiotics. If at the patient the long or considerable diarrhea is observed, spasms in a stomach, treatment has to be cancelled immediately and the patient has to be directed to further inspection.
At step therapy time of transition to oral therapy is defined by weight of an infection, a clinical condition of the patient and sensitivity of the activator. If upon transition to an oral form there does not occur improvement of a state after 72 hours of use, it is necessary to transfer the patient to a parenteral way of introduction of an antibiotic again.
Upon transition to other forms of a tsefuroksim attentively study the instruction for use of drug.
Pregnancy and the period of a lactation
of Embriotoksichesky and teratogenic influence of drug on a fruit is not observed, but, as well as with other drugs, the drug Zinatsef® should be used with care in the first trimester of pregnancy.
Tsefuroksim is allocated with breast milk therefore nursing mothers should show care when prescribing drug.

There Is no feature of influence of medicine on ability to run the vehicle or potentially dangerous mechanisms messages.

The form of release and packing
On 750 mg of drug place in the glass bottles like I or III which are hermetically corked by the traffic jams brombutilovy or butyl laminated by fluoroelastomer, pressed out by caps aluminum with detachable plastic covers.
On 1 bottle together with the instruction for medical use in the state and Russian languages place in a pack from cardboard.

Period of storage
2 years.
Not to use after an expiration date.

the Producer GlaksoSmitKlyayn Manyufacturing S. of the item. And., Italy
Via A. Fleming, 2-37135, Verona

Packer S. GlaksoSmitKlyayn Manyufacturing of the item. And., Italy
Via A. Fleming, 2-37135, Verona 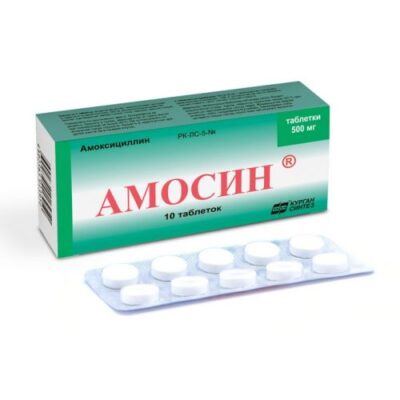 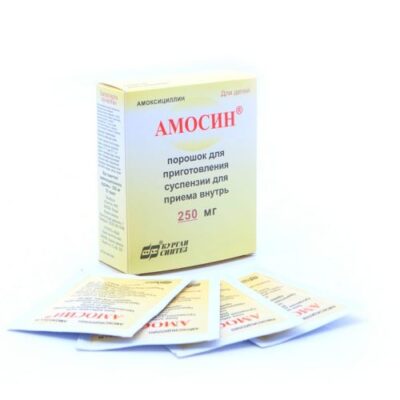 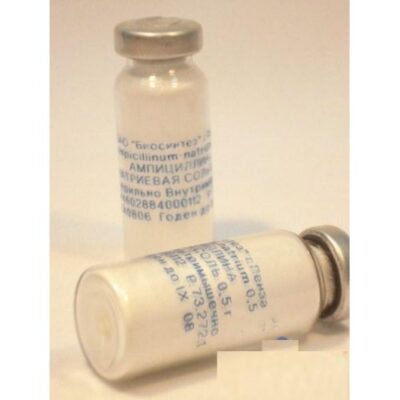