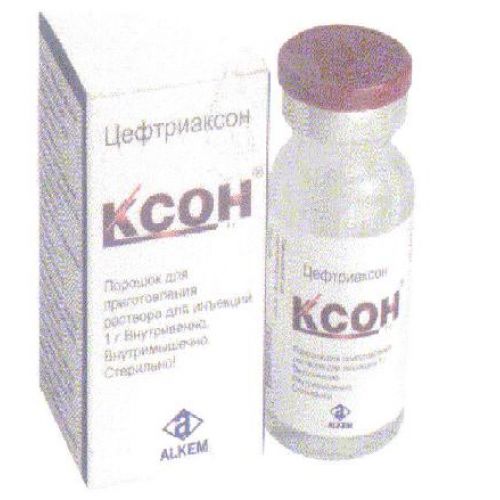 the Description
From white till yellowish-orange color crystal powder

Indications
the Bacterial infections caused by sensitive microorganisms:
– peritonitis
– sepsis
– meningitis
– infections of abdominal organs (inflammatory diseases of digestive tract, biliary tract, including a cholangitis, an empyema of a gall bladder)
– diseases of upper and lower airways (including pneumonia, abscess of lungs, a pleura empyema)
– infections of bones and joints
– infections of skin and soft tissues
– infections of urinary tract (including pyelonephritis)
– gonorrhea
– contaminated wounds and burns
Prevention of a postoperative infection. Infectious diseases at persons with the weakened immunity.

The route of administration and doses
administer the Drug intramusculary or intravenously.
For adults and children 12 years an average daily dose are more senior makes 1-2 g of a tseftriakson of 1 times a day. In hard cases or in infections which causative agents have sensitivity to a tseftriakson it is possible to increase a daily dose to 4 g.
For newborns (to two-week age) the dose makes 20-50 mg/kg/days.
For babies and children up to 12 years the daily dose makes 20-80 mg/kg. Children with body weight have 50 kg and apply doses to adults more.
It is necessary to appoint a dose more than 50 mg/kg of body weight in the form of intravenous infusion. Duration of a course of treatment depends on the nature of a disease.
In bacterial meningitis at babies and children of younger age the initial dose makes 100 mg/kg of 1 times a day. The maximum daily dose – 4 g.
For treatment of gonorrhea the dose makes 250 mg, once intramusculary.
For prevention of infections in the preoperative and postoperative periods in 30-90 min. prior to operation enter 1-2 g of a tseftriakson.
In a renal failure (clearance of creatinine less than 50 ml/min.) the daily dose of a kson should not exceed 1 g. In the profound abnormal liver functions and kidneys and also at the patients who are on a hemodialysis it is necessary to watch concentration of a kson in blood plasma since at them the speed of its discharge can decrease.
Rules of preparation and administration of drug
For preparation of solution for intramuscular introduction of 1 g of powder part 3.5 ml of 1% of solution of lidocaine. Solution is entered deeply into a gluteus. The received solution cannot be entered intravenously!
For preparation of solution for intravenous administration of 1 g of powder part 10 ml of the sterile distilled water and enter intravenously slowly within 2-4 min.
For preparation of solution for intravenous infusion of 2 g of powder it is necessary to part about 40 ml of solution free from calcium, for example: 0.9% solution of sodium of chloride, 5% solution of glucose, 10% solution of glucose, 5% levuloza solution. Duration of intravenous infusion – 30 min.

Side effects
– about 2%: diarrhea, nausea, vomiting, stomatitis, a glossitis, development of a psevdokholetiaz, an eosinophilia, a leukopenia, a granulocytopenia, hemolytic anemia, thrombocytopenia
– about 1% is possible: a dieback, allergic dermatitis, a small tortoiseshell, hypostasis, a multiformny erythema
– seldom: a headache, dizziness, increase in activity of enzymes of a liver, pain in right hypochondrium, fever, anaphylactic reactions, an oliguria, increase in content of creatinine in blood serum, mycoses of anogenitalny area, candidiasis of genitals, an oliguria
– in isolated cases: fibrillation disturbance, a pseudomembranous coloenteritis
After intravenous administration in certain cases: phlebitis, an itching in the place of an injection (this phenomenon can be avoided at slow / during 2-4 mines / administration of drug).
Side effects, as a rule, of a tranzitorna also disappear after drug withdrawal.

Contraindications
– hypersensitivity to a tseftriakson and penicillin
– pregnancy (I trimester) and the lactation period
– cholelithiasis
– existence in the anamnesis of a coloenteritis and bleeding.

Medicinal interactions
Kson and aminoglycosides have synergism concerning many gram-negative bacteria, however at simultaneous introduction with ftorkhinolona, Vancomycinum, rifampicin (but not in one syringe) the risk of crystallization in uric ways increases. At simultaneous use with loopback diuretics (for example, furosemide), disturbances of functions of kidneys are not observed. At simultaneous introduction with Euphyllinum drops out in a deposit.
Kson pharmaceutical is incompatible with the solutions containing other antibiotics.

The special
instructions Drug it is used only in the conditions of a hospital. At Kson’s use it is necessary to consider a likelihood of development of an acute anaphylaxis. In case of its development it is necessary to enter immediately intravenously adrenaline, and then glucocorticoid means.
In a simultaneous heavy renal and liver failure it is regularly necessary to define concentration of drug in blood plasma. At long-term treatment it is regularly necessary to control a pattern of peripheral blood, indicators of a functional condition of kidneys and to gradually reduce a drug dose.
It is necessary to consider that sometimes at ultrasonography of a gall bladder the existence of the shadow indicating adjournment of precipitation is noted. This symptom disappears after the termination or the temporary termination of therapy tseftriaksony. At a pain syndrome in similar cases the surgical intervention is not required, carry out conservative treatment. Alcohol intake during therapy has similar effect.
Use in pediatrics
Kson is capable to force out the bilirubin connected with blood serum albumine. Therefore at newborns with a hyperbilirubinemia and, especially at premature newborns, use of a tseftriakson demands extra care.
Pregnancy and a lactation
Drug is contraindicated to use in the I trimester of pregnancy. Kson’s use in II and III trimesters of pregnancy and in the period of a lactation perhaps only if the expected advantage for mother exceeds potential risk for a fruit or the child. When assigning in the period of a lactation it is necessary to cancel breastfeeding.
Influence on ability to driving of motor transport and to control of mechanisms
it is necessary to resolve the Issue of a possibility of occupations by potentially dangerous types of activity only after assessment of individual reaction of the patient to drug.

Overdose
Symptoms: strengthening of side effects.
Treatment: symptomatic. The hemodialysis and peritoneal dialysis are inefficient.

Form of release and packing
Powder for preparation of solution for injections, on 1 g in the glass bottle corked by a rubber bung, the pressed-out aluminum cap and closed by the protecting plastic cap. On 1 bottle together with the instruction for use place in a cardboard box.

Storage conditions
Drug should be stored in the dry, protected from light place at a temperature not above +25 °C.
To store drug out of children’s reach!