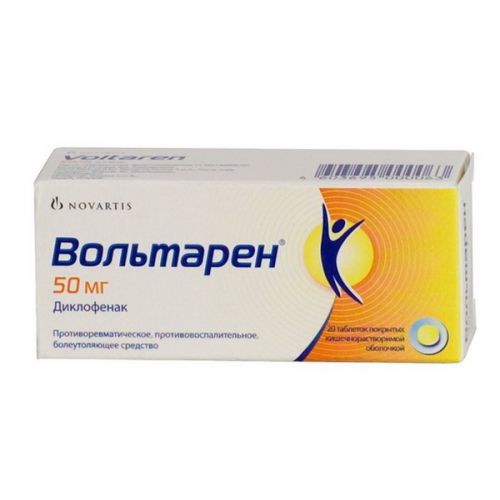 the Trade name
of Voltaren

name Diclofenac Dosage Form
of the Tablet, covered with a kishechnorastvorimy cover, 50 mg

The description of a dosage form
of the Tablet of round shape, with a biconvex surface, coated, light brown color, with a facet, an engraving of CG on one party and GT on other party.

Pharmacokinetics Later properties of intake of the tablets covered with a kishechnorastvorimy cover, diclofenac completely is soaked up after passing through a stomach. In case of reception of a tablet of drug in time or after a meal, its passing through a stomach slows down (in comparison with reception to food), but the amount of the soaking-up diclofenac does not change. After single dose of 50 mg of drug the maximum concentration in plasma is noted in 2 hours and makes 1.5 mkg/ml (5 µmol/l). Extent of absorption is in direct dependence on dose size. After repeated administrations of drug the indicators of pharmacokinetics do not change. Therefore if the recommended intervals between receptions of doses of drug are observed, cumulation is not noted. Linking with serum proteins makes 99.7%. Binding happens mainly to albumine (99.4%). The seeming volume of distribution is 0.12-0.17 l/kg. Diclofenac gets into synovial fluid where its maximum concentration is reached at 2-4 o’clock later, than in blood plasma. The seeming elimination half-life makes 3-6 hours of synovial fluid. In 2 hours after achievement of the maximum concentration in plasma the concentration of diclofenac in synovial fluid is higher, than in plasma, and its values remain higher throughout a span till 12 o’clock.
Metabolism of diclofenac is carried out partially by a glyukuronization of not changed molecule, but, mainly, by means of a single and repeated metoksilirovaniye that leads to formation of several phenolic metabolites (3′ – hydroxy, 4 ‘-hydroxy, 5′ – hydroxy, 4’, 5-digidroksi- and 3 ‘-hydroxies-4 ‘-metoksidiklofenaka), the majority of which turns into glyukuronidny conjugates. Two of these phenolic a metabolite are biologically active, but in much smaller degree, than diclofenac. The general system plasma clearance of diclofenac is 263±56 ml/min. Final elimination half-life makes 1-2 hours. Elimination half-life of 4 metabolites, including two pharmacological active, is also short and makes 1-3 hours. One of pharmacological inactive metabolites, 3 ‘-hydroxies-4 ‘-metoksi-diclofenac, has longer elimination half-life.
About 60% of the applied dose of drug are removed with urine in the form of glucuronic conjugates of not changed active agent and also in the form of metabolites, the majority of which is represented by glucuronic conjugates. In not changed look less than 1% of diclofenac are removed. The rest of the applied dose of drug is removed in the form of metabolites through bile, with a stake.
After intake or rectal administration of AUC diclofenac decreases twice as about a half of a dose of diclofenac is metabolized during the first passing through a liver. In plasma at reception of equivalent doses of diclofenac children (body weight mg/kg) had a similar to concentration of drug concentration of drug at adults.
The pharmacokinetics at separate groups of patients
After administration of drug in the differences in absorption, metabolism or removal of drug connected with age patients is not noted.
At patients with a renal failure when prescribing the drug Voltaren® in usual single doses of accumulation of diclofenac it was not noted. In case the clearance of creatinine is less than 10 ml/min., estimated equilibrium concentration of hydroxymetabolites of diclofenac are about 4 times higher, than at healthy patients.
At patients with chronic hepatitis or the compensated cirrhosis the indicators of pharmacokinetics of diclofenac are similar to that at patients without liver diseases.
The pharmacodynamics
of Voltaren® contains sodium diclofenac, the substance of nonsteroid structure rendering the significant antirheumatic, anti-inflammatory, analgeziruyushchy and febrifugal action. The main mechanism of effect of diclofenac is slowing down of biosynthesis of prostaglandins playing an important role in genesis of inflammation, pain and fever.
In rheumatic diseases of Voltaren®, showing anti-inflammatory and analgetic effects, considerably reduces pain at rest and at the movement, morning constraint and a swelling of joints and also improve functions of joints.
Diclofenac of sodium does not suppress biosynthesis of proteoglycans of cartilaginous tissue.
At the posttraumatic and postoperative inflammatory phenomena of Voltaren® kills pain (both spontaneous, and arisen at the movement), reduces inflammatory hypostasis and hypostasis of the postoperative field.
The considerable analgetic effect of drug at the moderate and expressed pain syndrome of not rheumatic genesis is revealed. It is also established that Voltaren® is capable to eliminate pain and to reduce blood loss at primary dysmenorrhea.
Вольтарен®, besides, has favorable effect on manifestations of attacks of migraine.

Indications
– inflammatory and degenerative forms of rheumatic diseases: the pseudorheumatism, a juvenile pseudorheumatism, an osteoarthritis, a spondylarthritis ankylosing a spondylitis (Bekhterev’s disease), pain syndromes in diseases of a backbone of rheumatic origin
– bad attacks of gout
– posttraumatic and postoperative pain syndromes
– the gynecologic diseases which are followed by a pain syndrome and inflammation (for example, primary dysmenorrhea and an adnexitis)
– as a part of complex therapy in the serious inflammatory illness of an ear, throat and nose proceeding with the expressed pain syndrome (pharyngitis, tonsillitis, otitis, a frontal sinusitis, antritis)

of the Contraindication
– hypersensitivity to diclofenac and any other ingredients of drug
– a peptic ulcer of a stomach or intestines in a stage of aggravation, bleeding or perforation
– pregnancy and the period of breastfeeding
– a liver failure
– a renal failure
– heavy heart failure
– existence in the anamnesis of the attacks of asthma, urticaria, acute rhinitis connected with use of acetylsalicylic acid or other non-steroidal anti-inflammatory drugs
– diseases of the haematogenic system
– treatment of postoperative pain after operation of coronary shunting or use of the cardiopulmonary bypass
– the children’s age up to 14 years

Medicinal interactions
Strong CYP2C9 inhibitors
Is recommended to be careful when prescribing diclofenac together with strong CYP2C9 inhibitors (such as vorikonazol) that can lead to significant increase in the maximum concentration in blood plasma and exposure to diclofenac because of diclofenac metabolism inhibition.
Lithium,
Voltaren® digoxin can increase concentration of lithium and digoxin in blood plasma. It is recommended to control the level of lithium and digoxin in blood serum.
Diuretic means
of Voltaren® as well as other non-steroidal anti-inflammatory drugs (NPVP), the expressiveness of diuretic action can reduce. Simultaneous use of kaliysberegayushchy diuretics can lead to increase in level of potassium in blood serum (in case of such combination of medicines this indicator should be controlled regularly).
Medicines which, as we know, cause a hyperpotassemia
the Accompanying treatment by kaliysberegayushchy diuretics cyclosporine, takrolimusy or Trimethoprimum can be associated with the increased potassium levels in serum that, therefore, has to be controlled regularly.
NPVP and corticosteroids
Simultaneous system use of non-steroidal anti-inflammatory drugs (NPVP) can increase the frequency of emergence of the undesirable phenomena.
Anticoagulants
Though in clinical trials it is not established influences of the drug Voltaren® on effect of anticoagulants, there are separate messages about increase in risk of bleedings at the patients accepting at the same time Voltaren® and these drugs. Therefore, in case of such combination of medicines, careful and regular observation of patients is recommended.
The Selective Serotonin Reuptake Inhibitors (SSRI)
Combined use of system NPVS, including diclofenac, and SIOZS can increase risk of gastrointestinal bleeding.
Antidiabetic drugs
At simultaneous use of the drug Voltaren® and antidiabetic drugs, the efficiency of the last does not change. However separate messages about development both a hypoglycemia, and a hyperglycemia, the glucose-lowering drugs demanding need of change of a dose are known during drug Voltaren® use.
Phenytoinum
When using Phenytoinum together with diclofenac, is recommended to carry out monitoring of concentration of Phenytoinum in blood plasma because of the expected increase in extent of exposure to Phenytoinum.
A methotrexate
It is necessary to be careful when prescribing non-steroidal anti-inflammatory drugs (NPVP) less than in 24 hours prior to or after reception of a methotrexate as in such cases the concentration of a methotrexate in blood can increase and amplify its toxic action.
Cyclosporine
Influence of non-steroidal anti-inflammatory drugs (NPVP) on synthesis of prostaglandins in kidneys can increase nephrotoxicity of cyclosporine
Antibacterial agents – derivatives of a hinolon
Are available separate messages about development of spasms in the patients receiving at the same time derivative a hinolon and non-steroidal anti-inflammatory drugs (NPVP).

Overdose
Symptoms: vomiting, gastrointestinal bleeding, diarrhea, dizziness, sonitus or spasms. In case of a serious poisoning the development of an acute renal failure and injury of a liver is possible.
Treatment: the supporting and symptomatic therapy. Use of an artificial diuresis, hemodialysis or hemoperfusion are ineffective for removal of non-steroidal anti-inflammatory drugs (NPVP) as active agents of these drugs substantially contact proteins of plasma and are exposed to intensive metabolism. It is possible to consider the possibility of use of activated carbon at drug overdose and also gastric decontamination (for example, vomiting, gastric lavage).

The form of release and packing
On 10 tablets place in blister strip packaging from a transparent colourless film polyvinylchloride/polyethylene/polyvinylidene chloride and the printing aluminum foil varnished.
On 2 planimetric packs together with the instruction for medical use in the state and Russian languages put in a cardboard pack.

To Store storage conditions at a temperature below 30 wasps, to protect from moisture influence.
To store out of children’s reach!

3 years
not to apply a period of storage after the expiry date specified on packing.

the Name and the country of the owner of the registration certificate
of Novartis Pharm AG, Switzerland
the Address of the organization accepting claims from the consumer on quality of a product (goods) and responsible for post-registration observation of safety of medicine in the territory of the Republic of KazahstanFilial Novartis Pharm Servisez AG in Almaty, Luganskogo St., 96 Kazakhstane050051 ph.: (727) 258-24-47 fax: (727) 244-26-51e-mail:
To Develop drugsafety.cis@novartis.com