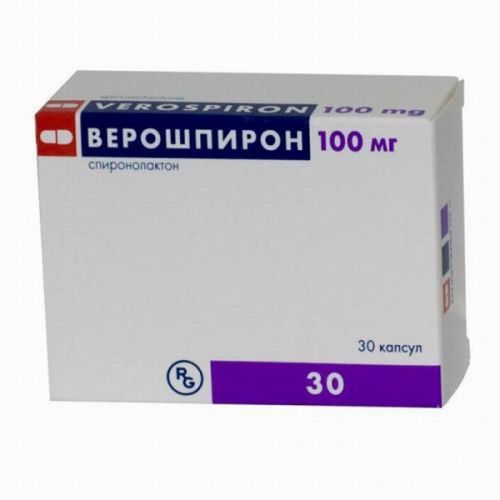 Composition of the capsule shell 100 mg

– congestive heart failure (in cases where the patient does not respond to treatment with other diuretics or there is a need to potentiate their effects)
– essential arterial hypertension (mainly in cases of hypokalemia, usually in combination with other antihypertensive drugs)
– cirrhosis of the liver, accompanied by edema and / or ascites
– treatment of primary hyperaldosteronism
– edema due to nephrotic syndrome
– treatment of hypokalemia in cases of impossibility to receive other therapy
– prevention of hypokalemia in patients receiving cardiac glycosides (in cases where other approaches are considered inappropriate or inappropriate)

In cases of diagnosed primary hyperaldosteronism, the drug can be prescribed in preparation for surgery at a dose of 100-400 mg. In patients in whom surgery is not planned, the drug can be used as a long-term maintenance therapy at the lowest effective dosage determined individually. In the situation described, the initial dose can be reduced every 14 days until the minimum effective dose is reached. In cases of long-term use, it is recommended to use in combination with diuretics of other groups to reduce side effects.
Edema (congestive heart failure, nephrotic syndrome)
Adults: The initial daily dose is 100 mg (25-200 mg) and is given in one or two doses.
In the case of prescribing higher doses, Veroshpiron® can be taken in combination with other groups of diuretics acting in the more proximal parts of the renal tubules. In this case, the dosage of Veroshpiron® should be adjusted.
Cirrhosis of the liver with ascites or edema
If the urine Na + / K + ratio is greater than 1, the initial daily dose and maximum daily dose are 100 mg. If this ratio is less than 1, the initial daily dose is 200 mg, the maximum is 400 mg / day. The maintenance dose should be determined individually.
Essential arterial hypertension
The initial daily dose, given in one or two doses, is 50-100 mg and is taken in combination with other antihypertensive drugs. Therapy should be continued for two weeks, since by the end of this period the maximum antihypertensive effect is achieved. Then the dose should be adjusted individually depending on the effect achieved.
Hypokalemia
In patients who do not have enough food supplements with K + or other methods of potassium replacement therapy, the drug is taken in a daily dose of 25-100 mg.
Elderly patients
It is recommended to start treatment with lower doses, followed by a gradual increase until the maximum effect is achieved. It should be taken into account if there are hepatic and renal impairments, since they affect the metabolism of the drug and its excretion.

When used together with:
– other diuretics – increased urine output
– cholestyramine, ammonium chloride – increased risk of hyperkalemia and hyperchloremic metabolic acidosis
– immunosuppressants (tacrolimus and cyclosporine) – increased risk of hyperkalemia
– antihypertensive drugs (especially ganglion blockers) – development of severe hypotension is possible. Thus, it may be necessary to reduce the dose of antihypertensive drugs when added to the treatment regimen Veroshpiron
– alcohol, barbiturates or narcotic drugs – can potentiate orthostatic hypotension caused by spironolactone
– pressor amines (norepinephrine) – Veroshpiron® reduces their effect, this should be taken into account when conducting local or general anesthesia using these drugs
– non-steroidal anti-inflammatory drugs (NSAIDs), in particular, acetylsalicylic acid, indomethacin and mefenamic acid – increased risk of hyperkalemia with a concomitant decrease in the diuretic, natriuretic and antihypertensive action of Veroshpiron®
– glucocorticosteroids, ACTH – a paradoxical increase in potassium excretion
– digoxin – spironolactone is able to increase the half-life of digoxin, which can lead to an increase in its content in blood serum and the development of glycosidic intoxication
– lithium – lithium preparations should not be administered concurrently with diuretics, as they reduce the renal clearance of lithium and may increase the risk of intoxication
– carbenoxolone – may cause sodium retention and thus reduce the effectiveness of spironolactone
– carbamazepine – when taken simultaneously with spironolactone, it can cause the development of clinically significant hyponatremia
– coumarin derivatives – their effect is weakened
– triptorelin, buserelin, gonadorelin – their effects are enhanced

Impact on laboratory results – an effect on the process of determining the concentration of digoxin by radioimmunoassay can be expected.

Verospiron® should be used with extreme caution in patients with diseases that may cause the development of acidosis and / or hyperkalemia. The drug may increase the risk of developing hyperkalemia in patients with diabetic nephropathy.
Therapy with Veroshpiron® may cause a transient increase in serum urea nitrogen, especially in patients with pre-existing renal impairment and hyperkalemia. Verospiron® can cause the development of reversible hyperchloremic metabolic acidosis. Thus, in patients with impaired renal and hepatic function, as well as in elderly patients, biochemical parameters of renal function, as well as electrolyte balance, should be regularly examined.
Therapy with Veroshpiron® may interfere with the determination of serum digoxin, plasma cortisol and epinephrine.
During treatment with Veroshpiron®, alcohol is prohibited.
The dosage form contains lactose. The drug should not be administered to patients with rare congenital forms of lactose intolerance: Lapp lactase deficiency, glucose-galactose malabsorption.
Pregnancy and lactation
The drug is contraindicated during pregnancy and during breastfeeding. If necessary, the appointment of the drug should stop breastfeeding.
Features of the effect of the drug on the ability to drive a vehicle or potentially dangerous mechanisms
At the beginning of treatment, driving of vehicles and dangerous mechanisms should be abandoned for a period of time, the duration of which is determined individually. In the future, this limitation should be approached differentially for each individual patient.

Symptoms: drowsiness / lethargy, confusion, imbalance in water and electrolyte balance.
Treatment: symptomatic, no specific antidote. It is necessary to maintain the water-electrolyte and acid-base balance by prescribing potassium-excreting diuretics, parenteral administration of glucose with insulin, in severe cases – by hemodialysis.